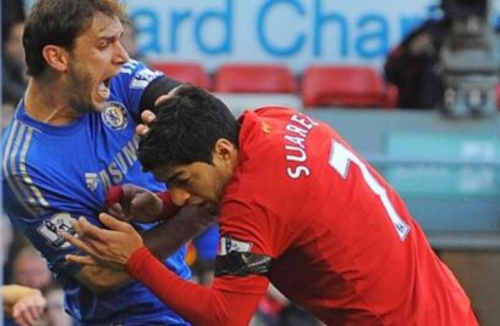 There was a sense of relief yesterday that, apparently, Spygate had at last been put to bed. The general feeling was one of “Aaaaaand relax” – we could now get back to thinking about football and, more specifically, earning a path out of this increasingly ridiculous and corrupt Football League.

Today, though, people are looking at the sheer size of the fine Leeds United have had to accept as the price for concluding what had become a long-running farce. Two hundred thousand pounds. When you look at it, really consider it, that’s an obscenely disproportionate sanction. Some sort of context is afforded when you notice that Russia was fined £22,000 for the racist chanting of its bigoted supporters, and Luis Suárez copped a total of £106,000 for two separate incidents in which he deliberately bit opponents. There are, needless to say, plenty of other illustrative examples.

So, on this basis, being present on public land with footballers training on the other side of a mesh fence is seen as just under twice as heinous as sinking your teeth into two opposing footballers. And it’s almost ten times more outrageous to public morals and decency than the mass chanting of racist jibes. There’s something far wrong with that particular sense of perspective. It’s almost comical, but hardly anyone is laughing.

The bemused fan of Leeds United (and, for all we know, this applies equally to players, staff and directors too) is left scratching his or her head at the outlandish disparity between the penalty for what is basically a non-offence, and the much less potent sanctions applied in the case of far more disgusting, violent and bigoted behaviour. There is a sense that the slavering pack of press and opposing fans that were on Leeds United’s case had to be mollified somehow, and that most of this lynch mob wanted a points deduction for United. Faced with this, and armed only with a vague and flimsy “utmost good faith” principle, did the League feel constrained to lay it on thick, in order that those thirsting for Leeds’ blood should not be too disappointed? How much would they rather have applied a points deduction of, say, 15 points – to end up looking draconian instead of plain stupid?

Other questions arise. What of Swansea City, who basically hid behind the sofa on transfer deadline evening, refusing to answer calls as their player waited at Elland Road for his transfer to be confirmed? Is that “utmost good faith”? What of Liverpool, who cleared one penalty area of snow at half time, but not the other, in order to maximise their second half advantage? Where’s the good faith there?

Most tellingly of all, what if the club involved in Spygate had not been Leeds United, but some hand-to-mouth, impoverished League Two club without two ha’pennies to rub together? Would they have been hit to the tune of two hundred grand, ushering the receivers in through the stadium doors? Deep down, we know it wouldn’t happen – because this hypothetical League Two poorhouse club would not have the initials LUFC.

The Football League, in levying such a ridiculously high fine, has abandoned any pretensions to proportionality or a real life view. They’ve blatantly – to quote the excellent Phil Hay of the Yorkshire Evening Post – taken a hammer to crack a walnut. Some Leeds fans are now seeking to crowdfund a contribution to the vast sum Leeds will have to pay, but that’s not really the point. Because, although it may well be that Leeds United feel the pragmatic thing to do is take this penalty flush on the chin and move on, that doesn’t make it right. The Football League has, yet again, exposed itself to ridicule and derision, something that has implications for every club under its jurisdiction.

Whichever way you look at this bizarre conclusion to Spygate, it smacks more of appeasing the mob than it does of any maturely considered conclusion. And whatever word you might use to sum the whole mess up, it most certainly wouldn’t be justice.