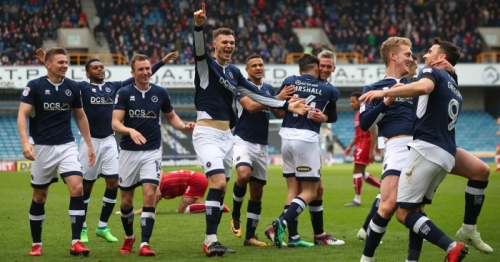 Ah, Millwall. Those loveable, cuddly Lions, late of Cold Blow Lane and now is their own custom-built, state of the art Meccano stadium in leafy Bermondsey, where even the rottweilers go around in pairs for mutual protection against the feral locals. But I love ’em really. Any Leeds fan does, deep down. Or, at least, that’s how we’ll all feel come late Saturday afternoon, if the ‘Wall have managed to get a positive result against the Blunts at Bramall Lane.

Not that Millwall will fancy doing Leeds United any favours, not after the recent tetchy game at Elland Road when a Pablo-powered United came from behind twice to take three points late on. But it won’t be for the love of Leeds that Millwall will be battling against the Blunts, they have their own interests to look after in terms of retaining Championship status. And if it were to turn out that Millwall FC are still a second tier club next season, due in some measure to three points gained at Bramall Lane, then I and many others of an Elland Road affiliation will be saying “the best of British to Millwall and congratulations on your Championship survival”.

It’s in the dog-eat-dog nature of League football that bizarre situations like Leeds fans cheering on Millwall can arise. Whatever the result at Bramall Lane tomorrow, you can take it to the bank that Blunts fans will be cheering on their own despised local rivals, Sheffield Wednesday, as they face Leeds at Elland Road later in the afternoon. What a surreal day it will be. Leeds roaring on the Lions, then Blunts hollering for the Wendies, those reviled “Piggies” – each home side aching for normally hated rivals to have the best of days. You couldn’t make it up.

Whatever happens in two tension-torn corners of West and South Yorkshire this weekend, you can bet it won’t be decisive – there will be more twists and turns to come, that’s for certain. In the meantime, all I can say with any degree of certainty is: Come on Millwall!!