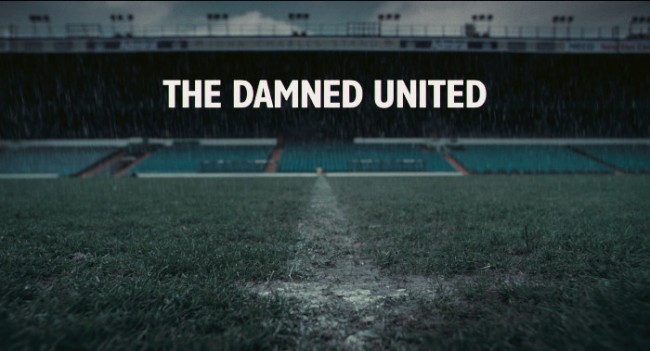 As any avid reader will know, it’s frequently the second or subsequent reading of a book that gives you a real insight into what it’s all about. Equally, giving up on a book part-way through tells you all you need to know about that work. But all too often, you’ll read a book just the once and walk away with an experience that might actually be quite misleading. Such, I suspect, is the case with David Peace’s “The Damned United”.

I read this once, seduced by the subject matter and what sounded a suspiciously extravagant claim to “get inside the head of Brian Clough”. The prose style was – well, let’s say ‘different’. But it survived a one-off read and, give or take some fanciful fictionalising together with a legion of liberties taken with history, it got me through three or four evenings tolerably riveted. And I got a perverse jolt out of the title. The Damned United. That’s us, that is. I guessed there and then that Leeds fans would take it up as a badge of honour. I guarantee that is not what was intended.

Then a short time ago I heard that Peace had written a similar book on Bill Shankly and I read some distinctly lukewarm verging on unimpressed reviews. Intrigued, I asked my wife what she’d thought of the author’s bleak crime series set in West Yorkshire in the seventies, at the time the Ripper was active. She pulled a face that spoke a thousand words. So, I decided to revisit “The Damned United”.

Many will be familiar with the storyline. Some from this book, others less helpfully from the lamentable film of the same name. Then there are those lucky few who actually lived through the events described, or who are students of Leeds United history; they will be the best informed of all.

Whatever the rights and wrongs of the narrative, whatever injustices were done to the likes of Johnny Giles, Don Revie and Clough himself, whatever the departures from historical accuracy – it is the style, for want of a more appropriate word, that I want to address here. So let’s see if we have any more success in getting inside the head of David Peace than the author enjoyed in his attempt to read the character of Brian Clough. As a task, it should be a lot less complex.

Into the office, sit at the desk, boot the computer.

I write down some random sentences. Pick them up later, use them where I can. Use them again and again. It’ll do.

That’ll do, I can use that. I just need to get inside Cloughie’s head now.

But Cloughie’s dead. He’s not speaking to me. Not here. Not today.

I have a break. Clear my head, make room for Cloughie, if he decides to talk. Out into the garden, breathe some clean air. Then it’s back to it. Back to the project. Back to that damned United, waiting for Cloughie, though Cloughie is dead. Back to it.

I can do this. I’m David Peace. David bloody Peace. Author. Huddersfield Town fan. Hate Leeds United, hate, hate, hate. Hate them for what they were, for what they are. Cloughie is the same as me, like that. But Cloughie is dead. And now he’s gone out of my head for the day. But there’s always another day. Always. Always one more bloody day.

Into the office, sit at the desk, boot the computer. No ideas. No Clough speaking to me. Not here. Not today….

And so it goes on, that style. In parodying it, I actually cut down on the repetition, minimised the number of stock phrases, decimated the profanity count. But it gives some idea, I feel, of David Peace’s formulaic approach to establishing his own “style”. There, that troublesome word again, “style”. Some authors have an inimitable style because it’s genuinely unique to them, it can’t effectively be reproduced by other writers. Some authors’ styles should be inimitable because nobody would really want to imitate them – except in parody. Mr Peace falls into the latter camp.

On first reading, it’s something you can live with and the narrative bumbles along, reinforced, it seems, by the constant repetition, the continual use of pre-packaged standard buzz-phrases.  It’s meant to convey the turmoil inside Clough’s head, the way he continually questions, cajoles, reassures himself. At first glance it appears to do that. But on revisiting this book, I found myself irritated by the repetition, wearied by the recurrence of the buzz-phrases, disillusioned with it all.

In “The Emperor’s New Clothes” everyone marvels at the Head Honcho’s wonderful new invisible costume, right up until the little boy, unhindered by years of training in subservience and hypocrisy, calls out “But that man’s bare naked!” – and the illusion is shattered. One re-reading of “The Damned United” was enough to shatter the illusion created by my first reading, and I know now what David Peace is all about.

I’d be interested to learn how long the book would be without all the padding. Not exactly of epic length, I suspect. If you were also to subtract the ubiquitous profanity in Clough’s speech – in real life he was not, apparently, a profane man – then Peace’s Meisterwerk would be shorter still. Honest, Brian – it’d be none the worse for that.