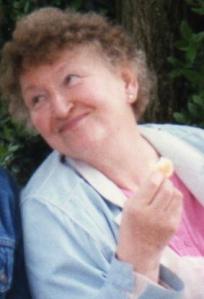 Lesley Atkinson (née Cawthorne) was born in Owlsmoor, Berkshire in November 1936. The second daughter of an Army family – her Dad was a Regimental Sergeant-Major – she grew up with her elder sister Pat and younger brother Terry in a variety of scattered locations across the South of England, Wales, Germany, and eventually, Yorkshire.

Here she married Kenneth, and settled down to raise a family of three fine lads (the eldest being a particularly outstanding young man), and to pursue successive careers in nursing and teaching.

Her mother, Winifred, was my favourite grandparent, a grand old lady who smoked like a chimney and told me amazing stories of her days in service.  ”When Winifred Died”, to be found elsewhere on this blog along with Mum’s original poem of the same name, tells the story of the day Nan passed away.

Lesley has written a book, “Bedpans, Bunions and Bromide” about her time as a student nurse, and has seen this published.  She has also enjoyed a lengthy career on the local theatre circuit, playing such parts as Dolly in “Hello Dolly!” and Nancy in “Oliver!”.  She went on successfully to direct several shows, and I’m glad to say that she has passed on her love of the theatre to all three of her sons. 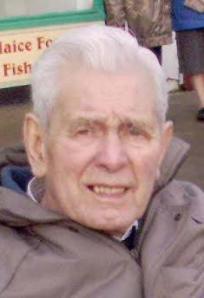 Ken Atkinson was born in Pontefract, West Riding of Yorkshire, in July 1927.  He has lived there all his life. His career encompassed several distinct phases; Bank teller, National Serviceman (Served in the Middle-East; Palestine, Suez etc), Teacher and – labour of love, this – gardener in the exquisite back garden at No.49.

Ken met Lesley, my Mum, in the fifties and they were immediately happy together and deeply in love. Then they got married, and have fought like cat and dog for over half a century since (only kidding!)

Lesley and Ken had a family of three boys, getting it right first time but still adding two spares, and they have also added various cats over the years.

Dad is the man I blame for infecting me with my love of Leeds United, but he was also a dab hand at wine-making, milk jelly, chocolate-covered coconut (better than a Bounty Bar), DIY skills par excellence, including bespoke teenage bedroom furniture, Christmas trifles and many other such indispensable talents, so the balance is to his credit.  Just.

Kate Atkinson was born in July 1993 in Wakefield, and now lives in York where she is

Since leaving St Wilfrid’s, Kate has spent part of a gap year working abroad – in Dublin – so gaining valuable experience of living independently  away from friends and family.  Closer to home, she gained employment locally in a digital processing outlet, before commencing her University course last September.

Hilary Robinson was born in Devon and brought up in Nigeria and England. Part of her education was at Hemsworth High School, where I was lucky enough to be her fellow student in 6th Form English and French.  She is the author of over forty books for young children of which her latest, The Copper Tree is the first in a series of accessible picturebooks that tackle challenging social issues as they affect children such as bereavement, prejudice and adoption. She is also a freelance network and regional radio producer for the BBC having produced Aled Jones with Good Morning Sunday for Radio 2 as well as specialist documentaries for the network. Hilary is also a regular feature writer for regional and national publications.

You can find out more about Hilary here