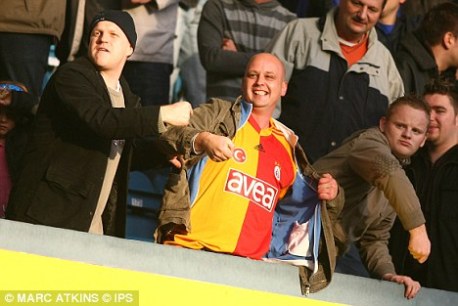 It was a pretty normal day yesterday at the New Den, home of the world famous heroes of sub-primates everywhere, Millwall Football Club.  Nothing out of the ordinary.  The usual crushing home defeat for the toothless Lions as they sit glumly at the bottom of the league.  The usual anthropological posturing from the pseudo-hardmen in the stands as they pelted a Derby County player with missiles while the stewards stood by and watched. The usual lone moron invading the pitch, taking a swing at Derby manager Nigel Clough and then running away, his comical waddle across the pitch and into the stand opposite unhindered by any pursuit.  All of this IS fairly usual for that blot on the football landscape Millwall FC.  But that’s not to say it’s tolerable in the civilised world outside of Bermondsey.

The fact of the matter is, it’s time something serious was done about Millwall.  Like their fans’ heroes abroad, Turkey’s Galatasaray, they seem to get away with behaviour year after year that would see certain other clubs castigated in the press, questions asked in the House, the supporters as a body branded as “vile animals” by some over-sensitive soul in Sheffield 6.  None of this happens to those cheeky rapscallions of Millwall, as they carry on blithely dispensing their own particular brand of hatred and violence – and the authorities turn a blind eye, cock a deaf ear, remain dumb in every sense of that word.

In a couple of weeks, Millwall will “welcome” Leeds United, its players, staff and fans, to the dubious delights of their Meccano-designed stadium.  As is usual every time these clubs have met since the murder of two Leeds fans in Istanbul, certain of the Millwall bright lads will seek to glory in that slaughter, posturing from a safe distance in their proudly-worn Galatasaray shirts, making throat-slitting gestures with the sincere intent of provoking as much anger, misery and disgust as they can.  To call these intellectual voids “apes” is really an insult to lower primates everywhere – waste of DNA is a more accurate term to use.  Their forthcoming exhibition of mind-numbing idiocy is as predictable as yesterday’s humbling at the hands of away-day specialists Derby County was.  These cretins are not the type to let their team’s woeful inadequacy prevent them from enjoying the day out at Millwall in their own, perverted fashion.

If anyone should feel that this is pretty rich coming from a Leeds fan – well, I’d say to you, go and listen to David Jones, he’ll sing a song more to your liking.  In the interests of strict fairness though, it should be pointed out that when our own idiot, Aaron Cawley, attacked the Wednesday keeper at Hillsborough, he was roundly condemned by the vast majority of Leeds fans, who assisted the authorities in locating the silly little boy concerned. David Jones, in branding the support “vile animals” – all of them, every single one, he emphasised – seemed much more concerned by chants directed at himself than for his traumatised goalkeeper.  Such is the precious ego of Jones.  But that shouldn’t hide the fact that the Leeds situation was about an individual, whereas when Millwall fans get going, it’s en masse – as far as their dwindling crowds permit.

The behaviour of the New Den home fans in a fortnight when Leeds are in town will be monitored and noted.  It will be a massive surprise if they fail to crow and gloat over the blood spilled in Turkey all those years ago, but it would be a very welcome surprise. Chickens will not be counted, breath will not be held.  I fully expect the Millwall boneheads to disgrace themselves and their club again, such disgrace being measured by accepted standards in football as a whole.  The standards that apply in this particular part of London, on the other hand, appear to be a good century or so behind the times.

If the Millwall fans do manage at the Leeds match to show themselves up, yet again, for the tasteless jokes that they are, and this only a fortnight after yesterday’s appalling display of violence and anarchy, then it’s time the complacent authorities actually got off their lazy backsides and did something.  If that something amounted to a final warning before the expulsion of Millwall from football upon the next repetition of such behaviour, then so be it.  Football as a whole would be a better place, a more acceptable environment, without Millwall FC.