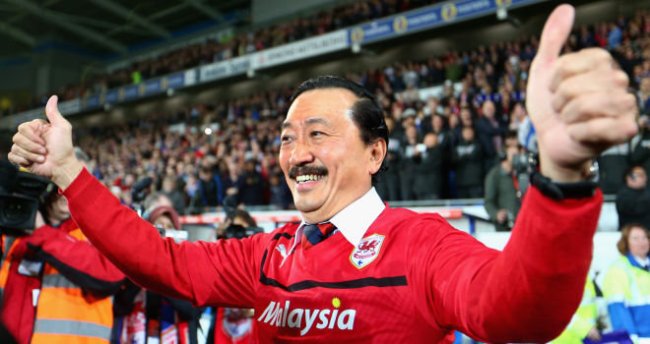 The time is fast approaching when the people who know what the game in this country is all about, are going to have to stand up and be counted.  I mean, of course, the fans – and I write in the full awareness that too much standing up can lead to you being evicted from some of the more authoritarian clubs in the various leagues.  But this type of standing up would be symbolic.  It would send out a signal that we, the fans, have had enough of clueless owners and chairmen manking about with our game.

In the last week or so, it’s been carnage in the Premier League alone.  Steve Clarke of West Bromwich Albion has been sacked, a decision that makes lighting that extra boiler to get a few more leagues of speed out of the “Titanic” seem like a model of sober judgement.  Andre Villas-Boas has gone too, a victim of his club’s failure to hang on to their star performer from last season, Gareth Bale.  Anyone who saw the look on the face of Danial Levy during Spurs’ 5-0 demolition by Liverpool would not have given much for AVB’s chances of avoiding the pre-Christmas axe.  Meanwhile, up in Hull, battle-scarred old warhorse Steve Bruce is having to hide behind a sickly grin and pretend that it’s OK that Hull’s megalomanic owner, Assem Allam, is planning to trample all over the finer feelings of City’s support by forcing through a name change to Hull Tigers whilst inviting those who vociferously object to “die as soon as they like”. Tigers, Tigers, rah, rah, rah!

And now we have the news that Cardiff City’s clueless owner Vincent Tan has told his successful manager Malky Mackay – a hero to the Cardiff fans, and rightly so – to either resign, or be sacked.  Presumably Mr Tan feels that Mackay has been interfering too much in team affairs, and not listening to the vast wisdom of one V. Tan Esquire.  Who does this jumped-up little pro think he is, after all? Doesn’t he know whose toy Cardiff City is??

In truth, it’s beyond a joke already.  Good, honest pros are at the mercy of clueless amateurs whose only qualifications to be where they are in the football hierarchy are a stuffed wallet and a fool’s ego.  It’s way past time that somebody, somewhere, got a few people of common sense and influence together – or failing that, the likes of Bobby Charlton and Trevor Brooking would do – and set to discussing an alternative model for the game in England – before these spoiled, rich-kid charlatans ruin it beyond repair.

You wouldn’t have to look far to find that alternative model.  Go East, young man – cast your eye and focus your thoughts across the North Sea and look how things are run in the Bundesliga of good old Deutschland. Wonderful stadia with safe standing, reasonable ticket prices, a fantastic league nurturing a successful national team – and the fans involved at every level, helping make the decisions that ultimately affect them, for the good of all – not just some bloated plutocrat with a brain full of damp rot and the arrogant belief that wealth justifies autocracy.

Football in this country has a long history of being in thrall to a clutch of well-to-do local businessmen, but at least there was a hint of democracy in the old-style board of directors.  Now it’s CEO’s here and Directors of Football there, and all frantically knuckling their brows to whichever barmy billionaire sits on top of the whole creaky edifice.  They say with power comes responsibility, but not in English football.  No, sir.  These people delegate the responsibility whilst hanging on to the power.  They hire and they fire and then they do it all over again.  As the process goes on, so the credibility of the game diminishes – what’s the reaction of the fan in the street when he hears that an excellent coach like Steve Clarke has been sacked before the season is half-over?  Why, they laugh derisively, clearly unaware of the respect due to some stockbroker and investment banker who happens to own most of West Brom – despite being unburdened by any knowledge of the game.

Sadly, it looks nigh-on impossible to transform our game into anything resembling its efficiently-successful German counterpart.  Too many vested interests, too much money involved – and far too many tender, fat, sleek egos which demand to be stroked and adored whilst being party to amateurish decisions that would shame a Tory minister.  So it looks as though we’ll have to put up with what we’re reluctantly witnessing happen – and resign ourselves to the game here become ever more like the franchise system of American Football.  Yay.

When’s the next home Ashes series, anyone?