Celtic, Rangers and The Old Firm: the Enlightenment of a Leeds Fan – by Rob Atkinson 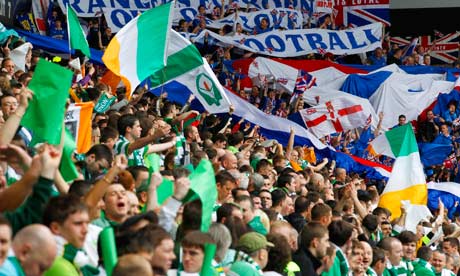 Following on from yesterday’s Old Firm piece which was provoked by an advert placed by Celtic fans in the Scottish Sunday Herald, I find myself one day on having taken quite a lot on board. I’m somewhat bewildered by the strength of feeling on both sides of the argument, considerably better informed as to the legal position insofar as it defines the status and existence of Glasgow Rangers FC – and not one whit persuaded away from my original position that trying to wish or argue a rival football club out of existence is just plain wrong.

I’ve been accused of many things by those outraged over yesterday’s piece. Some of these people have been Leeds fans – the very last people I would expect to support the idea of football fans wishing the worst that can happen to rivals – to lose their very history. One Leeds guy asked me why I was speaking up for the Rangers end of things “as Leeds have far more links with Celtic”. It’s difficult to know whether to take people seriously at times. Am I really to be guided by the irrelevant fact of which clubs are closest or more nearly linked to my own team?

I should say yet again that I am not a Rangers fan. I’ve never really been able to decide who to back in Old Firm games, but I’ve always watched them for the sheer spectacle. So I’ve tended to hope that whichever team seems currently to be playing the better and more attractive should prevail. I’ve generally enjoyed the blood and thunder of these fixtures. From now on, though, I’ll probably be hoping (vainly, I’m sure, on Sunday) for Rangers success whenever these two meet. I’ve just been so shocked and horrified by the sheer spite and malicious venom displayed by the majority of Celtic fans who responded.

The thing is, I know what it is truly to hate another football club. I find it hard to describe the depths of my loathing for Manchester United. I despise them and all they stand for – I feel they’ve been instrumental in bending our game completely out of shape this past two decades. But wish them out of existence? No, not at all. I want that rivalry, I want them there so that I can carry on hating them. I’ve published articles decrying their debatable achievements since Murdoch bought the game and skewed it in their favour – but I wouldn’t want to be without them. They’re the gift that keeps on giving for someone who relishes a bit of sporting hatred.

So the attitude of so many Celtic fans simply baffles me, as well as leaving me a bit cold. I can’t relate to such dog-in-the-manger lack of empathy with fellow fans, it is alien to me – and I hope to most proper fans of the game. I’m also persuaded by a lot of what I’ve read in an extensive comments thread that not only do Rangers have a tradition and history case for claiming to have survived as a club – this appears to be the legal position too – despite the wishful thinking clung to, against all logic and precedent, by so many Celtic fans.

I hope the Old Firm game tomorrow is a good one. I expect Celtic to win – and it will be interesting to see the fans’ reaction when they score, against what they are claiming is a new club with no history and no tradition of rivalry with the Celts. And yet I’m willing to bet there’s not a ticket to be had with a sold-out Celtic allocation – and that they’ll celebrate with joyful abandon any goals scored against a team they now deny makes up the Old Firm of glorious tradition.

Hypocrisy, a lack of feeling for the game and what it means to be a fan – and rank, vicious hatred not just for Rangers FC, but for their history and the fact that they have out-performed Celtic over the century-plus of the Scottish League. That sums up what I’ve gleaned of the green and white psyche this past twelve hours or so. It’s not something I’d have thought anyone could be proud of – whereas everything I’ve heard from Rangers fans has rung with pride and passion – despite their long fall and slow climb back.

Enjoy the match tomorrow, may the best team win. And may we have many more Old Firm games in the future.

105 responses to “Celtic, Rangers and The Old Firm: the Enlightenment of a Leeds Fan – by Rob Atkinson”