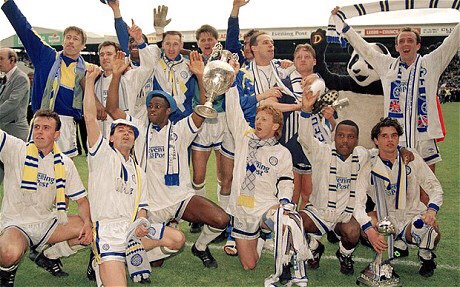 The Premier League season, which has been simmering away for the past eight months or so, is now coming nicely to the boil – and it looks set fair to produce quite the most appetising and satisfying feast of the Murdoch era so far. Not for over twenty years have we seen such unlikely and thrilling Title winners as Leicester City would be. Back in 1995, Blackburn narrowly won the crown of Champions, just pipping Manchester United. But they did it by out-spending the big spenders – and it was their third year back in the big time. Leicester are threatening to be top dogs on a budget – and in only their second season at the top table.

Many pundits are going back years before Blackburn’s success in an effort to find a precedent for what the Foxes seem likely to achieve in this momentous campaign. As far back as 1978, the Nottingham Forest of Clough and Taylor won the old Division One title in their first season after promotion. Forest took the league by storm, with a thrilling brand of football based on neat passing, hard work, collective responsibility and a pulsating team ethic. The parallels with this Leicester side are easily drawn – but again the timescale was different for Forest, as was the whole vista of English football compared to the moneybags Premier League of today.

The closest resemblance to the scenario now panning out for Leicester was the very last Football League Championship campaign in 1991/92, when Leeds United took the title in their second season after promotion, precisely the situation that Claudio Ranieri’s men are now attempting to bring to fruition. Leeds had gained promotion in 1990, and had finished a respectable 4th in their first elite season. Leicester, on the other hand, struggled badly first season up, and were bottom of the Premier League exactly a year ago. But they performed spectacularly to avoid the drop, and they have carried that form over into what appears more and more likely to be their debut season as English Champions.

The similarities between Leeds of 1992 and the modern day Leicester are persuasive. Leeds relied on a fast-paced approach, closing down the opposition to win the ball back quickly, creating mayhem with a strong and talented midfield and reaping the rewards of some lethal strikers up front. Most of Leeds’ strength 24 years ago was in their midfield, where Strachan, MacAllister, Batty and Speed were a potent engine room. In Leicester’s case, Vardy up front has been a revelation, and not only for his goals. This is a player who has shone in Leicester’s hard-working team plan, running the channels tirelessly, never giving defenders any peace, always pulling them around and disrupting many a rearguard for the benefit of his team-mates – and to show off his own clinical finishing.

Both Leeds and Leicester were unfancied for title success (Leicester were 5000-1 against at the start of this season) – both faced main rivals of historical pedigree who had yet failed to win the top prize for far too long. In Leicester’s case, they are looking to deny Spurs, a club with no titles to its name since 1961, the same year Don Revie began his masterful process of creating a Super Leeds machine. Spurs have won a few cups since then, but have never threatened to top the poll. Now, just as they seem better equipped than for decades past to do just that, they could be fated to fail again, as a nerveless Leicester side simply keep on grinding out the results that are inching them towards the ultimate success. Leeds performed similarly in 1992, appearing destined to lose out to a Man U side looking for their first title in 25 years. But Leeds hung in there, waited for the weaknesses of their rivals to show – and then mercilessly exploited the situation to emerge winners by four clear points.

As a Leeds United fan with vivid memories of that last old-style title campaign, I can easily understand the feelings of all connected to Leicester City right now. I remember turning up for games towards the sharp end of that season with nerves stretched taut, utterly unable to enjoy myself until the points were won. And I remember being glued to the radio, waiting and hoping for news of a slip-up for the boys in red. It was exhausting, exhilarating, devastating and miserable by turns; for every upturn on that roller-coaster of a run-in, there was a downturn that had you tearing your hair out. When I watch the Leicester games now, all of them under the microscopic gaze of the Sky cameras, I see the close up shots of fans suffering those same agonies and exulting just as we did when things go well. The animated faces are the faces I remember from almost a quarter of a century ago; the despair is the same, as is the delight.

Whether the outcome will be the same remains in the lap of the Gods – or, at least, the Spurs. But I wish Leicester well, as they try to finish off the job I can so well remember my heroes in White doing all those years back. It would be wonderful for the game if Leicester could do it – just as I understandably feel it was brilliant for English football that Leeds United were the last old-style champions. Not many agreed with me back then; we celebrated riotously, but in a vacuum of indifference and resentment. Then again, Leeds never were everybody’s cup of tea. And that’s one major difference with Leicester. The whole country outside of North London is rooting for them to secure the first League title in their 132-year history.

“Doing a Leeds” has negative connotations, more to do with a precipitous fall from grace and financial collapse than any sporting success. So, if Leicester can close out this season as Champions, perhaps we can rightly say that they’ve “done a Leeds” in a good way – as no club has really managed since those dear, daft days of the early nineties. If anything, Leicester’s achievement would be even greater, a marvellous, unprecedented thumbing of a poor man’s nose at all the sleek moneybags types they’ve left struggling in their wake.

All the very best to the Foxes, who could conceivably find themselves a whopping ten points clear with only 5 games to play after this weekend. We’ll look forward to raising a celebratory glass to you, when you can finally call yourselves Champions.