Will Marcus Antonsson, Leeds’ New Scandinavian, Be a Bakke? Or a Brolin?   –   by Rob Atkinson

Scandinavia is quite a productive marketplace for players of reasonable quality at competitive prices and, as such, it is a market that Leeds United has dipped into from time to time, usually with a fair degree of success. The Yorkshire Evening Post has marked the occasion of United’s acquisition of their latest “Skandy” import, Marcus Antonsson, by running a poll to see which of seven predecessors should be regarded as best value. Eirik Bakke is looking a strong favourite at the moment, with the prematurely tubby Tomas Brolin predictably trailing in a poor seventh and last place.

In between those two extremes are several others of whom Leeds fans will have more or less fond memories. Alf Inge Haaland, by common consent, served United well in the three years leading up to the Millennium. He was an effective midfielder with a knack for popping up with useful goals here and there – and he seemed to “get” Leeds United in a way that certain players do, establishing thereby a distinct rapport with the Elland Road crowd. His role in the self-inflicted injury of Roy Keane, who comically did a cruciate in a vain attempt to foul Alf, is still talked of today in tones of distinct approval. The only real blot on Alfi’s copybook was a belter of a goal he scored at the Gelderd End – sadly, for Man City on his first return after leaving United.

Among others, Kasper Schmeichel did OK in goal for Leeds, managing to some extent to live down the unfortunate fact of his parentage. Leeds fans still ask why, oh why was he transferred – but Kasper’s determination to run his United contract down made selling him for a million a real no-brainer. Gunnar Halle is fondly remembered for his attitude and commitment, and Casper Sloth is still awaiting the verdict of a jury that has been out for virtually his whole time at Leeds so far.

The Tomas Brolin era at Elland Road started with high expectations – but it was all downhill from there. With his one real bright spot being a fine performance in a Christmas Eve 3-1 tonking of manchester united, when he set up the killer goal for Brian Deane, some remember him even better for a comedy moment at Selhirst Park. Playing for Crystal Palace against United, he sustained a head injury and had to go off to be bandaged. During his absence, Leeds scored and Brolin copped some good-humoured but intense stick when he reappeared, his head swathed in about half a mile of white medical dressing, like some sort of fabric motorcycle helmet. Sadly for the unfortunate Tomas, this head-dress almost literally exploded when the ball struck him fair and square in the skull, leading to a peak of hilarity among the away support. He may not have been revered at Elland Road, but for that comedy moment as well as his part in the humbling of the Pride of Devon, he is unlikely to be soon forgotten. 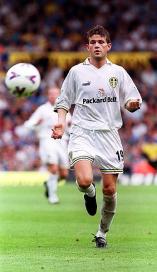 So, we welcome our latest Scandinavian recruit – and we must simply hope that he turns out to be more Bakke than Brolin. The advance publicity is promising, with the additional plus point that this appears to be a Garry Monk signing, not another of Cellino’s cock-ups. Antonsson was in demand elsewhere and has an impressive recent CV, after a prolific spell of late. All Leeds fans will wish him well, with the earnest hope that he will be followed into the LS11 area by other signings of equal or even greater quality.

Welcome Marcus – you’ve joined what is still a great club. All the best in helping restore us to our rightful elite position in the game.

2 responses to “Will Marcus Antonsson, Leeds’ New Scandinavian, Be a Bakke? Or a Brolin?   –   by Rob Atkinson”