Life, Leeds United, the Universe & Everything – 1000 not out

In December of 2012, I wrote an article about the lack of passion and commitment in the England football team, to launch the blog I’d called Life, Leeds United, the Universe & Everything. Leeds United were in one of their too-frequent glory-free periods, becalmed in the Championship. Corruption seeped its way through the corridors of power, whether you looked at the rulers of our national game or indeed the nation itself. Millions gazed dead-eyed and compliant at the telly box in the corner, placated by reality TV and the glitz of the Premier League. Six years on, as I clock up article number 1000, it’s self-evident that not much has changed – so there’s been plenty to write about, and ample justification for the odd body-swerve away from our heroes in white.

For the blog itself, though, Life – if not Leeds United and the Universe, never mind Everything – has been quite good. Halfway into its first full year, NewsNow syndication was granted, and my little creation went global – thanks mainly to the happy fact that there are Leeds United fans, in big numbers, simply everywhere throughout the world. Since that time, blog hits have averaged thousands instead of the initial readership of dozens – and now, with this piece, the first “millennium” has been clocked up. Other writing commitments have meant that the frequency of posting is not what it was in the early days, but still, in those thousand articles over six years, almost three million hits have been registered from a shade under two million visitors. Those are numbers I couldn’t have dreamed of as I wrote that first piece, and I’m duly grateful to everyone who’s ever clicked on the blog, made a comment, shared an article, made a donation, or whatever. You’ve all contributed to what I would modestly describe as a fairly successful project. And happily, the blog has led to other things for your humble correspondent – columns in two local newspapers, invitations with hospitality to cover various sporting events – and even admission within the hallowed portal of the Leeds United press box. Despite the occasional grumblings of the mob, perhaps I am actually doing something right.

Still, not everyone has always been happy, needless to say, about everything I’ve written here. As Abraham Lincoln said – and as he had violently confirmed to him by actor-turned-assassin John Wilkes Booth – you cannot please all of the people, all of the time. And, to be fair, I’ve never set out solely to win friends or admirers; I’ve always wanted to be opinionated and partial, being a Leeds fan is a passionate, partisan thing – and you have to speak your mind. I’ve frequently disagreed with fellow supporters and writing colleagues, and with the club itself, as well as with the more obvious groups like rival sets of fans. I’ve made myself deeply unpopular with certain of these groups, and I’ve attracted the usual inarticulate abuse, death threats and more or less sinister promises of harm to my family – mostly anonymous, as you’d expect. But it’s all been worthwhile in terms of getting deeply-held points of view off my chest, and it’s on all fours with my need as a writer of opinion pieces to be more than just a mere cypher, toeing a line drawn by external bodies. I’ve always tried to draw my own line, and this has frequently upset people – but those are the breaks. You have to stand by your own ideals.

So that’s been the rationale behind the first thousand posts on this blog. Apart from the very occasional guest post, it’s all been my own work, and I’d imagine that this will hold true for the next thousand too, however long that might take. I’m happier paddling my own canoe and sticking to my own guns – though I am looking for a site sponsor, so I’m happy to talk to interested parties about that! But the blog, as I hope and trust, will continue to go from strength to strength, particularly as and when Leeds United gets its act together and ascends to the Promised Land of the Premier League. Then, it will be a whole new ball game, both for me and for the club I’ve loved (though not uncritically) for the best part of half a century. Roll on, that glorious day.

In the meantime, thanks to everyone, friend or foe, who has ever given up a few minutes to read this blog. Your time and patience is much appreciated. Thanks also to my little group of trolls, who have afforded me so much amusement without ever seeing the light of day on the comments page. I’m thinking here of people like “Clive”, who imagines he’s had me banned on a few occasions from NewsNow, and is always surprised to see that I’m still there. Thanks go to Clive, and the others too. You need a bit of a laugh sometimes when you’re writing and thinking about the soap opera down at Elland Road, and my trolls, as much as any other group, have been as devoted and amusing as I could possibly wish.

So, it’s onward and upwards from here. Expect post number 1001 whenever there’s anything that needs saying about our beloved Leeds United – or maybe about Life, the Universe, Everything. Please keep reading and commentating and – to those kind, blessed few – donating. It’s a sobering thought that, if every single one of the views over this thousand posts had realised just 20 pence, I’d now be over half a million quid better off. Life’s not like that sadly, but my kind donors still keep the blog going and I’m immensely grateful to them for their generosity. Here we go with Leeds United – Marching On Together. 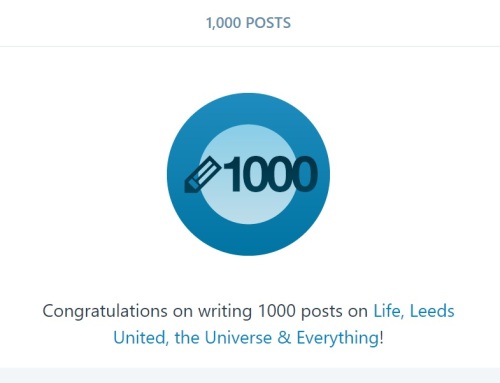 Here’s to the next thousand #LLUUE

Leeds United are talking the talk, so it is reported, ahead of what could and should be a busy summer transfer window. The question now, assuming that we believe some of the tempting names being bandied about, is: can they actually walk the walk, delivering signings that will radically reshape the squad ahead of yet another season outside the top flight?

On the pessimistic side of this debate, it has to be said that, after the past several years, we’re getting used to “having our expectations managed” (some would call this “being lied to”). Time and again, transfer windows have opened to the accompaniment of earnest declarations of intent and ambition – only to slam shut again with promises unfulfilled and the squad either not noticeably stronger, or sometimes actually weakened. It’s annoying and frustrating – but maybe, just maybe, that won’t happen this time. So far, after all, under the stewardship of Andrea Radrizzani, more actual money has been spent on transfer incomings than for many a season past – though much, if not all of this could be said to have been funded by high-profile departures like Chris Wood. You might even argue that our cash has been flashed, not wisely, but too well – yet the real problem for United has been the stifling effect of the club’s wage structure, effectively ruling out many of the better performers, who sordidly insist on going to clubs where they’ll get more money.

So, looking on the optimistic side now, it’s mildly encouraging at least to hear whispers that the upper wage limit might just be less parsimonious this time around. That, if true, would provide a whole new dimension of possibilities for United’s recruitment process, in that we’d be able to attract a better quality of player – in theory, anyway. Some of the names mooted would seem to suggest that such a loosening of the salary purse-strings may indeed be under consideration. Both Abel Hernández of Hull City, and Birmingham ‘keeper David Stockdale currently command salaries that would have put them out of United’s reach in previous windows. But now, both are being talked about as serious prospects, with respected Yorkshire Evening Post reporter Phil Hay being quite clear that there is some substance behind the Hernández story. This surely indicates that a change of policy in terms of wages could indeed be possible.

By common consent, the Leeds squad needs significant surgery this summer, with some drastic snipping needed as well as some high quality grafting. Getting rid of what has been judged unhealthy excess flab in the squad may be a task in itself, with some unwisely lengthy contracts having been lavishly handed out during last summer’s mainly bargain basement splurge. And, clearly, the desperate need for quality in several areas of the park will not be met on the cheap. Or, at least, we’ll have to hope that the powers that be are not daft enough to suppose that it can.

On the face of it, the recruitment of Hernández and Stockdale would represent a hell of a good start, with perhaps the return of Kyle Bartley and a new deal for our tyro left-back Tom Pearce, a player who made such an impact towards the end of the season just gone, into the bargain. There are other noteworthy names in the mix, some of whom might appear more likely than others. But, overall, if only half of the possibilities being spoken of actually came to fruition, with a bit of dead wood clearance too, the Leeds squad would have a distinctly leaner and fitter look about it come August, and quite possibly a more generous smattering of quality. And that would be nice.

Always assuming, of course, that we’re not being toyed with yet again, having those expectations ruthlessly exploited and then dashed, for the umpteenth time. But, surely – they must know they can’t get away with that again, not and keep the 30,000 crowds coming, anyway. They really must know that – mustn’t they?