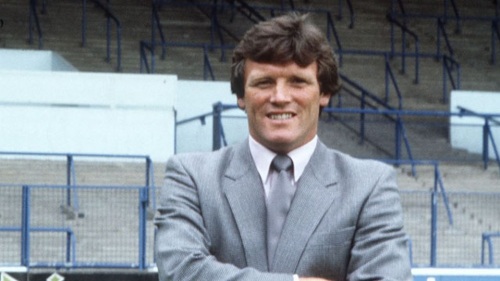 A dapper Eddie pictured in front of a dapper, all-standing Kop

It’s “Legends Birthday Time” again, and today we almost belatedly celebrate the 72nd anniversary of the birth of Sir Edwin “The Last Waltz” Gray, genius winger, loyal Leeds man through and through and thoroughly bloody nice bloke, as Tim Nice-But-Dim might say – only this time, he’d be spot on.  It was Don Revie who once said of Eddie “If that lad hadn’t pulled a muscle, nobody would ever have heard of George Best”. That’s certainly fulsome praise and a hell of a tribute to a lavishly talented player, surely one of the very best ever to pull on a Leeds United shirt.

The memories of Eddie are many, mainly as that gifted player who would torture full-backs with a genial smile on his face, but also as a manager at Leeds, in charge of a precociously gifted set of youngsters who could have gone far with just that little bit of extra investment – sound familiar? Eddie has also served his time as a pundit, commenting on the latter-day performances of his beloved Leeds United, always straining so hard for impartiality and endeavouring to avoid accusations of bias – indeed, some out here sometimes feel he tried a little too hard in this respect.  But I’ve had the honour of meeting the man a few times, and one of these was on the commentary gantry at Elland Road – when he was preoccupied by the need to find me a chair to sit on, much to my bemused delight – so I’m well aware of Eddie’s professionalism as a broadcaster, just as was the case in his days as a player, manager and of course as the coach in those promising early David O’Leary days.

It is as a player that Eddie will best be remembered and revered by Leeds United fans of all ages.  Those who weren’t lucky enough to see him play in person may well have thrilled to video footage of his bravura performance in the 1970 FA Cup Final when, on an absolute pig of a pitch chopped-up by the Horse of the Year Show, he put in one of his greatest and most tantalising displays of sorcery out wide, reducing David Webb to a gibbering shadow of his normally efficient self.  Legend has it that Webb eventually had to be taken off with severe vapours and twisted blood – sadly he was to have his revenge in a replay gifted to Chelsea by the inevitable Sprake big-match cock-up.

Another vivid memory is of Eddie’s bewitching dance through the Burnley defence in a league match at Elland Road, when he took on and beat opponents just as he pleased before drilling a sublime near-post finish past a bewildered Peter Mellor in the Dingles goal.  It is this match that brings out Mr Gray’s slight perverse streak; he scored two that day and he always insists that it’s the other goal – a superbly-judged 35 yard lob at the Gelderd End – which he remembers as his best.  But nobody who has seen the way he destroyed a top class defence with that mazy run, will ever forget it.  It was a bit like the famous Ricky Villa goal for Spurs at Wembley – except much better.

More generally, it’s the characteristic hunched shape of Eddie Gray that you remember – never totally reliant on speed, he would beat his man with pure skill, manifesting itself in a variety of tricks, shuffles, stepovers and other sundry pieces of magic. His long-term thigh injury, sustained as a mere youngster, led him to rely far more on technique than pace and mobility, although he was no laggard either. But such were his sublime skills that he stands as possibly the last great example of the old-fashioned tricky winger, a man who could play an entire top-flight defence as a toreador plays a bull, a player of prodigious style, skill and élan.

Mere words cannot, of course, do justice to Eddie Gray the player or Eddie Gray the man. Leeds United have been privileged by the service and unstinting support of both, and they have not always played fair by him in his various roles at the club.  But Eddie Gray’s place in the Elland Road Hall of Fame is as secure as that of any other Legend in the whole history of the club; he is synonymous with Leeds, which is after all the place he has lived and worked for most of his life since the age of 15 – not that anyone could guess this whilst trying to understand his impenetrably Scottish accent.

It was my pleasure and privilege to watch Eddie Gray weave his magic for Leeds United many times between 1975 and the end of his playing days, by which time he had become a cultured full-back who also managed the team.  His long and illustrious career gives the lie to Brian Clough‘s infamous remark that, had he been a racehorse, he’d have been shot – a jibe at that long-standing injury.  This was surely the most oafish remark that even Clough – a quite legendary oaf – ever made.  Gray, that most mild-mannered of men, took exception – reminding Clough, who was his manager at the time, that his own career was ended by injury and that he should, therefore, know better than to say anything so crass.  I’d have given plenty to see Old Big’ead‘s face when that shot went home.

Eddie Gray – genius, magician, legend – and not least of these attributes, the nicest guy you could wish to meet.  A slightly overdue, just in time Happy Birthday, Eddie, and many, many happy returns.