Starving British children are looking for food in rubbish bins

Starving children reduced to scavenging in bins – in 21st Century Britain, the 6th richest country in the world. For shame, Camoron. Roll on 2015, and let’s get you and your malign cronies OUT.

Who said it could never happen here? Children are starving on the streets of Britain as the Tory-led Coalition’s hate policies bite ever-more-deeply into the poor [Image: Stoke Sentinel]. British children are sifting through bins left outside houses in search of scraps of food because they are starving, it has been revealed.

But Tories and their supporters in rich London won’t have to look at them – because they are in Labour-held Stoke-on-Trent.

The Stoke Sentinel reported that “Youngsters have been searching through bins in the Hollings Street and Brocksford Street area of Fenton before eating any leftovers.”

It said, “Dozens of hungry families are referred to Fenton’s food bank for help every week.”

What’s really sad about this story is that some of the people interviewed seemed to think the problem was with the mess left behind by these children – youngsters who are, remember, so hungry that they…

I’m not normally one to voice my political opinion – this being a matter very close to my heart, I tend to get angry and upset very easily when met with the same meaningless, patronising, verbatim Daily-Mail-headline retorts I’ve been hearing for years. However, it occasionally gets too heated and (usually after bursting into furious tears) I want to add my two pennies’ worth.

This morning, I was listening to the debate on Five Live about Iain Duncan-Smith’s recent claim that he could (and would) live on £54 per week. I listened as Edwina Currie declared this a reasonable amount with which to get by; I listened as Stephen Nolan ‘challenged’ her to put her money where her outspoken mouth is; I listened as they suggested going for it together. What a lot of people heard was a very hesitant deal being made, and then backtracked upon as Tories do so very well. People saying, ‘there’s no way she’ll do that, there’s no way – it’d be too hard…’ I heard, however, a highly condescending offer being made to the poor, dumb masses, by these two very generous and philanthropic rich people.

Here, you little insects! Guess what we’re going to do? We’re going to have a go at living your peculiar little impoverished lifestyles for seven whole days! I mean, we’ll probably still be living in our mansions with our central heating and our cleaners and our freezers full of food, not to mention that we’ll still be perfectly mentally healthy due to our previously untroubled lives… and it is, of course, quite beside the point that we personally would no doubt be able to live on just what we have now, and absolutely nothing extra for a number of years if we were to be so daring, but a week should be fun enough, don’t you think? What larks!

Besides this, though, there’s the fact that these two will return to their respective lifestyles feeling that they’ve had a ‘fun experience’, as Currie referred to it live on the radio, and that they’ve actually made a point or done some good. And still there will be people living on even less than that. People that have no choice, no get-out clause – and yet Currie still stands by her principle that we can only pay ‘what we can afford’ to poor people. Oh, really Edwina? So it’s okay to cut their resources even further – to tighten the noose and see just how much more it’s possible to bleed out of them? Two words: bankers’ bonuses. We can afford those, apparently. And there are the other discrepancies: Currie suggesting that her having to live on less than £54 per week in the 60s being comparable to living on the same now. Nolan not actually giving a damn about the state of living people have to put up with, as long as his show is listened to and his wage delivered at the end of each month. I could bring up everything, and would, if I didn’t know it would get shot down with whines of ‘but Edwina says’, and ‘let’s agree to disagree’.

Just wanted to have a small attempt at fighting against this supercilious effort to pour oil on troubled waters – we’re not falling for it and we will never be on your side.

In the wake of revelations that Local Authorities will be allowed to classify dining rooms as “bedrooms” for the purposes of the so-called “Bedroom Tax”, the Coalition has moved to clarify the position still further.

A Government spokesman who wished to remain anonymous, but who is in fact Iain Ferkin-Scheidt (pictured below) was quoted today as saying: 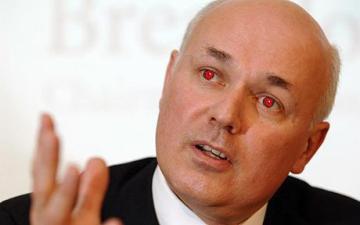 “Social housing tenants need to be clear about this. Any room that can be deemed superfluous to the requirements of a Housing Benefit claimant should be counted as a “bedroom” for these purposes – for example a dining-room, conservatory and so forth. I believe that some of you people still have what they used to call “parlours” – and yes, they can be defined as bedrooms too. This will be a matter for Local Authorities’ discretion, but they will need to justify their decisions to High Command.” Going a little purple around the jowls, Mr Ferkin-Scheidt went on: “We have to be very, very careful about terminology here. This is not a “bedroom tax”, it is a Spare Room Subsidy. The Prime Minister himself, long may he reign, has stated this. We want to make it quite clear that this is a measure aimed at shirkers, not workers. Lame excuses such as disability – if you’ll pardon the pun – simply will not wash; much as is the case with most of the frightful common types we’re aiming at here.”

When asked about the fact that many Housing Benefit claimants are actually workers in low-paid employment, Mr Ferkin-Scheidt remained bullish in his defence of policy. “It’s quite simple,” he explained kindly. “Those people on Housing Benefit cannot expect the rest of us to subsidise luxuries for them such as spare bedrooms and parlours and dining rooms or what-have-you, out of our taxes – particularly as many of us will actually be paying up to £100,000 a year less tax from April. As you can see from that figure alone, the country simply cannot sustain extravagance on this scale.

“Those who have failed to provide for themselves and their families, by obtaining only part-time or low-paid employment will have to accept that they are not deserving of the same privileges as good, honest, hard-working, tax-evading, Tory-voting people who bought their own Council Houses in the 80’s when St Margaret was Queen. We shall be taking further measures to ensure that this distinction is recognised, and to remove the burden of financial responsibility from the over-stretched rich. The fact is that the poor, the disabled and the long-term sick have had it easy for far, far too long now. I am currently studying proposals for what some are already calling a “Hot Tap Tax”, although it is in fact a heated water subsidy. Some of us feel – in all compassion and sincerity – that it is an unconscionable luxury for the Shirking Classes to have hot water on tap, and it may well be that Housing Benefit claimants who live in homes with hot running water, showers, flush toilets and so on and so forth, will at some point in the future be subjected to a further cut of 30% in their Benefit, unless they take up the option of moving to a smaller property, with a stand-pipe, and outdoor privy and a well. We are determined to bring the good old days back to this great country.”

Pressed further on the matter of future proposals along these lines, Mr Ferkin-Scheidt refused to reveal any more concrete details, but promised a fuller statement after the second reading of the new “Workhouses & Treadmills Bill” currently proceeding through the House of Lords.

“This Government is pledged to firm, decisive action,” he confirmed. “Did your great-great-great grandmother have hot running water? No, of course she didn’t, and neither did mine – although she did have staff to carry heated water up eight flights of stairs for her – but that’s to become tied up in detail. There’s fridges, too, and all those nasty wide-screen TV’s. Did Sir Winston’s mother have a fridge? Or a 42” LCD TV? And, look – let’s be totally honest here. Ice can be chipped from a frozen well, and allowed to melt. Cold water can then be heated for all the simpler needs of the sub-strata of society, and a short walk down the street to a shared privy never killed anybody, except a few disease-ridden ne’er-do-wells who were never going to become economically productive units anyway. Hot water and indoor flush toilets are privileges, not rights – and we are determined that the Party of Privilege shall live up to its traditions and ensure that people are once again well aware of their place in life.”