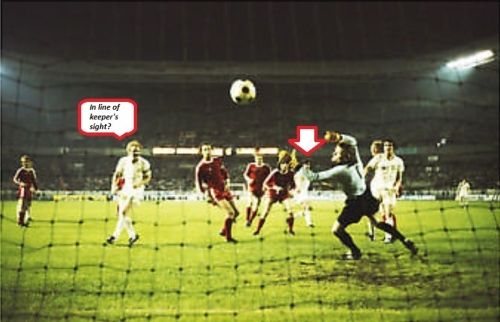 Billy Bremner, clearly not interfering with play as Lorimer lashes the ball past Sepp Maier

We’ve all known it for nigh on 44 years, but here, for anyone who might have had even a shadow of doubt, is the ultimate proof that Leeds United were robbed of their rightful European Cup triumph in Paris way back in 1975. A glance at the photograph above, which captures the moment that the ball flew off the right boot of Peter Lorimer (arrowed), past German international keeper Sepp Maier and into the Bayern Munich net, clearly shows that Billy Bremner, who had been pushed into a marginally offside position, was way out of the line of sight between Maier and Lorimer. So it was impossible that Bremner was interfering with play and, by any interpretation of the laws then or now, the goal should have stood.

The goal was disallowed, of course, only after the insistent intervention of Bayern captain Franz Beckenbauer, a player noted for his habit of pressurising and influencing match officials. Beckenbauer had also been involved in a first half penalty claim for Leeds, scissor tackling Allan Clarke in the Munich area. It was the clearest penalty you could possibly wish to see, the type that even one of today’s Football League referees would have been hard pressed to deny Leeds. There was another penalty claim in that first half too, Beckenbauer involved again when he seemed to handle the ball on the ground inside his own area, but referee Michel Kitabdjian, may his name be cursed for all eternity, blithely waved both appeals away.

Leeds United fans on the night expressed their displeasure and sense of injustice in the most violent manner, resulting in a subsequent European ban for the club. It was a night, to quote a distinguished American president on the occasion of Pearl Harbor “that will live in infamy” – and, believe me, in a football context, given the scale of the injustice and the prestige of the trophy at stake, that oblique comparison does not seem invalid.

Subsequent interviews and retrospectives have been interesting in that there has not been much evidence of the Bayern players in that final disputing the injustice that took place. If anything, they tend to hold their hands up and acknowledge that their triumph was a mixture of luck and larceny – Leeds were robbed, not only of that big, beautiful trophy, but also of European Cup qualification the following season. Uli Hoeness, the great Bayern forward, was once interviewed and asked about 1975. In his own words, he said that the result was a travesty. The better team lost and they lost for no other reason than the performance of the referee. That’s cold comfort four decades on, but it counts for a lot in any debate about the fairness or otherwise of the outcome that night.

I remember the Final well, it was a shattering experience for a 13 year old kid who was dreaming of seeing former manager Don Revie‘s great team put the seal on their immortality. And it was just as devastating for the White Army who followed United to Paris – they deserved better than a tawdry con trick, especially after they’d witnessed their heroes being robbed of another European trophy two years earlier in Salonika – take a bow Christos Michas, another spectacularly bent UEFA referee. It makes you wonder – has any other club been blagged quite as often and quite as lavishly as Leeds United?

We all know the answer to that. But all this time later, we still hold our heads up high, knowing that the proof is out there and that, morally at least, we have two more European trophies than the record shows. Some of us will be campaigning to our last breath for UEFA to recognise this, retrospectively award us our trophies, and set that official record straight.

All together now: “We are the Champions, Champions of Europe…”