More Honours For Man U 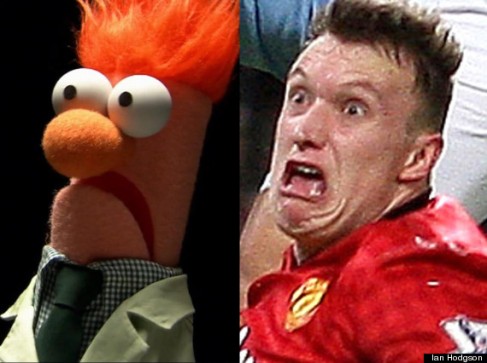 If anything could possibly top-off another fantastic season for the Mighty Man U, it has to be the news that their young and heart-meltingly handsome player Phil Jones has been honoured by Hollywood, not once but TWICE.  In a glitzy ceremony in Beverley Hills, Jones – described by well known but demented judges as potentially Man U’s greatest player – was awarded the Top Prize for the prestigious 2013 Hollywood Awards (Man/Muppet Lookey-Likey Competition) for his uncanny representation of Beaker.

The President of the Honors Panel, his voice shaking with emotion, stated “This is a wunnerful moment for me.  I’m a big fan of those there Uniteds, all of us folks hereabouts are just crazy about those boys.  They have to be the winningest Franchise on the Englandish side of the Pond, and we’re real proud to be able to honor Phil this way.  He makes a great Beaker, just great – I plumb could not tell them apart when we came to judge this category. We hope that Phil will enjoy this accolade, we’re all real happy for him here in the US Manchesters Franchise fans family.”

When we tracked down the genuine Beaker for his comment on the matter, he confined himself to a rather cryptic “Meep.”

The Jones boy has been successful in another category of the Awards, walking away with “Best Gurn” for the same image used to compete for the Best Muppet Award.  The Honors Committee pronounced themselves “very impressed” by Phil’s winning gurn, describing the look as “a face like the smell of gas”.  One judge who wished to remain anonymous enlarged upon the panel’s captivation with the stalwart defender’s mobile features.  “Phil is a phenomenon,” he gushed, “and we’re truly thinking of passing on his credentials to NASA – because that there boy, if they gave airmiles for having a face like a smacked ass, why he could be the first man on Mars.”

Phil Jones was unavailable for comment today, as he was on duty at the Theatre of Hollow Myths.  It is understood that retiring Man U manager Alex Ferguson may figure in next year’s Muppet Awards, but no confirmation has been received; however he is already posted as an early favourite in the “Animal” category, just ahead of Luis Suarez in the advance betting lists.