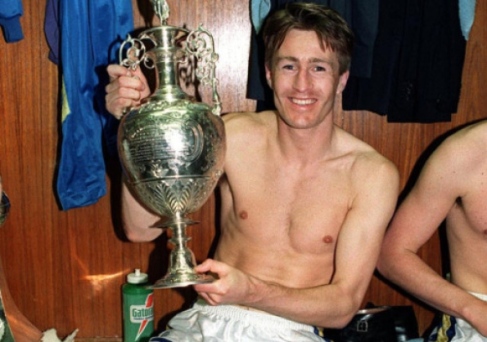 It all started with a slightly bizarre Yorkshire Evening Post back page headline.  “Chapman Wings In”, it screamed – signaling Leeds United’s signing of the tall striker for the 1989/90 run-in.  A winger he most certainly was not, but many Leeds fans didn’t really fancy him to be all that much of a centre-forward either and it’s fair to say that the bulk of the support weren’t exactly overwhelmed by Sergeant Wilko’s latest transfer swoop.  But Lee Chapman was to win our hearts as he trod a goal-laden path to the top with Leeds, and any slight technical shortcomings were more than outweighed by his willingness to get in there where it hurts, to put his head in where many would hesitate to risk a boot.  Whites fans do love a recklessly brave warrior who’s worthy of the badge.

I well remember seeing one example of this bravery at close quarters when I attended a 0-0 draw at Tottenham shortly after we were promoted.  Challenged aerially as he went for a ball near the touchline, Chappy hurtled off the field of play to land senseless in an ungainly heap, face-first on the perimeter smack in front of where I was sitting.  Thus I was an unwilling witness to the worst case of gravel-rash imaginable when Leee (as he was fondly known by The Square Ball fanzine) tottered to his feet, his classic profile seemingly having been scraped off to a large degree by the unforgiving Spurs running track.  Such a mess of grimy blood and snot had to be seen to be believed, and I honestly wondered if he wouldn’t be out until the end of the season; but Leee – true to courageous form – was back in double-quick time to finish the campaign with thirty goals.

The following season he managed to break a wrist in trying to save a cup-tie at Elland Road, and during his absence we took the fateful decision to recruit enfant terrible Eric Cantona.  But again Chappy came back, and played a far greater part in that season’s title success than the mercurial Frenchman.  Brave he certainly was, and an unerring gatherer of goals too, sometimes clumsy in his execution of the finish, but still lethally effective.  The highlights were many – a hat-trick at home to Liverpool in an epic 4-5 defeat when he had a goal wrongly disallowed to deny Leeds a deserved draw.  Chappy had this wonderful knack of hurtling like some blond Exocet missile to connect with quality deliveries from either flank; goals at Aston Villa from a Mel Sterland cross, and at Sheffield Wednesday, courtesy of Gary Speed, stand out in the memory of those who were lucky enough to be there.  And in that Hillsborough match there was a rare glimpse of Lee’s unsuspected streak of genius as he picked up possession on the right, burst between two floundering defenders into the area, and pinged a shot against the Wednesday crossbar.  It was the gilt-edged stuff of absolute fantasy.

Lee Chapman was not a player of extravagant talent, nor did he play pretty football embellished with flicks and tricks – not usually , anyway.  But he was a devastatingly effective spearhead for Leeds over a period of several seasons, his time at the club coinciding with the second-greatest period in our history, his goals securing many a valuable win and draw, home and away.  He is fondly remembered as an archetypal Leeds player – fully committed and willing to risk injury for the sake of the shirt.  Memorably, he returned for a brief loan spell in the mid-nineties, welcomed back into the fold by rapturous Elland Road applause, only to be sent off for a stray elbow as he challenged for yet another high ball.

Leeds have had many great centre-forwards in their history – from the peerless John Charles downwards through Mick Jones, Joe Jordan, to the more modern heroes like Tony Yeboah and maybe even Jermaine Beckford.  All those names have notable achievements on their Elland Road CV, and Lee Chapman deserves his place in such a Hall of Fame; as tribute to his attitude, his bravery and of course his goals.  For a Leeds United centre-forward, there can be no higher praise than that.