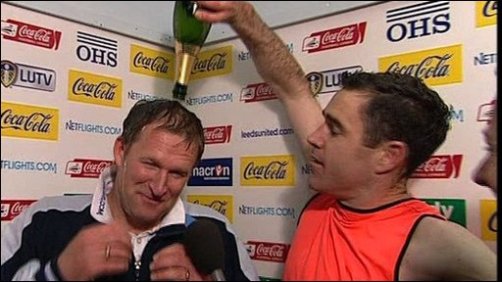 The happiest of happy birthdays today to Simon Grayson, the man who stands third in the ranks of all-time great United managers, surpassed only by longer-serving luminaries who brought the League Title itself to Elland Road.

Coming as he did to a once-great club at the very lowest ebb of its historical fortunes, Simon was the driving force behind the start of a Leeds revival that is still, slowly but surely, heading us back to the top-flight pastures we used to graze with such relish and assurance.  The fact that we’ve had those dark League One days will, when we are back, make success taste all the sweeter.  Simon Grayson is the figure in United’s history who will forever be remembered as kick-starting that process – and delivering us a rare and treasured win at the Theatre of Hollow Myths into the bargain.  To go to the home of the Champions as a third division side, to outplay them and out-fight them, to win by a goal that could so easily have stretched to a margin of three and to dismiss the Pride of Devon from the FA Cup – these are achievements that will write Grayson’s name indelibly into Leeds United folklore.

It must be remembered also that Grayson achieved all of this against a background of almost a decade of decline, with a demoralised support and a chairman who could charitably be described as “less than supportive”.  In an entertaining forum the other night, Simon and some of his colleagues from his time at Elland Road – well, let’s say that they “lifted the lid” a little on his time as United manager, and on his relationship with the Chairman and various of Bates’ cronies and dressing-room spies.  The natural conclusion is that Grayson has finally received his financial entitlement from Leeds United and no longer feels confined by any “gagging order”.  I do hope that’s the case.  Simon was treated shabbily by the Bates-regime Leeds United, both in his tenure and in the manner of his departure.  His is a dismissal I can’t think of without regret – although it clearly has to be said that we have the right man for our times now.

Simon Grayson, 44 years old today and with a long managerial career still ahead of him, already has three League One promotions to his credit, and appears to be working on a fourth at Preston.  Leeds fans should wish him nothing but well, may success crown his efforts at Deepdale, the home of a fine old club and a great name in English football.  Should his path lead him back to the away dugout at Elland Road in the future, Simon Grayson should be assured of a warm welcome as befits a United legend.