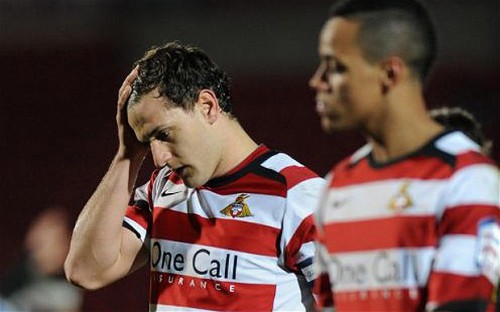 As Leeds United’s season came to a brighter than expected end, with a battling draw against play-off hopefuls Derby, events lower down the table in the tawdry scrap of the relegation dogfight may well have already had an effect on the Whites’ prospects for next time around.

Leeds did undeniably well in what was a dead rubber against Derby.  After going behind early and suffering a couple of further scares, United pressed their higher-placed opponents hard for the bulk of the remaining time in the game and the season; they had a couple of penalty claims turned down, Ross McCormack was slightly unfortunate to see a vicious free-kick punched out by County keeper Grant – and Michael Brown put in an all-action, give-me-another-year’s-contract performance that included a Cruyff turn which had you thinking suspiciously about the origins of those mushrooms you had for breakfast.

The equaliser, when it came after 50 minutes, was another high point in the productive season of Matt Smith, one of the few real bright spots of a blighted campaign.  Leeds could well have won the game, but the level of performance was encouraging in itself.  It is likely, though, to be a case of “too little, too late” for many of the squad, as plans will already be afoot for a hiring and firing summer as Cellino’s Italian Job gets under way.

Next season, when it comes, will see a marked reduction in one of those irritating factors which have impeded Leeds United’s progress far too often and for far too long.  I refer of course to “Cup Final Syndrome”, whereby a number of smaller clubs try their little hearts out when facing the Whites – and often end up thrashing us.  It’s a phenomenon particularly noticeable in local derbies yet, thanks to the ineptitude of our fellow Yorkshire clubs, not only have we ended up as top dogs in the county yet again, but we have also contrived to see the back of two of those annoying and inconvenient pests in the shape of Barnsley and Doncaster Rovers.

Barnsley bit the dust last week with a 1-3 defeat at Middlesbrough – helped along the way, I like to think, by the rare dropped points (five of them) in their games against Leeds, points they would normally have nicked in previous seasons.  So, we did our bit to see off the Tykes and, even though Donny won at Elland Road recently, our 3-0 win at their council ice-rink early in the season has helped to dispatch them.  Which is nice.

Doncaster’s relegation was, if anything, a lot funnier than even Barnsley’s, coming as it did right at the death of the season when they were on the very brink of being safe.  They were happily settling for a narrow defeat at Champions Leicester in the secure knowledge that Birmingham were two down at Bolton and surely doomed.

But then Lady Luck did one of those graceful pirouettes for which she is rightly notorious, and Brum battled back – scoring through Zigic and then laying siege to the Wanderers goal.  Three minutes into stoppage time, and they pulled that last rabbit out of the hat to equalise and achieve an unlikely late escape, simultaneously sealing Donny’s fate – much to the horror of the Rovers fans and much to the amusement of anyone in Leeds colours who harbours unpleasant memories of Wembley, that day when the concourse was lop-sided with United fans, but when the minnows perversely triumphed.

There are a few reasons for hoping that next season will be better for Leeds – prominent among them of course being our understanding that we are no longer operating on Skid Row, having moved across town to Easy Street. Whether that works out, and to what extent we might now be competing at the plusher end of the transfer market, remains to be seen.  But the lessening of the intensity of competition in local derby terms can do nothing but good, as Leeds have generally speaking made really hard work of these matches, to the detriment of the overall league picture.

Even though we have ended up on top of the Yorkshire standings, our results against Huddersfield and the Wendies have left much to be desired this season as in many before.  At least there will be a little less of this unseemly parochial skirmishing next season – even given that we will have Cardiff City to add to the unsavoury attractions of Millwall.

And so, another season ends, bleak and disappointing from a Leeds United perspective, but with distinct compensations elsewhere in the form of the enjoyable suffering of others.  As I write, Man U have just slipped to their umpteenth home defeat this season – even under the peerless guidance of Sir Ryan Giggs – and Cardiff’s brief flirtation with the top flight is over. There may well be a bonus in the form of relegation for Norwich Bleedin’ City later this weekend.

Wolves and Fulham will be with us next season – always attractive fixtures – and the games against Cardiff and Norwich should be spicy, too.  We must hope that the Leeds squad can be reshaped and re-motivated, to such a pitch that we will be truly competitive next time around.  Allowing for all the distractions and side issues, we weren’t that far short this time – but it all went wrong when events off the field took over.  Next season should be slightly more peaceful – or is that hopelessly naive?  And, if all else fails – well, we might still have Old Man Browneh, weaving his elderly magic and pulling off Cruyff turns aplenty to bedazzle the opposition.

It certainly is a funny old game. 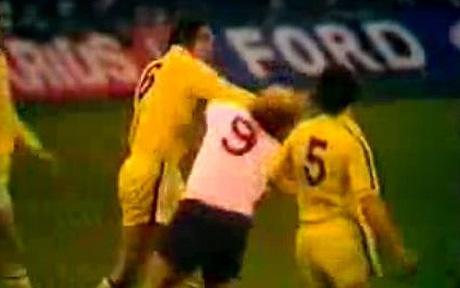 If the form book has its way this lunchtime, Leeds United’s season will peter out with a whimper, not a bang – as Derby County, on a seemingly unstoppable roll against us, head to Elland Road in search of their eleventh consecutive victory over the Whites of LS11.  Chuck in an almost-forgotten League Cup dismissal at the hands of the Rams in 2009, and defeat for Leeds today would make it a dirty dozen straight wins for Derby, our one-time rabbits – a team we just couldn’t help beating in the eighties and nineties.  It’s a reversal of fortune that would dismay anyone with Leeds sympathies and – particularly given the one-way street that is the rivalry between the two clubs – you’d expect Derby fans to be over the proverbial moon.

One-way street?  Well, let’s face it – it’s a fact that they regard us with a deep and abiding loathing, whilst we treat them with a casual and disrespectful lack of attention most of the time, unless we’re actually about to play them.  This state of affairs isn’t that unusual – Leeds have a similar situation with a few clubs, the likes of Bradford, Barnsley and Hull for instance – they passionately hate us, we ignore them.  It’s humiliating for the seething fans who have this unrequited hate – as you can easily divine from reading some of the frustrated scribblings of Rams supporters out there in the internet world.  One has even gone so far as to take up his quill and describe his feelings of hatred and bitterness in a piece of embarrassingly bad doggerel which he is pleased to call verse.  It’s true. Can there be anything more cringe-worthy and humiliating than that?

The poet concerned goes by the nom de plume of “I. Saw” (poets often have pen names, in order to protect their artistic integrity – but I can reveal that this latter-day Bard’s real name is “R. Sole”) and he’s described as a RamZone reporter – presumably this is his day job when he’s not illuminating the literary world with his lyrical verse.  His Leeds United Meisterwerk, artistically entitled Ode to the Dirty, was actually written a few years back – but the guy’s fellow Rams are so pleased with it that they like to take it out, dust it off and republish it, suitably updated, whenever their latest United Cup Final is imminent.  Indeed, it’s refreshing to see that the Derby fraternity have formed such an attachment to this piece of work, undeterred by considerations of originality, repetitiveness – or by the fact that it’s crap.

I won’t bore you with too many details as to the content of this epic whinge – it’s accessible via the link above if you really feel you need to read the whole thing – suffice to say it describes how the author first developed a hatred of Leeds because of the Whites’ habit of trouncing his favourites every time we played them.  He goes on to bleat piteously about injustices and bad luck, before acknowledging that things have looked up for County lately and stating in petulant tones that this, however, will never be enough to make up for what went before.  Technically as well as emotionally, it’s the work of a sulky 9 year old – the extraordinary thing is that the Derby fans seem so inexplicably proud of what is a hymn to excruciating humiliation.

The moral appears to be that, however long Derby’s current stranglehold over Leeds United may last, it won’t be enough to erase traumatic memories for their fragile and hyper-sensitive support.  Perhaps the best thing that could possibly happen is a rare win for the Whites, to jolt the Rams fans out of obsessive mode and focus them on their forthcoming play-off campaign. Because it would be a shame if they didn’t go up, wouldn’t it?

It’s unlikely, but not impossible that Leeds United will beat Derby today. But if they do, look out for a tortured follow-up from the less-than-talented pen of the Derby Bard – perhaps something of an elegy, mourning the end of their run of success.  Because you get the feeling that the grief of such a defeat would not be assuaged, even by promotion.  That’s a little easier to understand when you look at what happened to Derby the last time they played at top level.  They had a car-crash of a season, were relegated before the last of the Christmas trimmings came down and set all sorts of new records for being disastrously, calamitously bad.  So there may not be much for them to look forward to if they DO go up, and the “Bard” can be expected to wax dolorous again when they come tumbling back down. Poetic justice, you might call it.

On the whole, though, I wish them success.  After all, I Saw’s poetry is the kind of artistic effort that can make your eyes bleed and your soul cry out for something with more cultural merit, like Crossroads or Blankety Blank – so we really don’t want any more of that.  I’m not sure if this little critique will find its way back to the enthusiastic amateur, but if it should, then I have a message for him.  Please – talk to someone, before it’s too late. Don’t ever attempt poetry again, as it may be seen by people less kind and understanding than I am.  And for heaven’s sake, get some treatment for this Leeds United problem you have, before it reduces you to even lowlier feats of self-humiliation.  That’s no way to go through life, surely – being a Rams fan and living with that ever-present inferiority complex is punishment enough.

Oh, and – good luck in the play-offs.