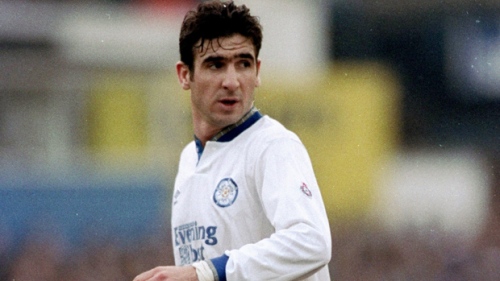 Look back in anger: Eric enters the fray

One notable landmark this weekend was the 20th anniversary, yesterday, of Eric Cantona’s infamous kung-fu kick at Selhurst Park – the original and definitive case, it has been said, of the shit hitting the fan. It took me straight back, not to that martial arts debacle, but over two years earlier to February 8th, 1992 and a Leeds United match I’d attended in the hopes of seeing us make another stride towards becoming champions of England. The venue was Boundary Park, Oldham and the occasion was the day that enfant terrible Cantona made his bow in Football League, Division One.

It was a day of significance for Leeds United and, in a broader sense, for English football as a whole.  Cantona would shine briefly and fitfully at Leeds, winning an authentic League Championship medal with United before going on to collect several pale imitations on the wrong side of the Pennines.  But on that day of his début, all of the triumphs and controversies of his English career lay unsuspected in the future.  Despite the clamorous press attention – and the spectacle of the excited French hacks and cameramen clustering around the United bench was highly unusual, to say the least – this was an inauspicious start for the mercurial Frenchman. Leeds lost 2-0 to a goal in each half from an Oldham side that usually gave us problems. We witnessed proceedings glumly from the open end behind the goal and Cantona’s introduction as a second-half sub for Steve Hodge did not greatly influence the scrappy nature of the game. 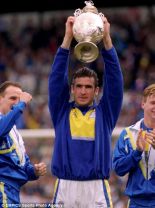 It says a lot that one of my clearest memories from that game is not of Eric’s bow, but of a lethally noisome fart released by somebody in the tightly-packed mass of Leeds fans. It was a minor masterpiece, rank and ripe – it made you think of condemned cheese stacked in a neglected pig-pen, and it also had you sincerely worrying for the perpetrator’s health. “Christ, fetch the medics!” a plaintive voice was heard to demand, drawing nods of sympathy from fellow sufferers whose eyes were watering as their nostrils tried to run away. To cause that kind of stench on an open terrace in blustery Lancastrian conditions was a notable feat. No slouch in that field of endeavour myself, I could only shake my head in awe and wonderment. I would have been rightly proud of that one.

That Cantona’s entry into English football should be marked by the memory of a fart seems somehow appropriate now. Mention his name to any Leeds fan, and their nose will wrinkle with involuntary disgust; it’s as if the ghost of that legendary flatulent outburst is still summoned by the memory of Eric’s bitter-sweet time with Leeds.

Eric was not, after all, a taste instantly acquired. Thinking back, the English press were not initially that impressed at all. They would refer to him as “Contonaah”, emphasising his relative obscurity outside of France, and I remember one radio summariser reporting on his contribution in a 1-1 draw at Everton: “He doesn’t seem to jump his height or pull his weight,” he mused, blissfully ignorant that he was referring to a man who was but one cut-price transfer away from becoming a press hack’s icon, compulsorily revered. But he was well on his way already to cult status at Elland Road – when he abruptly departed in the most horrific circumstances imaginable.

That infamous transfer has been done to death as various hacks linger lovingly over alleged details of phone calls between Elland Road and the Theatre of Hollow Myths. My own take on it is that Eric and the Pride of Devon were made for each other, but not in a particularly good way.  They naturally set about “imagifying” him as is always their wont, intent on marketing him to their credulous and glory-hungry fans as “moody and magnifique“. So we got the trademark stubble and the turned-up collar – but Eric’s behaviour also changed, markedly for the worse, accumulating a flurry of red and yellow cards in stark contrast to his time with Leeds – and culminating in that notorious “kung-fu” incident.  But even that wasn’t the worst of it, not from a Leeds United point of view.

Whilst I acknowledge the Man U truism that club and player had matching conceit and arrogance such that they belonged together, I still feel that Leeds let Eric go far too cheaply – a huge and unforgivable mistake.  Man U were desperate for a striker at the time and had done their best to prise David Hirst from Sheffield Wednesday. They’d been prepared to go to £5m for him, and it’s to Wednesday’s credit that they told Taggart where to stick his money. But really, that offer should have set the benchmark; Leeds United should have opened negotiations at £5 million and seen what happened from there. They’d have paid up, or gone elsewhere. Either would have been preferable to what actually happened, for in letting Cantona go to Man U on the cheap, Leeds provided a catalyst for the sickening era of Devonian dominance that followed. That’s a terrible, terrible thing for any club to have on its conscience.

Twenty-three years on, that dominance seems finally to be at an end.  Cantona actually lasted only four years or so in England, departing the scene with some proper silver and plenty of fools’ gold. He has since made a career of sorts in films and adverts, having considerably less impact than United’s other footballer-turned-movie star, Vinnie Jones. It all seems such a terribly long time ago now, and for far too much of the period in between the game was in thrall to a choleric Glaswegian who bullied his way, aided initially by his talismanic Eric le Dieu, to far too much success for the liking of any real football fan. Strange to think, it all started on that blustery and smelly afternoon in Oldham, when we were all innocently wondering if this new foreign star could salvage a point for us, and maybe even help us win the last proper League Championship. At least, in the final analysis of that last pre-Murdoch season, it all came right in the end.

The verdict of history on the Cantona move from Leeds, to what is now seen as his spiritual home, has to be that it was the ultimate betrayal of supporters by their club. Leeds United and the men behind the deal were derelict in their duty towards passionately involved fans, both for sanctioning the move in the first place and for failing to extort a far higher price from a club desperately searching for some devil up front. It was a crass piece of business that showed a want of empathy with fans, a lack of the vision that separates devotees from mere functionaries and businessmen.

A few years later, United refused to sell Jimmy Floyd Hasselbaink to a rival English club and held out for a six-fold profit in Spanish doubloons into the bargain. That was more like it, surely. Had Leeds United chosen to up the ante when Man U came a-calling at the Champions’ door, it’s doubtful that the path of history would have been altered much, if at all. But at least we might have salvaged some precious self-respect from the whole sorry situation – and we’d have been better-placed to laugh at the beginning of the end that night when Eric sailed studs-first into the crowd. Just imagine – if he’d done that whilst at Leeds…