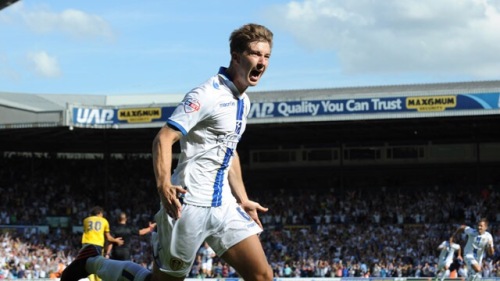 Luke Murphy has seen his stock rise dramatically among the demanding constituency of Leeds United fans of late – and not just for his markedly improved form during the latter part of last season. That upping of his game, to more nearly approach what is rightly expected of a man with a seven-figure price tag, was certainly welcome enough, and warmly received by the Elland Road congregation. The resulting blast of approval must have been music to the ears of a man whose tepid earlier displays had earned him more brickbats than bouquets. But these recent accolades have, of course, resulted primarily from Murphy’s willingness to sign a new deal – reportedly on significantly lower terms.

Just run that by yourself again, with the stereotypical modern, mercenary, grasping footballer in mind for the purposes of comparison. Take Raheem Sterling, for example. That young man’s surname bears more than a coincidental similarity to the unit of currency in these islands. This is a young lad of sublime talent who has proved himself, by his actions of late, not big enough to play for a club like Liverpool FC, much less their rabidly fanatical fans.

Sterling will have benefited greatly in financial terms from his move to Man City. He may even win a Cup or two in the seasons to come, as he sits on the bench for Manchester‘s premier club. But he has lost far more in terms of reputation and respect – though exactly how much that means to today’s young, deeply shallow, relentlessly materialistic Princes of Association Football must be open to grave doubt.

So there you have Sterling on the one hand. And there’s our own Luke Murphy on the other. You might wonder what options there were in front of young Luke, before he committed the next four years of his career to Leeds. It’s a fair bet that there will have been an agent hovering somewhere close by, whispering blandishments of temptation into those callow ears. It’s good, after all, for agents when footballers move on – and if Murphy could be persuaded his future lay elsewhere, then you can be sure that Leeds would have been looking to recoup their £1m outlay. And that’d have meant some wedge for Luke – and any agent – quite apart from the terms he might expect from a prospective buying club.

But Murphy has opted to stay, and what he has gained in increased security by the greater length of his deal, he has largely lost by virtue of a reduced weekly wage. He’s still remarkably well-off, clearly, compared to other lads of his age – or mine, come to that. But it does warm the cockles to see a young pro prioritising where he wants to be, over what he wants to be paid.

The contrast between Sterling and Murphy is stark, and it goes way beyond matters such as ability and potential. Sterling has – it’s blindingly obvious – had his head turned to a degree which makes that poor young lass out of The Exorcist seem comparatively stiff-necked. It is a pity that such a major talent should have been so poorly advised as to treat the greatest club and the greatest fans he will ever play for, quite so shoddily.

Luke Murphy, in that precisely identical situation of playing for the greatest club and fans he’ll know in his career, has chosen to show respect rather than contempt, humility rather than arrogance. It’s an attitude that deserves reward, and this blog wishes him a triumphant season, crowned with success. As for Sterling, we wish him not too many splinters in his arse as he bench-warms his way to cups and titles with Citeh.

It does rather beg the question of whether we Leeds fans should perhaps be wary what we ask for, the danger being that we might get it. Obviously, we all want promotion, followed by establishment as a Premier League power, with silverware and continental domination, for preference, as is surely our Don-given destiny. But, should that come to pass, will we really be able to relate to and respect the wearers of those iconic white shirts? You do have to wonder.

Sadly, when Leeds do become successful again, the squad we’ll be supporting is likely to contain rather more Sterling-like characters – eye on the main chance and sod the supporters – than it will the good, honest Murphy type. That, we can assume, will be part of the price of success. And we all crave success – don’t we?

The thing is though, this story of two young footballers, Sterling and Murphy, leaves me wondering if that success would really be worth the price we’d most probably have to pay.