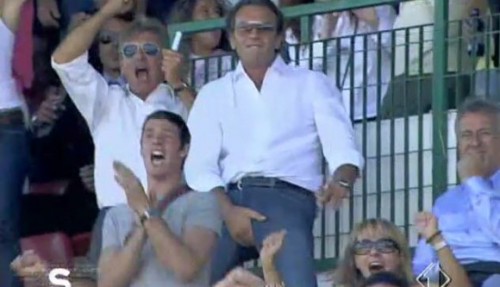 The real culprit in this sorry, sorry affair

In the wake of the Lucy Ward Industrial Tribunal verdict, there has understandably been a welter of press and social media comment, some of it informed, some of it less so. Leading the way, as is only right and fair, is the Yorkshire Evening Post, which today carries a front page editorial piece entitled “How Much More Can We Take?”. For the most part, this is a justifiably explosive torpedo of a piece, aimed accurately right between the eyes of United owner Massimo Cellino and his cronies past and present. This blog has no argument at all about that.

All the main aspects of what came out of Ms. Ward’s successful Tribunal appeal against her dismissal (with an associated successful claim that she suffered sex discrimination) were accurately covered in the YEP article. This is as one might expect from a reputable publication with United’s – indeed the whole city’s – interests at heart. The YEP carries a banner tagline, Twitter style, of #championingleeds. Most laudable, if a little ironic, in the light of the tone parts of this front page article carried.

In summary, we read in the Post of “this sorry, sorry affair”, with suitably disapproving reference to the Tribunal findings that Cellino did indeed make sexist comments to Ms. Ward (Football is no place for women. They should be in the bedroom or beauticians). The Tribunal found Lucy Ward to be an honest and truthful witness, whereas the testimony of the witnesses ostensibly representing the club had scorn poured upon their veracity and credibility. All very damning for the losing side in this legal play-off; for Lucy Ward it was a day of triumph, tinged with sadness at the treatment she has received whilst working for the football club she loves.

The nagging problem with the coverage of this case, though, is a tendency for both Press and Judges to lay blame at the door of Leeds United as an entity. The Post refers to a once proud club being dragged through the mud. Leeds United is still a proud club, ladies and gentlemen of the Press. Its history and achievements are reason enough for that, as well as its large and fanatical support. Football clubs don’t make sexist comments – it’s ignorant, loutish people who do that – people like Massimo Cellino, convicted fraudster and an unreconstructed male chauvinist who has no place in the 21st century, let alone in charge of a world famous sporting institution. The club, and its iconic name, are not being dragged through the mud. If that were the case, then we’d all of us, all those thousands of fans all over the world, be liberally daubed in the sticky stuff. Whereas, in actuality, the reaction I’ve seen so far is of pleasure and relief that Lucy Ward has been vindicated – together with anger and resentment that our maverick owner has yet again disgraced himself whilst associated with our great club.

The Tribunal panel was at it, too, according to the Post. They professed themselves to be astonished “that this respondent (Leeds United) had no awareness of the ACAS code or what it contained and that it failed to comply with what are regarded as basic principles”. Well, with all due respect to the august members of the Tribunal panel, that is just so much nonsense.

Football clubs, let’s face it, are neither aware nor unaware of ACAS codes, proper procedures or basic principles – because they’re institutions, not sentient beings. As such, they are at the mercy of those who own and run them. To blame Leeds United for failing in any particular matter of legal principle or process of arbitration – is like blaming the RMS Titanic for pranging on an iceberg. It’s plainly ridiculous because the blame resides with the man at the helm, if anywhere. And this is more important than you might think. Because it’s no mere matter of semantics.

If Leeds United were capable of taking the blame, or of having its name sullied, as has been suggested, then its adherents – we, the fans – would find ourselves tarred with the same brush (as we have been tarred on our own account often enough in the past half-century). But, as we have seen, the majority are firmly behind Lucy Ward and delighted that she has found justice at last. Meanwhile, if the focus is lost as it threatens to be, the true culprits may be permitted to dodge the spotlight that should properly be exposing them to the public glare of disapproval. So let’s not lose our focus here. It’s people, fallible, wrong-headed, unscrupulous and deeply misguided people, who are to blame for what is indeed a sorry, sorry affair. And we all know all too well who those people are.

I’ve got no problem with the Yorkshire Evening Post, or any other reputable paper, shouting from the rooftops for justice, whether it be for Lucy Ward, the United fans or Leeds United itself. More power to their elbows, I say. Good on them. But, please, YEP – keep your aim true and don’t be led down side alleys of deflected blame. Because, when you say “But this sorry saga isn’t about just about Mr. Cellino alone“, you make a very basic and damaging mistake. This sorry saga is about Mr. Cellino alone. He is the sole arbiter of club policy and the buck should rightly stop with him. He may even have some dim awareness himself of this; he was certainly noticeable by his absence for the Tribunal verdict.

Cellino has the attitude of the French king who proclaimed L’Etat, c’est moi. (I am the State). Louis XIV established absolute monarchy in France, and left his descendants to pay the price to Madame la Guillotine. This is what makes those of us calling for Cellino’s head feel that we have a point – there’s that same arrogant “don’t blame me, just obey me” feeling about the Italian. To say that the club as an entity should take even a morsel of blame for his failures and wrongdoings is not only a category mistake – it’s damned unfair. Let’s be in no doubt that Cellino is the proper recipient of all the blame. Newspapers, and indeed Tribunal judges, should know better than to suggest otherwise.

Ask Lucy Ward, who has suffered grossly unfair treatment at the hands of a sexist nutcase whilst working at the club she loves and has served so well. She knows who is to blame, as she knew all along. She’s seen to it that the relevant people will be held to account – not the bricks and mortar, glory and history, blood, sweat and tears of Leeds United Football Club. In this, she may well have done our beloved United a great service, somewhere down the line.

In a nutshell, then: Owners may come and owners may go, with their associated scandals and baggage. But Leeds United is still Leeds United, and always shall be. Let that be properly understood.