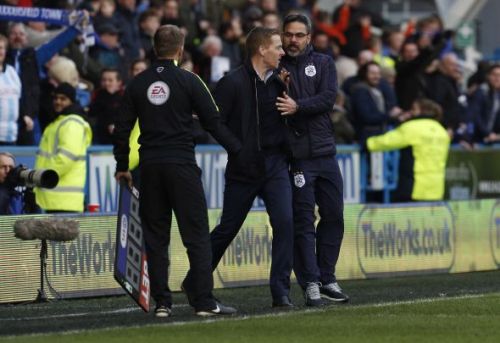 When the prizes are handed out at the end of this Championship campaign, it may well be that this feisty – for want of a better word – encounter between Huddersfield and Leeds United will be the one to look back on and say “that’s when the season turned”. Not so much for the result – because I fully expect United to finish above Town despite the Terriers’ success today. The significant factors to come out of this game will be the effort and emotion that Town poured into edging the contest – and the bonding effect on Leeds United of the little contretemps that followed a fortuitous winner for the home side.

I feel that United will now kick on. Burning with irritation at their opponents’ classless triumphalism and a perceived lack of respect, the Leeds players and coaching team will find a new level of togetherness. The scenes towards the end of this derby showed a “cut one of us and we all bleed” attitude that has always served Leeds teams well. The players reacted like tigers when Town coach David Wagner topped off his ill-advised pitch invasion by encroaching on the Leeds technical area. Garry Monk stood his ground, and his players piled in. Great stuff. Its something to draw on for the rest of the season, and I fully expect that to happen. I’d give a lot to be a fly on the wall at Thorp Arch when the players reconvene this week. Feisty will be the least of it.

As for Town, they could well become victims of what I have in the past termed “post-Cup Final Syndrome”. It affected supposed big boys Newcastle in the aftermath of their Elland Road win, and one glance at Huddersfield’s next six fixtures shows that there is potential for the kind of falling-away that I’ve often noticed in smaller teams after managing to win against Leeds. If this sounds arrogant, then I’m sorry. It’s borne out by verifiable facts, so there you go.

The lack of class embodied by the Town coach was sadly not confined to the touchline. In the stands as well, Terriers fans, hyped beyond all taste and reason, flourished a Turkish flag in a deliberately gloating gesture designed to rankle with Leeds fans still haunted by the murders in Istanbul 17 years ago. On the taste scale it was way down towards the Millwall and man united end of things. You expect more of fellow Yorkshire clubs, but clearly Huddersfield, as we’ve long known deep down, is a taste-free zone. The media make nothing of this sort of thing, but it’s among the worst aspects of our game today – and one can only feel sympathy for the bereaved families when they see yet another example of idiots taking some sort of sick, perverted pleasure in the deaths of innocent football fans.

The upshot of this afternoon will turn out to be one result that doesn’t change much, and two off-field factors that could affect things greatly. Watch for Huddersfield to fade away and see how Leeds now pick up. There’s a long way to go, and much can yet happen.

And should these two clubs chance to meet again in the play-offs, do you think that Leeds will now lack for incentive and motivation? Not a chance. Be afraid, Town. Be very afraid.