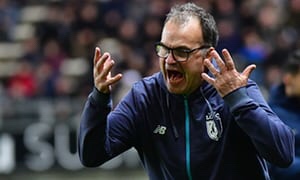 The Football League, having received informed assurances from omniscient football experts of the calibre of Steve Evans, now have a strategy for keeping Leeds United well away from promotion even in the event of them appointing as manager the man Guardiola and Pochettino regard as “the best coach in the world”.

According to Evans, the fatal flaw of legendary football coach Marcelo Bielsa is that he “won’t fancy it on a cold Tuesday night at Millwall/Rotherham/insert football shithole of choice”. This priceless nugget of information will therefore inform the League’s approach to arranging United’s fixtures in the coming campaign.

The upshot of this is that Leeds will face only fierce smaller clubs with massive anti-LUFC chips on their shoulders. All games will be played away from Elland Road, with no hot water being available, exclusively on chilly midweek evenings between late October and early March. This will involve significant planning difficulties, but the strategy is described by an EFL spokesman as well worth the trouble, with “the end justifying the means”.

The League has revealed that it will remain in consultation with Mr Evans on an ongoing basis, drawing on his knowledge of pansy foreigners to assist on the potential difficulties presented by United’s imminent appointment of a decent coach. It is understood Evans has also commented that “these latin types don’t like it up ’em”, so the administrators of the game are reviewing the possibility of cold steel bayonets being provided for home dugouts when Leeds visit.

No further statement will be issued until the Leeds vacancy is filled, though it is understood that the situation will be reviewed urgently in the event of United bucking the bookies’ odds by appointing Mr. Mick McCarthy, who has made a career out of winning at hostile football shitholes on cold Tuesday nights.

More on this developing story as we get it.