Unrivalled support – the part of football where Leeds still rule

In the wake of Paul Heckingbottom‘s long, drawn-out, yet curiously unceremonious dismissal from his job at Leeds United, it’s important now to face up to certain unpalatable truths. The next United manager will be the club’s TENTH since 2014, giving our beloved club the unenviable title of “Highest Coaching Turnover” in that spell. That is a shameful record, a record of poor judgement and consistent failure under the auspices of successive owners. Leeds United are bang to rights on being the authors of their own misfortunes.

As a footnote to this latest sacking, somewhere amid the flurry of departures as the entire coaching staff was shown the revolving door, one of the men to leave, his contract not being renewed, was “Set Piece Coach” Gianni Vio, appointed with fanfares towards the end of the unfortunate Thomas Christiansen‘s abbreviated reign. Vio was somebody’s bright idea, yet another that didn’t pay off. It’s Leeds United who have ended up paying, over and over again, the price of rank bad decision-making, as contract after contract has had to be settled. You can see the financial folly of this, quite apart from the public humiliation of our club, when you consider that invariably it’s not just one single sacking, but a batch of them. So you multiply the cost of the settlements to be paid as contracts are more or less honoured. Then you start the costly process again – rinse and repeat.

The thing is, it’s US, the hapless, helpless supporters who are really getting rinsed. We have to suffer the slings and arrows of mickey-taking mates who follow less accident-prone clubs. In one dank corner of the national press, a certain bogroll of a “newspaper” which shall remain nameless has even had the audacity to suggest that Leeds fans must take part of the blame. With the possible exception of the dimmer end of the Twitter following, that’s arrant nonsense. Leeds fans as a vast congregation can do nothing but stand back helplessly, watching one slow-motion car-crash after another. It really isn’t good for the morale of the troops.

At some point, either now or, if not, then in the very near future as I earnestly hope, the powers that be at Elland Road must learn from the catalogue of mistakes that they have made and then repeated ad nauseam. False economy, shopping for bargains instead of concentrating on the quality end of the market, has cost United millions. They’ve set out to achieve success on the cheap, whether they’re buying players or hiring coaches, and ended up being massively expensive serial failures. That doesn’t make for good reading or writing, and the really nasty part is that the people responsible don’t take or even acknowledge the blame that is undoubtedly theirs. That’s the real sickener. And of course, they can point to that moron-market rag which is cheerfully blaming us, the real beating heart of the club.

This cycle of making do, paying up, lamenting and then doing it all again must stop. It’s time that Leeds United got serious about the business of making a success in football. Happily, there are a few behind the scenes signs that preparations are underway to make just such a quantum leap in ambition and aspiration. Capital injections, and the spreading of the net internationally to land a new manager, offer at least some cause for cautious optimism. Likewise, the names mooted as transfer targets have an unfamiliar sheen of stardust about them. It well be that Leeds United are on the point of growing up and getting serious about Life.

I certainly hope so, because surely the fans of this still great club cannot take much more of being made to look fools by association. Last season was an example of passionate support, home and away, with Elland Road packed out and the travelling army invading most of the country in their usual fanatical hordes. It was a level and intensity of support that the club did precisely nothing to merit; you have to question, though, whether another year of complacent apathy on the part of Leeds United will not see a dropping-off of support. It’s almost heresy to suggest this, but even football fans of the loyalest strip have their limit.

Perhaps Leeds will now go for a name and a reputation big enough to demand that enough time and money is provided for them to work their own brand of magic. Whether that will be Marcelo Bielsa, Claudio Ranieri, or some other high profile appointment, it is now vital that Leeds should depart from the ruinous path of false economy they’ve been travelling for so long. We must instead speculate to accumulate, not dwelling on the old nightmare of “living the dream”, but instead doing what is necessary to compete in a savagely dog-eat-dog league, to emerge, finally, into the daylight of the top flight – where this club belongs.

Carpe diem, Leeds. Seize the day, as you have yet another chance to do. Get it right, before you run out of chances. It’s time to march on together to success, instead of trudging towards the next dispiriting failure. The future starts here – and, this time, we must succeed.

Only a Madman Would Want the Leeds Job. Marcelo Bielsa Might be That Man – by Rob Atkinson 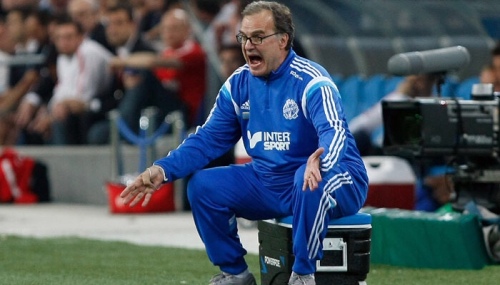 The rumours that Leeds United are set to dispense with the services of coach Paul Heckingbottom simply refuse to go away. Indeed, they get stronger with every passing hour, and crazier too. The latest embellishment to the “Heckingbottom to get the boot at Leeds” whisper is an unlikely-sounding “and will rejoin Barnsley“. I wonder if the Tykes fans would be up for that?

Leeds fans, meanwhile, are lapping up the stories linking United with any number of replacements – even before little details like creating a vacancy have been attended to. That vacancy may well be posted quite soon though; the initial trickle of Hecky Out rumours has turned into a torrent that seems set to sweep away the former Barnsley man and lifelong Leeds hater. Even now he is on holiday, a status he mentioned in the context of being sacked, when he first occupied the Elland Road hot seat. His position now is being said by many Leeds fans, having seen this riptide of rumour swell to tsunami proportions, to be well nigh untenable.

So, if Hecky is to be gone, where does that leave Leeds United? Surely, after all the comings and goings under Cellino, and with Radrizzani already on the verge of wielding the axe a second time, only a complete nutter would consider the Leeds job. Well, the Whites may just, if the latest story is to be believed, have found that nutter in the volatile shape of the madcap Argentine, Marcelo Bielsa.

Who? Actually, if you’ve had anything to do with the LUFC hashtag these past few hours, you won’t need to ask who. For those who have not seen the Twitterstorm, though, all you need to know about Bielsa is here, together with a few bright-spark edits from the usual suspects. Suffice to say that he’s a brilliant coach who has his teams play a highly watchable brand of attacking football – and also that he is, reputedly, as mad as a box of frogs. If that’s not the identikit Leeds manager after the own heart of every United fan out there, then I don’t know who is.

Bielsa is nearly 63, so even though he might be a little cuckoo, he’s no spring chicken. But any managerial appointment is a risk for a club like Leeds and, having considered at some time or other most of the rational possibilities, maybe it’s time to try the other sort. From that point of view, the man they call Loco Bielsa would seem to be the obvious choice.

If this story does turn out to be true, then it’s safe to say that it’ll be a very interesting “however long it lasts” down at Elland Road. Twitter seems excited, and I must confess I am too. So if Hecky’s race really is run – and, let’s face it, his credibility as Leeds boss has been shot full of holes with all this talk and yet not a word from the club – then we’ll need a new man in sharpish.

And who better, in that case, than a controversial, maverick, hothead madman such as Bielsa? For an insane club like Leeds, he ticks more of the right boxes than just about anyone else you could imagine. It would be a “major coup” for the Whites, but much would of course depend on Heckingbottom’s fate, firstly – and then on whether or not the Argentine would want to work in the United management structure as it stands. But it’d be a refreshing change, a man of real stature and a genuine, one-off individual into the bargain. Since demotion from the Premier League 14 years ago, Leeds have tried just about everything to recapture the good times. It might just be that it’ll take a real nutter in the Bielsa mould to get this club back on track.