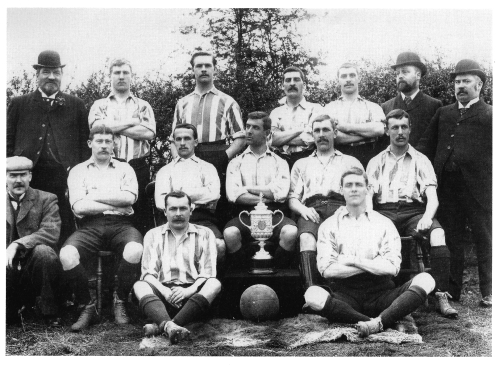 The Wednesday, victorious in the century before last

Leading up to the Yorkshire derby at Elland Road this weekend, there is one issue that needs to be put to bed once and for all, for the sake of all right-minded Leeds United fans, deluded Sheffield Wednesday fans – and Yorkshire people everywhere.

If you hang around long enough as a football fan, it can’t escape your notice that self-delusion is extremely high on the list of characteristics defining your average club supporter. It’s quite probably a defence mechanism of sorts, helping hapless fanatics deal with the many disappointments their heroes will visit upon them as they faithfully follow their club’s fortunes through thin and, most likely, thinner.

Whatever the cause, this tendency to delude oneself is powerful indeed, and rare is the football fan who hasn’t, at some time or another, managed to fool themselves completely. Bobble hats and scarves have become slightly passé as part of the fan’s wardrobe essentials – but it seems that, for most, a massive pair of blinkers is still de rigueur, whoever you support.

Two of the very biggest pairs of blinkers undoubtedly belong to the supporters of a couple of clubs in the north of England, one on the wrong side of the Pennines, and one on the wrong side of the West/South Yorkshire civilisation threshold. Man U have long been famous for the eagerness with which their notoriously insecure and needy body of support will lap up obvious myths like “Biggest Club in the World” and so on. Even to this day, new signings must chant the mantra upon entering in the portals at the Theatre of Hollow Myths – “I’ve signed for the Biggest Club in the World” they intone, dutifully, and the Man U faithful smile happily in their Devon armchairs, whilst the denizens of Madrid and Barcelona, not to mention Milan and Munich, howl helplessly with laughter. Nobody is fooled and this, more than any other, is the reason why Man U fans, despite their club’s impressive honours roll, are routinely laughed at and dismissed as clueless glory-hunters.

Back in the rightly famed Broad Acres, there exists a lesser but still highly risible Band of the Deluded, bringing me to the real point of this article. These people live, move and have their being in Sheffield, an industrial graveyard of ruined splendour and very little current appeal. They wear blue and white, they have local rivals who wear red and white – and yet they measure their every success or failure in terms of the history and achievements of Leeds United, a club 35 miles to the north, which is known around the world as the Pride of Yorkshire. But the fans of Sheffield Wednesday, known semi-affectionately as “Wendies” to amused Leeds fans, will hotly deny accusations of obsession. That, in itself, is funny – given the Leeds-centric nature of the online output from virtual Owls. But more hilarious yet is the earnest and curiously innocent belief of the average Wendy in the street that he or she follows “Yorkshire’s Most Successful Club“.

The rationale, if such it can be called, behind such a bizarre belief is based upon a crude count-up of trophies won since the dawn of time. Sheffield Wednesday is among the oldest clubs in the professional game – Leeds United, at just under a hundred years old, is a comparatively youthful spring chicken. That being the case, it will be of no surprise that the Wednesday honours list goes back rather further than the Leeds one. And it is the sheer, epochal size of that time difference that really matters here.

Leeds United had endured a depressingly uneventful existence until the arrival and masterly stewardship of a certain Don Revie. Since that time, coinciding uncannily with my own date of birth, Leeds have been the club in Yorkshire, beyond any dispute or fanciful wishful thinking from the south of that county. From a position of never having won so much as an egg cup beyond one solitary second division title in the twenties, Leeds suddenly started to dominate the English game, accruing honours in the modern era to a degree and after a fashion hitherto unknown elsewhere.

The period after Revie has been comparatively barren – and yet the Whites have still been far more successful in those forty years than any Yorkshire “rival”. The fact of the matter is that, in the post-war period from 1946 onwards, and allowing for a 15 year wait for Revie to turn up, it’s been Leeds first and the rest nowhere, all the way, barring one solitary League Cup success for the Wendies – the goal sweetly scored against man u, almost inevitably, by a Leeds United product in John Sheridan.

For Sheffield Wednesday’s tangible rewards, apart from that single League Cup, you have to go way, way back. Not since 1935 has the FA Cup come to Sheffield. The two triumphs before that were in the pre-Wembley era, when the likes of Bury were winning FA Cups (and when Leeds United didn’t even exist). In those days, Sheffield Wednesday were simply “The Wednesday“, and they were a power back in the 20th century’s “Noughties”. They won two league titles, and added two more at the end of the 1920s. Their last honour before the ’91 League Cup was that mid-thirties FA Cup win against West Bromwich Albion. And then – nothing, until Shez popped up with the winner at modern-day Wembley against man u – the year before Leeds United became the Football League’s Last Champions.

Comparisons between eras are rarely helpful and often invidious – they’re mainly useful for disproving old-wives’ tales or, come to that, young Wendies’ tales. There can be no doubt at all that, in the years and decades since the bulk of the Sheffield honours were won, Football as a whole moved on massively; it became far more competitive and professional, broadened its scope to include European competition as standard and widened its appeal as the number one sport in the entire world. It goes without saying that Sheffield Wednesday have never won a European honour – but, significantly they’ve won only one trophy since the advent of colour TV, and their next most recent success came when George the Fifth was on the throne and a certain Herr Hitler was flexing his muscles for his own forthcoming European campaigns. Leeds prospered and dominated in a ruthless era that would see the strolling performers of the early 20th century melt like wax figures in a furnace.

For the question of who the world regards as Yorkshire’s number one – well, that isn’t even a question, really. In the eyes of the world, Yorkshire football is Leeds United first and foremost, plus sundry other outfits who tend to blur anonymously into each other. It’s certainly true to say that Wednesday would be the only even halfway meaningful rivals – Huddersfield Town have done nothing outside of the 1920s, and the rest are an embarrassment, a motley collection of failure and woe.

But even Wednesday, with their comparatively honour-laden (if ancient) history, cannot possibly hold a candle to Leeds United. Wendies rail angrily against this self-evident fact; they will produce any old trophy they can dig up in support of their hopeless position – The Late Victorian Garland for Services to Hacking and Scrimmaging, perhaps – or the Pathé News Cockerel Award for Monochrome Achievements of the Thirties. But the modern supremacy of Leeds United eclipses any or all of that, together with anything more genuine, with effortless ease.

The brutal fact of the matter is that anyone who can now remember Wednesday as Champions is currently looking down the barrel of their 100th birthday and a telegram from the Queen. The Owls have simply not been successful enough in the modern era to be compared favourably with a club in Leeds who have not only won the lot, but won it within the lifetime of one of its foremost fans (that’s me, folks). Wednesday have a proud history, and their fans rightly take pride in the very venerability of that history. But more recent arid failure denies them the right to be held as successful, or even that big. Big clubs win League Titles, and the Wendies haven’t done that since Ena Sharples was a lass.

Delusions aren’t necessarily bad things. They can comfort the insecure and bolster those who need to be bolstered. But they’re there to be shot down too, especially when the deluded are crowing that bit too busily over their false pretensions to size, success and status in England’s finest county. Those honours rightfully belong to Leeds United, as is widely and correctly acknowledged around the world – and this piece is simply here to set that record straight.

So – there is no doubt at all that Leeds United rule Yorkshire football still, as they have done now for well over half a century. It’s a bitter and unwelcome truth for the Wendies – but they really do need to suck it up.