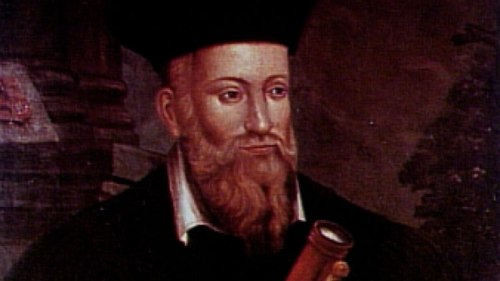 The post-match press conference for Brighton & Hove Albion‘s 2-0 victory over an “off the pace” Leeds United was enlivened by the unexpected and unscheduled appearance, from beyond the grave, of Nostradamus.

The 16th century French prophet, whose ancient prediction that Steve Morison would score in a Leeds win against Brighton had received some publicity this week, appeared out of thin air, looking slightly sheepish, but otherwise in pretty good form for a man dead these many years. This was, in fact, the first interview Nostradamus has granted since his death in 1566, and he was keen to emphasise that things had changed for him in the almost five centuries since then.

Speaking before the Brighton and Leeds coaches gave their post-match reaction, Nostradamus got straight to the point. “Yeah, man – I know I’m gonna get hammered for that Morison thing. It was a bad day at the office, a real bitch of a day, really. But you gotta remember that quatrain was written something over 450 years ago, well before League football had even started. You gotta cut me some slack, man. None of us is perfect, not even Don.”

So, now that he’s broken his 449 year silence, will he be maintaining an interest in the game?

“Hell, yeah man – I’m not that dead! I’m a big football fan and I have been since the 1870s. There’s quite a few of us up there, and we have some pretty lively discussions, let me tell you. I’m an Arsenal fan myself, big French influence there, which is pretty freakin’ cool.”

We can expect more predictions, then? Nostradamus was slightly more cautious on that score.

“Weeeell – it’s not impossible, let’s put it like that. It’s difficult to know how to go about it after all this time. You may have noticed, I’ve kinda left the mediaeval French vibe behind – too inaccessible, man. Since I’ve been up there, I’ve had the chance to talk to people like Warhol, Lennon, Oscar Wilde – he’s quite the Brighton fan, actually, so he’ll be tickled pink tonight.”

Many Leeds fans in the football afterlife fraternity?

“For sure. A lot of the real individual types, the movers and the shakers, they tend to be Leeds. They’re proud to be different and not to take the easy path. So, you’ve got the likes of Thomas More and a lot of those mediaeval martyr guys. Then there’s Lord Nelson – NOT a Pompey fan as you’d think. Einstein, he’s Leeds, there’s Archimedes, Galileo, guys like that. There’s even – well let’s just say someone who was really big a coupla millennia back. He asked me not to mention his name, though, reckons he’d get crucified in the press. And General George Custer, he’s a massive fan – but then he always did tend to be up against it and he certainly fancied the odds against him.”

Any Man U fans? There’s a lot of speculation over who they have following them…

“Nope, you never see any of them. I don’t wanna be too specific, but those guys ended up, y’know, elsewhere.”

So is Nostradamus at all embarrassed at the failure of his Steve Morison prediction?

“Noooooo, not really. As I said, it was a long time ago. I don’t even do the old-style quatrains any more, couldn’t tell you myself what they mean these days. It may even be that the Life, Leeds United, the Universe & Everything guy misinterpreted it. I am sorry if I raised the fans’ hopes though. That really sucks, and you can believe me when I say I regret it. All I can tell you as of now is that Morison will score, and sooner rather than later. Just, y’know, watch this space, man.”

At this point the coaching staff from the two clubs came into the Press room and Nostradamus felt it was time to go. With a cheery wink and a very passable Leeds salute, he promptly de-materialised – having agreed to deliver our best wishes to the LUFC faction in the great beyond.

Leeds next game is another tricky one, at home to Watford. At this stage, no predictions are available – from this world or the next.

Will Boro’ Bore Draw End the Era of Austerity at Leeds? – by Rob Atkinson 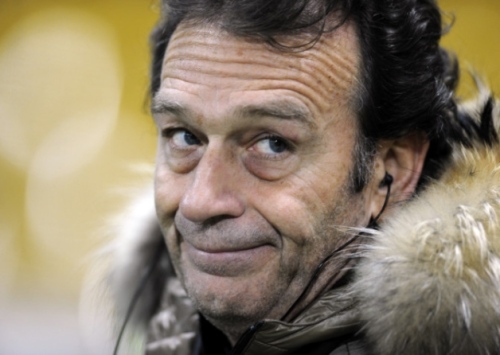 If Massimo Cellino is indeed confirmed as the new owner of Leeds United sometime next week – and social media comment from his son seems to indicate that Monday might be a significant day – then it is somehow appropriate that over a decade of bleak poverty and tightly-knotted purse-strings should be brought to a close by such a mess of a match as we saw on Saturday lunchtime at Middlesbrough’s Meccano stadium.

In financial terms, the poverty of ambition Leeds displayed in this frustrating encounter – together with a complete lack of composure and, in some cases, ability – was an apt summation of the years of penury and deprivation we’ve all suffered since dropping off our Premier League perch in 2004. 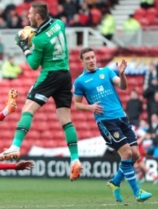 On the other hand, should you wish a theatrical metaphor, this match ranged from slapstick comedy to low farce as two inept attacks somehow failed to breach two dodgy defences.  Comedy and farce could have morphed into tragedy if debutant United keeper Jack Butland had been cruelly denied the clean sheet his immaculate display most definitely deserved.  Butland averted that tragedy by his own efforts.  Commanding and assured, he gathered high balls, pulled off one spectacular save in the first half and one brave Schmeichel-like block in the second.  He also found time to prevent a Warnock own-goal and, in general, he was man of the match by several country miles.

In truth, it was a match that defied any attempt to sit back and watch your favourite team playing your favourite sport.  Although the result could have been worse, the experience was about as enjoyable as having wisdom teeth extracted without benefit of novocaine.  It was a game to anger any fan who has invested faith and money in supporting Leeds United.

All was frenzy, everything was done in such unseemly haste and there was a distinct lack of any apparent ability to pass to a man in the same colour shirt.  It was annoying, it was depressing – God alone knows what Cellino & Son must have thought.  Major surgery is needed to transform this squad into one which might challenge next year.  If only the heroic Jack Butland could be part of that recruitment programme.  But, surely – even Mark Hughes can’t be that daft?

If this appalling game does prove to be the last before our shady Italian is at last approved by the League, then it’s a suitably low note to end a very low period in the history of Leeds United.  But any new era is, at least initially, likely to bring us more of the same.  Next week’s opponents, QPR, are highly unlikely to be as forgiving of our defensive shambles as shot-shy Boro were, and the Sky cameras a week on might well witness a bit of a battering for our heroes. But, with Leeds, you just never know.  And after all, Rome wasn’t built in a day, as the Cellinos could no doubt confirm.

Surely, today’s game was confirmation, if any were needed, that this season is a dead duck for Leeds.  We’d have to pull off a miraculous run to go into the play-offs – and even then there’s that pesky fundamental law of creation that dictates we just don’t do play-offs, so it’s perhaps just as well not to even think about it.  And we’d have to suffer a disaster of X-Factor proportions to fall into any real relegation danger – surely there are enough truly awful teams down there to ensure at least our safety for participation in next season’s Championship campaign.

No, this season now is all about doing the best we can on the pitch while more important matters are being sorted out off it.  What measures will be taken, what changes might be made – that’s anybody’s guess.  You have to assume that Cellino is itching to engage with the club and start putting his stamp on the whole place.  Whatever dull and depressing football the remaining matches might have in store for us, the events behind the scenes, at least, promise more entertainment than we’ve had for a good long while.

Meanwhile, I’m glad to say I’m helping a mate celebrate his birthday this evening and, in the course of that celebration, I intend to drink enough to forget all about the events today in Smogland.  With my luck, though, I’ll have a great time tonight but then have nightmares about next week’s likely drubbing in Shepherd’s Bush.

It’s a hard life being a Leeds fan.  But maybe not for too much longer… 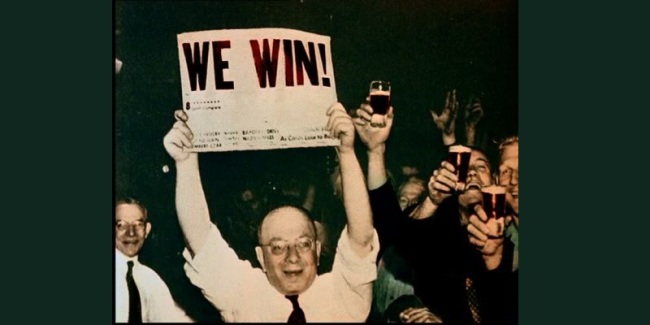 Sometimes a hard-earned result after a run of defeats can do the trick, reinvigorate a team, instil confidence and set them on a much more positive run.  Sometimes.  There must be some doubt as to whether this struggle to beat a Bournemouth team reduced to 10 men after only just over half an hour will do that trick, inspiration-wise.  The initial lift provided by Cherries goalkeeper Ryan Allsop’s dismissal for a professional foul was immediately negated when Ross McCormack missed the resultant penalty, sub keeper Darryl Flahavan saving the Scot’s weakish effort.  That “here we go again” gloom descended on Elland Road and the two teams headed in at half time level.

The second half was better in a way it couldn’t really help but be after the disappointment of the first.  The usual procession of half-chances and fluffed shots had in the end come to a familiar outcome: no goals for Leeds.  The deadlock though was broken when Bournemouth’s depleted side finally cracked as McCormack got onto the end of a Stephen Warnock low pass to sweep the ball past Flahavan from close range.  Leeds had been somewhat more effective since the Cherries had been reduced to ten, and the feeling was that they could now go on to capitalise.

Typically though, it would not be that simple.  Another set-piece to defend on 73 minutes, another awful mix-up at the back for Leeds as Eunan O’Kane headed on for Lewis Grabban to equalise. 1-1 and Leeds were threatening to throw away at least two points. That impression was reinforced when Flahavan then produced a one-handed save to deny Rudy Austin, but after 80 minutes of embarrassingly tense struggle, former Bournemouth defender Jason Pearce managed to knock the ball down for sub Dom Poleon to lash in the winner.

It was the kind of game that could so easily have proved a disaster for Leeds, even at this early stage of the season.  The psychological import of failing to win against ten men, on the end of such a dismal run too, was too horrible to contemplate. As it was, United prevailed and they can draw a line under this performance and move on.  Things will need to be a lot better against Derby at the weekend if the Whites are to build on this less than convincing win.