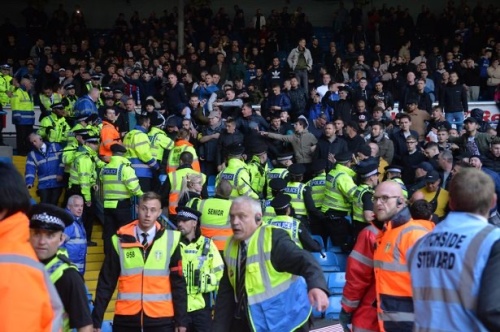 On the field, this clash of Whites and Blues eventually went the way you might expect, with Leeds United edging out Birmingham City 1-0, thanks to a second half goal from home town boy Kalvin Phillips.

So much for that sideshow. The real business of the day, for a section of the visiting support anyway, was to respond to the party atmosphere surrounding Leeds United’s centenary celebrations in their own inimitable way. For these are the Birmingham City “Zulus“, legends in their own minds, always ready to prove their essential masculinity and courage by beating up target individuals carefully selected for being unlikely to hit back.

The spoils of battle on this occasion were claimed by the Zulus as, drunk on testosterone and utterly fearless when confronted by a woman in a high-vis jacket, they counted coup on a Leeds United lady steward. Never mind the fact that their team lost, never mind that at all. These boys showed their own take on pride and passion in bravely overcoming a formidably female foe.

Not much more needs to be said. With the shenanigans in Bulgaria preceding yesterday’s Zulu campaign, it’s been a significant week for those of a racist turn of “mind” and for courageous mobs motivated by a desire to pick on the most vulnerable target at hand. What a triumph this was for those Zulus. How proud of them their mothers must be. Revel in it, lads. You really are quite unique.