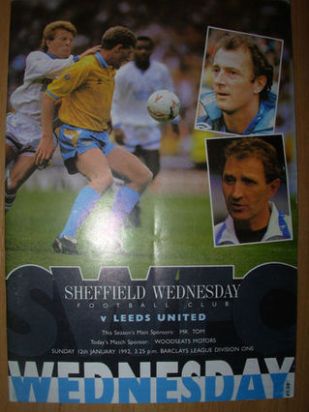 As 1991 turned into 1992, the two-horse English Title race was hotting up.  Man U had suffered a shocking reverse on New Year’s Day, capitulating 4-1 at home to QPR, and then later that January 1st, Leeds had won competently 3-1 at West Ham to remain well in the race for the ultimate domestic honour.  The scene was adequately set, then, for Wilko’s first return to Wednesday since he had quit Hillsborough to become Leeds boss in 1988.  This would also be Lee Chapman’s last game before his season-threatening FA Cup injury, which resulted in the drafting in of one Eric Cantona – with all the long term consequences that would entail.  But Chappy was destined to be sidelined only temporarily, and he went out in the most emphatic style.

There was a crowd of 32228 at Hillsborough, the usual vociferous contingent of travelling Leeds fans rivalling the home crowd for noise from the outset, and completely drowning them as the game went on.  Leeds United were weakened, so it seemed, by the absence of the injured Gordon Strachan and suspended David Batty, half of their legendary midfield Fantastic Four.  Any side, surely, would miss performers of such calibre.  Leeds, though, seemed determined to make light of the problem, and tore into their hosts from the start.  Full-back Tony Dorigo made an early darting run, cutting in from the left and making good progress down the centre of the pitch, before unleashing a right-foot thunderbolt that Wednesday ‘keeper Chris Woods had to tip over.  From the resulting Gary MacAllister corner, Chris Fairclough rose to head downwards, and found Chapman in splendid isolation four yards out; his finish swift and deadly for 1-0.

For a local derby, the contest had been decidedly one-way traffic – Chapman was to send two towering headers just wide before Carl Shutt had a scuffed shot smothered by Woods in the home goal.  Then, a true champagne moment as Mel Sterland fed the ball to Chapman on the right.  In a completely untypical burst of pace and control, Chappy surged between two hapless Wednesday defenders, raced into the area, and unleashed a shot that beat Woods completely, just clipping the frame of the goal to rapturous applause from the Leeds fans at the Leppings Lane End.  I remember thinking at the time that anything was possible now, if Lee Chapman could do something so utterly out of character.  And so it proved as, from a free kick awarded just right of centre some ten yards outside the box, Dorigo stepped up to absolutely hammer a left foot drive past the helpless Woods.  Cue mayhem and cavortings as the Leeds hordes behind the goal, celebrated as clean a strike as you could ever wish to see, the ball a blur as it arrowed into the far corner with deadly precision and power.

At 2-0 down, the home side were making increasingly desperate attempts to gain some sort of foothold in the match.  This desperation was adequately demonstrated when, from a harmless-looking ball into the Leeds area, Wednesday striker Gordon Watson ran in front of Chris Whyte, continued on for another step or two, and then hurled himself into the air, landing in agonised paroxysms of simulation between a bemused Whyte and Leeds ‘keeper John Lukic.  Such obvious fraud and villainy could have only one outcome, and the stadium held its collective breath for sentence to be passed on the miscreant.  Instead – amazingly – referee Philip Don pointed to the spot.  Whether none of the officials had seen the extent of Watson’s ham-acting, or whether they were moved by sympathy for the mauling Wednesday were taking from a rampant Leeds, it’s impossible to tell.  The outcome was the same either way.  Ex-Leeds hero John Sheridan stepped up, saw his penalty brilliantly saved as Lukic tipped it against his right-hand post, and then gleefully belted home the rebound to give Wednesday a massively unmerited lifeline.

This act of base and scurvy treachery required nothing less than a riposte of the utmost nobility and beauty, so we said to ourselves, though probably in more Anglo-Saxon terms.  And, happily, that’s just what came to pass.  Only six minutes after the home side’s ridiculous blagging of a comically unfair route back into the game, Leeds took effortless control again with a goal sublime in both its conception and execution.  Lukic bowled the ball out to Dorigo on the left flank; he sent it first time down the line to Gary Speed, who took one steadying touch before sending a beautiful flighted cross into the Wednesday area.  And there, inevitably, was Chapman, horizontal in mid-air, neck cocked to hammer the ball unanswerably past Woods, the perfect counterpunch to Watson’s knavish low blow.  It was a gorgeous goal, sweeping the length of the left side, taking the entire home team right out of the game, and re-establishing the two goal margin which was the least Leeds United deserved at half-time.

The second half that ensued was simply a story of how a blood-and-thunder Yorkshire derby turned into a stroll in the park for Leeds United.  It seemed as if all the life had been sucked out of the home team – a Wednesday side who, let’s not forget, were unbeaten at home since the opening day of the season, and who would go on to finish third in the table.  So they were no mugs, but Leeds United were absolutely irresistible on the day, and would have hammered far better teams than the hapless, bewildered Owls.

It’s possible that Wednesday were simply embarrassed about that cringe-worthy penalty, possibly they were dog-tired, having been run ragged since the start.  Whatever the case, their heads dropped steadily further and further as the game progressed, and they offered little resistance as Leeds proceeded to throttle the life out of them.  Chapman completed his hat-trick five minutes after the hour, heading in after Speed had struck the bar from a corner.  Poor Speedo was looking the other way, bemoaning his bad luck when the ball hit the back of the net after all, turning his frustration to joy.  Then, perennial bit-part player Mike Whitlow ventured forward, just because he could, and rose unchallenged to meet Rod Wallace’s right-wing cross and head easily over a stranded Woods.  It was left to little Wallace to administer the coup de grâce, striding clear after a shimmering exchange of passes in midfield to dink the ball over the advancing ‘keeper, and put the suffering home side finally out of their misery.

For Leeds, it had been their biggest away win in over 60 years as they returned to the First Division summit in the best possible manner – they got six, but they really could have had ten or a dozen.  The message had been sent out loud and clear to the watching millions in Live TV Land: United were deadly serious about their Championship challenge.  They would surely look back though after their eventual Title success, and identify this sumptuous display as one that defined them as potentially the best team in the land.  For Wednesday, it was total humiliation and – truth to tell – very difficult to sympathise.  Better by far to lose 6-0 than to be tainted as they were by such a crass and obvious example of cheating – and it hardly reflected much credit on the match officials, either.  But the cheats on this occasion failed utterly to prosper.

It was a massively impressive performance, a hugely significant victory, and the sweetest possible return for United’s ex-Owls contingent.  Mel Sterland always took great delight in beating the Blades, but this victory over his boyhood favourites would have only happy memories for him, as indeed for Chapman, Shutt and of course the triumphantly-returning prodigal Sergeant himself.  Leeds would march on to the Title, finishing four points clear with the most wins and least defeats, unarguably deserving Champions (although the usual suspects argued anyway).  Man U’s quarter-of-a-century wait for a Title would extend for another twelve delightful months before Mr. Murdoch ushered in an era of success for them, aided by our own enfant terrible.  And Sheffield Wednesday?  They would recover to finish impressively, despite another awful trouncing at deposed Champions Arsenal.

1991-92 was a season of nip-and-tuck, with titanic struggles in both Cup competitions adding spice to the League fare as the battle for honours raged on three fronts.  But there can be no doubt whatsoever that January 12th 1992 belonged entirely to Leeds United, who looked like Champions a full four months early with this five star, six of the best Masterclass display crowning them as Yorkshire’s finest – just as we, and indeed the Wednesday fans in their heart of hearts, had always known.

Next:  Memory Match No. 3:  Xmas Eve 1995 – Leeds United 3. Man U 1.  Join me again, for an early start to Christmas, a classic Yeboah finish, Brolin’s finest hour and an actual penalty against “Them, From There”.