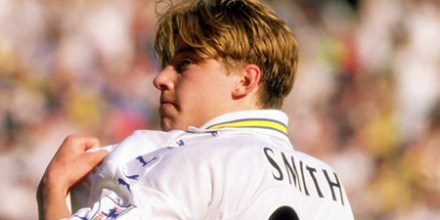 Smudger – one of our own?

It’s over nine years now since Alan Smith, the Rothwell lad with Leeds United in his DNA (although there are rumours that he was a Liverpool fan as a cherubic little boy), broke with an on-the-record vow and signed for Them.  From THERE.  It was impossible to believe, but it was true.  Smudger had sold his soul to the Devil.  Our Alan was a scummer.

Ever since then, the debate has raged off and on.  Is Smithy more sinned against than sinning?  What were his choices back in 2004?  Is he still our golden boy, famous for scoring with his first touch in front of the Anfield Kop, for putting Anderlecht’s formidable home record to the sword, for that Cruyff turn when he scored against Southampton at home?  Or is he the living embodiment of Judas Iscariot, selling himself and prostituting his talent for a few (million) pieces of silver?

There is evidence on both sides of the argument, and plenty of ill-informed, scurrilous comment as well.   No less an impeccable source than Peter Lorimer tells us that Smudge had little choice in the matter; that Man U was the only offer on the table that suited our dire financial predicament; that the lad even waived a rather large payment so that the Club could gain maximum advantage from the deal.  My own crib at the time was a TV interview immediately after relegation when Smith confirmed he’d be leaving as he was “not a first division player”.  Well excuse me, son – I brooded – but you are.  You’ve just earned that status by being part of a team that got relegated.  But it was all a long time ago.

So I thought I’d ask people to vote for how they see our former striker (38 goals in 172 appearances).  Is he a goodie or a baddie?  Saint or Sinner?  Is he Leeds, or is he not? Please give your view below.  We might as well do this now; the lad is way past his best and let’s face it – after all the years of rumours and sightings – he’s not coming back.  So let’s nail this one now.

Comments are equally welcome.  If you MUST insist on a democratic right to vote, even if you’re a Man U fan – then at least have the decency to admit it.  I could of course protect the integrity of the process by filtering out I.P. addresses in Devon – but what the hell.

17 responses to “Alan Smith: Saint or Sinner? The Smudger Debate – by Rob Atkinson”