It’s a BOGOFF deal on ‘Life, Leeds United, the Universe & Everything‘ today.  Two birthdays for the price of one – and as the price is nowt, you’re doing pretty nicely, aren’t you?

First up, we have Frank Worthington, one of the maverick superstars of the Seventies and briefly a cult figure in LS11. Frank picks up his pension book today, attaining the age of 65 years.  He already had a terrific career behind him by the time he rolled up for a short but spectacular stay at Elland Road, initially with a rescue mission in mind.  Spells with Huddersfield, Leicester, Bolton and Birmingham may not have put any undue strain on the Worthington medal cabinet, but he had a reputation as a fine footballer, for whom the term “flamboyant” could easily have been coined – and as a deadly striker.  Missing out on a move to then-mighty Liverpool was an undoubted low-point in his footballing life – his medical had revealed high blood pressure – but it was still a long and varied career, with eight England caps and two goals for his country along the way – not bad for a flair player in an era of pragmatism.

The deal that brought Worthington to Elland Road was a straight swap, with the late Byron Stevenson heading the other way to Birmingham City. At Leeds, Frank came into a team suffering a prolonged goal-scoring drought which had dragged them deep into the relegation mire. Worthington immediately set about putting that right, scoring the winner at Sunderland and going on to notch a total of 15 goals in 35 appearances for Leeds.  Especially memorable was his contribution to a stunning 4-1 win at Aston Villa, who were only a matter of weeks from becoming European Champions.  Sadly, the team just wasn’t able to string enough results together to save United, who were relegated to Division Two despite the best efforts and goal-scoring feats of Mr Worthington.

Frank started the following season still in the white shirt, and scored a memorable double as Leeds won 3-2 at Sheffield Wednesday.  Soon, however, he was on his way for £50,000 to Sunderland and he went on to appear for pretty much every other club in the league after that, retiring eventually in his early forties – pretty good for a man with a “blood pressure problem”.  Many Happy Returns, Frank – and thanks for the memories. 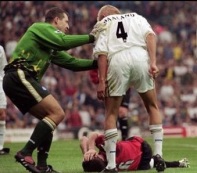 Get up Keane, you big girl

Another Elland Road cult star was Alf-Inge Haaland, a man whose terrific relationship with the fans survived his unfortunate lapse in returning with Man City and scoring a purler of a goal against us.  Alfie was one of those rare players who really “got” what playing for Leeds United was all about.  A passionate performer, he related to the crowd as few others before or since, picking up on their likes and hates and going with the flow of commitment and fight for the shirt.  This was epitomised in his attitude towards Man U – he made no bones of the fact that he disliked the club and their players.  This was particularly the case as regards Roy Keane – a man regularly and inexplicably bigged-up to this day by a fawning media, in the shape of cushion-faced anchorman Adrian Chiles, as a “hard man”. Haaland seemed to view Keane as a coward, claiming that the Irishman didn’t dare look him in the eye.  The nature of Keane’s eventual retribution would seem to bear this out.

In an incident during the United v Man U game at Elland Road in 1997, Keane injured himself attempting to foul Haaland from behind, rupturing his anterior cruciate ligament, an injury which put Keane out of the game for almost a year.  Famously, Haaland had stood over the prone Royston, accusing him of feigning injury so as to avoid being punished for the foul.  Harsh, but funny.  Keane was booked as he left the field on a stretcher, Man U lost 1-0, and a grudge was sparked that would last over three years for payback.  In April 2001, Haaland – by now a Man City player – was fouled by Keane in the local derby, the Irishman going over the ball to stamp on Haaland’s right knee.  Keane was initially punished lightly, but later admitted in his typically over-the-top autobiography that the foul had been a pre-meditated act of revenge.  It was in character for Keane to plan his long-delayed retaliation so as not to risk being hit back; one of his other famous fouls was an elbow to the head of notoriously non-tough little Jason McAteer, when Keane snuck up from behind to launch his assault unseen before running away.

Alfie Haaland, 41 today, is remembered by fans of Nottingham Forest, Leeds United and Man City as the type of player every team needs, one who will give his all and never give up, a professional footballer who comes as close as any to thinking and caring like a fan. For Leeds fans, Alfie’s oft-expressed antipathy towards Man U is enough to guarantee that he remains loved at Elland Road, though he can be magnanimous too.  He bears no grudge regarding Keane’s act of thuggish cowardice, expressing the hope that by now the Irish assistant manager will have grown up enough to set a better example to the players in his charge.  Many happy returns, Alfie.

Both Frank Worthington and Alf-Inge Haaland contributed in their different ways to widely-differing eras at Leeds United, and both are fondly remembered to this day.  Let’s raise a glass to both of them, two great servants who are both a year older today.  Cheers, lads!