Reports coming from out of Italy tonight, notably in the La Gazzetta dello Sport and the Corriere dello Sport, strongly indicate that Leeds United AFC has been taken over by Cagliari president Massimo Cellino. Both papers claim the deal for the Championship club is essentially complete, although news outlets in the UK are being somewhat more cautious.

Nothing has been heard from Leeds United FC so far, nor from GFH or David Haigh himself. Doubtless more news and reaction will follow tomorrow.  There have been suggestions that Cellino would not find it a straightforward matter to pass the “fit and proper person” test – but at a club for whom Ken Bates was deemed fit and proper, nothing is impossible.

Meanwhile, reports that David Haigh woke up this morning to find a horse’s head in bed next to him are reckoned to be exaggerated.

Drip, Drip, Drip as the Water Torture Goes On for Leeds Fans – by Rob Atkinson 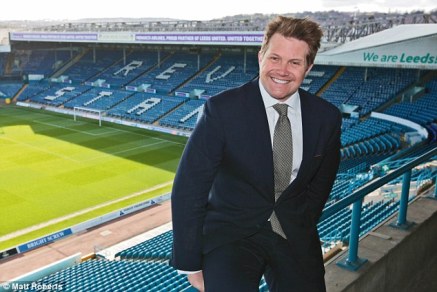 This blog has posed the question in the recent past: what exactly is holding up the latest Leeds United takeover?  But however earnest that enquiry was, I did think that by now there would have been some clarity, some answers – maybe even some of the oft-foretold good news after the dotting of i’s and the crossing of t’s. And then, we could move swiftly in the transfer market with still almost two weeks to go – and perhaps resurrect what is turning into another season of crushing disappointment.

But no. Instead of things getting better, they appear to be on the point of becoming worse.  Instead of some welcome clarity, all is obscured confusion, with rumour and counter-rumour flying about like lost souls in some Leeds fans’ purgatory.  After everything else that has gone on since our last real high point – promotion from League One in 2010 – this drawn-out continuation of unresolved anguish and uncertainty seems almost calculated to cause the maximum stress to anyone out here who loves the club, exposing us to ridicule after we’ve been heard to express optimism in the wake of this or that promise or optimistic smiley tweet from one or other of our prospective owners.

It wouldn’t be so bad if some of this incessant to-ing and fro-ing wasn’t avoidable.  If, for instance, we were just dealing with the inevitable complexities of due process that go along with any major deal, we could perhaps smile bravely and deal with it.  But it’s the coy little hints, the periodical hints and promises that elevate the situation from the mundane level of irritation and disappointment to a needless peak of exquisite cruelty.  Did we really need the Red Bull comments to tantalise is?  Do we really need to know about morning coffee with a billionaire if coffee is all it turns out to be??

Now we are getting indications that the whole thing might be about to collapse, having been previously assured that it would all be done early this window and that, in any event, any delay in completion would not hamper Brian in the transfer market.  And there’s the old refrain striking up again: “business is difficult to do in January”.  That, and the new doubts about the takeover endgame are vying with each other as to which negative piece of information can best sicken and dismay the loyal fans out here, waiting for something good to happen.

It seems likely now that this will drag on, until another transfer window has been safely negotiated with no inconveniently expensive signings, just a couple of loans.  Once again, the suits will be able to heave a sigh of relief.  The most significant announcements from the club lately have been of a sale in the club shops of cut price winter woollies.  Ring-a-ding ding.

It’s difficult sometimes to say – which is the worst aspect of this situation?  Supporting a club that has no apparent ambition to compete with the other clubs in the same division, smaller clubs that are forever out-stripping us in investment and the will to win?  Or being made mugs of time and time again?  Leeds United do not even appear to bother finding new excuses; refinements of the same old ones we’ve all heard before will apparently do, as far as they are concerned.  It’s enough to make the most loyal of fans angry.  I’m loyal, I have Leeds United engraved on my heart – but I’m spitting feathers at what the fans are being expected to put up with.

It’s time some for definitive statement to be made.  Clauses requiring discretion and confidentiality are all well and good, but they don’t address the morale of the fans, and they do nothing to ease the growing unrest and annoyance out here.  Players and staff come and go, even the stadium isn’t forever.  But the fans as a body are the continuous thread running through the history of the club.  We ARE Leeds United – so show us due respect and sort this embarrassing mess out – or at least treat us like adults, end this maddening drip, drip, drip water torture situation – and tell us what’s what.

That’s surely not too much to ask for, is it?