Proud to be a Leeds Fan, Marching On Together – by Rob Atkinson 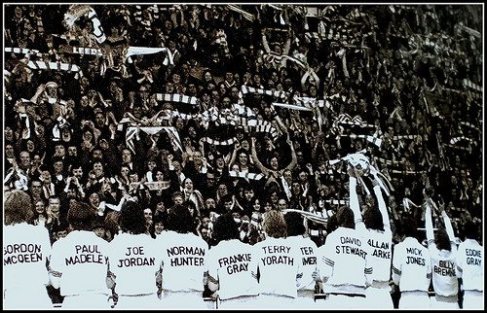 Sometimes it’s really tough to be a Leeds fan.  Today is a good example when – despite a much-improved performance against Leicester City and some regained pride, it’s still the case that we’ve lost again.  Cue the mickey-takers from lesser clubs, delighted at our discomfiture, parading their lack of class by airing all the tired old jibes we’ve all heard and got sick of long ago.  It’s all part of the Leeds-supporting experience, the perennial fact that there’s a lot of idiots out there who hate us, without really knowing why.  It’s also how we distinguish ourselves from the mundane pack of everyday clubs – if you hate Leeds United, have a go.  And they do their poor best – but it’s usually distressingly feeble stuff, as witness today’s collection of social media misfits retailing their horribly unfunny shafts of “wit”.  We just have to put up with it and move on, serene in the knowledge that We Are Leeds.  I’ve been Leeds for most of my life – never really had any choice about it.  And for this, I give thanks daily.

Leeds United was just something that happened to me on the way to adulthood. By an accident of birth and timing, I found myself living 13 miles away from LS11 and the greatest club side in Europe (see above), just around the time I became seriously interested in football.  I’d misguidedly spent my pre-teenage years with my nose stuck in a succession of classic Sci-Fi novels, so the Glory Years mostly passed me by.  My Dad had been a life-long supporter though, and everyone at school was Leeds apart from the odd much-bullied Man U fan – so it was impossible not to go with the flow, and once I’d been introduced to that Elland Road experience, I was hooked for life.  The timing was particularly unfortunate however.  Unlike my golden-boy git of a brother, who’d waxed smug on the successes of the late 60s and early 70s, I started going to the match in the first post-Revie season, and my time supporting Leeds has been one of a long and heartbreaking decline, punctuated by the brief joy of the Wilko reign, and to a lesser extent, that of O’Leary.  So it’s been tough.  But it could have been so much worse.

I could, for instance, have been a Newcastle fan.  Imagine that.  My Dad is 86 now, bless him. Newcastle’s last title was won in the year he was born, 1927.  Alfred Hitchcock released his first film that year.  Communists were fighting bloody street battles with Nazis in Berlin. Charles Lindbergh became the first man to fly solo across the Atlantic.  In brief, it’s a long, long time for an allegedly big club to go without a League Title. Newcastle fans are famous for their blind devotion to “the Toon”, and it’s hard to imagine such fanaticism being so little rewarded over such a long period – although I do recall a crowd of 7,000 at St James Park after one of their frequent relegations had been confirmed.  It’s now the best part of fifty years since they won anything at all, and yet still the love affair goes on, fueled largely, it must be said, by a pathological hatred of near neighbours Sunderland.  Thousands of Newcastle fans know nothing but failure and empty-handed season upon season.  How awful must that be.  Still, they’re the biggest club in the North-East – which is a bit like being the tallest mountain in Holland.  At least Leeds fans have the history and knowledge of success, so that our expectations, whilst unrealistic, at least remain alive and kicking.  Newcastle’s are long, long dead.

Or I could have been a Celtic fan.  God – even worse.  Sure, they’ve won loads of trophies, but with one sparkling exception those have been gathered in the face of opposition that would shame the English second tier.  At best, they’ve usually come first or second in a two horse race, and now even that other horse has gone lame, as Rangers tread a perilous path back from financial ruin via the muck and nettles of Scottish lower leagues.  Celtic did of course become the first British club to win the European Cup in 1967 – and they did it, what’s more, with a team of local lads under the legendary Jock Stein.  But that one fantastic achievement is poor reward for having to witness year upon year of procession football as Celtic trudged on, one of two out-of-place whales in a tiny fishpond.  Who would be a Celtic fan now?  It’s not sport up there, it’s lambs to the slaughter with about as much entertainment value as watching Farsley Celtic reserves on a wet November night.  Scottish football remains a laughing-stock, and Celtic must take much of the blame for that with their perennial failure to make a mark on the continent, despite routine Champions League qualification.

At the end of the day, I wouldn’t change a thing about my years of supporting Leeds.  We have the history, the fan-base (still), the notoriety as “The Damned United”, and little of the Sky-era false glitz and glamour of the current crop of Premier League pretenders. You still see Leeds fans wherever you might trot around the globe, and no-one could call those lads and lasses glory-hunters – but they do have the pride of an honour-laden history which is denied to all but the most feeble and elderly Newcastle fans – and Leeds fans also have the serene knowledge that the honours and the history have been won in the white heat of intense competition, not by near-default as those worthless baubles up in Scotland have been soullessly accrued.

Marching On Together.  We Are Leeds.  Thanks, Dad, for bringing me up to be Leeds, and for saving me from some pretty pallid alternatives.

Wounded Leeds to be Mauled by Foxes? – by Rob Atkinson

The Foxes are on the prowl in Leeds this weekend, looking for easy prey, slavering and snapping at the tell-tale scent of blood which betrays the presence of a wounded and defenceless beast – or at least of some hapless chickens come home to roost. The potential victim of choice is Leeds United, mortally savaged last weekend when a soft underbelly was ruthlessly exposed as they rolled over and surrendered at Hillsborough. Slinking away to lick their wounds, Leeds have spent the week since trying to marshall spent energies for a last-ditch defence of their territory, readying themselves for an attack from the top pack out there. Sadly, it promises to be an unequal battle.

But now we’ll leave behind us this already over-stretched “battle of nature” metaphor, before it gets too gory and messy for the requirements of good taste. We all know we’re up against it this weekend, and that if things go anywhere near as spectacularly wrong as they did in darkest Sheffield last week, it could be bloody carnage in LS11. And yet there is hope springing from out of the mists of time, and the one thing above all that any beleaguered team or manager needs is a little hope.

That historical glimmer of light shining wanly through the gloom takes us back to the last time we let in half a dozen at Wednesday. On that pre-Christmas 1995 occasion, having capitulated 6-2, Leeds were required to bounce back swiftly as Man U rolled into town seeking to take advantage of our reduced state. Well, we won 3-1 (see here) on that memorable Christmas Eve, with tomorrow’s opposition keeper’s dad in goal and with our strike-force serving us well, so who’s to say we can’t spring a comparable shock just over 18 years later? Alright, common-sense and the formbook are two that spring to mind, but let’s not abandon ALL hope – not just yet.

Whatever recent form or historical precedent might tell us, there’s little doubt that Leeds United are the underdogs this weekend – and perhaps, after failing against nominal inferiors last time out, this is just what they need. There is also the small matter of a change of leadership on the field – or, as some would bitterly point out, the introduction of some leadership, a quality notable by its absence in the last two craven performances.

Ross McCormack has long been identifiable as a man who carries the club in his heart and wears that heart on his sleeve. Striker or no, there can be no better candidate among the current crop for a captain’s role – and there may even be a bonus in the shape of a return to form for Rudy Austin, freed to concentrate simply on playing. If Austin could produce a performance comparable to his single-handed subduing of Birmingham City a while back, then all bets are off. Rudy was almost unplayable that day, as the rest of the team benefited from his industry and commitment. So the change of skipper could be a double-edged and beneficial sword – and we may look also for the galvanising effect of a “clear the air” meeting in the wake of humiliation.

A change of formation could also be on the cards, now that we have two wingers to (we hope) create havoc down both flanks. The downside to that is the loss of battering-ram Matt Smith, who is suspended after an appeal against his red card last week was, unsurprisingly to anyone who has followed United’s run-ins with authority, summarily dismissed. So Smith is out, and there is a vacancy in attack alongside Captain Ross if we ARE to go 4-4-2. Whispers are abroad that the mystery transfer target Brian McDermott was having a chat with today might just be a certain Argentinean who left us to become Becchio the Benchwarmer of Carrow Road – and that would certainly solve a problem or two, though it’s a little late in the day now for new blood to be available for the Leicester test.

There is, on the other hand, new blood in the Leicester City ranks – though that new blood is of the distinctly old variety as veteran Kevin Phillips arrives from Crystal Palace to threaten Leeds’ wobbly defence. It is this factor that worries me above all; Phillips is the kind of man who you suspect will make an instant impact, even if it’s off the bench. Elland Road before the TV cameras is a scenario made in heaven for the lethal finisher, and you wouldn’t bet against him harming our heroes at some point. Recent form is as good for Leicester as it is bad for Leeds, with the Foxes having slain the Rams last week, City beating Derby by a convincing four goals to one.

So, there are many reasons to worry about this home fixture – though we should bear in mind that we already have a point in the bag from Leicester in an early-season stalemate that we could even have won near the end. You suspect that all of a Whites persuasion would be happy to see another point tomorrow; it’s an outcome some optimistic urge in me is tempted to forecast. But taking everything into account, with a determined Son of Schmeichel in goal for the Foxes and prepared to throw himself at everything to avenge his dad’s defeat in that Christmas Eve win over Man U; with the X-Factor of Finisher Phillips in the mix and with all of the trauma currently surrounding Leeds United – I will reluctantly go for a routine away win as the Whites battle hard but are undone by a frankly better squad.

0-2 for me, a goal at some point for Old Man Kevin, fresh from the Palace – and some honour in defeat to be garnered from what I confidently expect to be a much-improved performance. Now come on, Leeds – you proved me wrong with last week’s result prediction. Get those sleeves rolled up, fight for the shirts and prove me wrong again!