A Leeds View of Barnsley’s Demise: Karma’s a Bitch – by Rob Atkinson 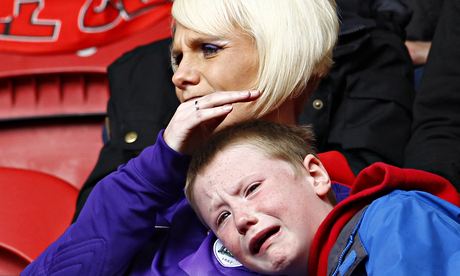 It’s true, then. What goes around really does come around – and Barnsley FC, whose primitive fans were so gleefully happy at the plight of Leeds United just a few weeks back, have now dropped into the lower league abyss which is their natural environment.  They can expect neither sympathy nor comfort from LS11 – the home of Leeds United who, just a few short weeks ago, had problems of their own that threatened to cast them ignominiously into administration and League One.  At that point, the internet rang with glee from the usual suspects, prominent among them the fans of that small club from the back streets of a former pit town in the Republic of South Yorkshire.

The Barnsley fans of my acquaintance were highly active on Facebook and the like, nudging each other in a virtual sense and snickering like excited schoolboys.  “Leeds are going into admin!” chortled one.  “Really?” spluttered his little friend. “Is that for definite?”  And so they went on, speculating about the level of the points deduction (15 at least, I reckon. Ooh no, I hope it’s 20.)  It was unedifying stuff, but sadly it’s exactly what you might have expected from a bunch of fans with such a large chip on their collective shoulder.  They “hate Leeds scum”, you see.  They couldn’t tell you why, though they might possibly remember something their dad once said about Billy Bremner or Norman Hunter.  Anyway, they were chuffed to bits at the thought of our misery and the crisis we were in, and they cavorted accordingly.

It was similar at the end of last season.  Back then, Barnsley were in relegation trouble again, come the last day of the season.  So were Huddersfield; and the two played each other, knowing that the loser would go down.  It ended up as a draw and results elsewhere saved both lesser Yorkshire clubs.  You might have expected celebration, maybe even mutual congratulation and some clog dancing in the cobbled streets with, perhaps, a spike in the troglodyte birth-rate nine months later.  But no – the sole thought in these yonners’ tiny minds was to join in with a combined chorus of Huddersfield and Barnsley as they regaled us with loud and tuneless anti-Leeds United songs.  They were bang to rights on a charge of hating us more than they loved their own dismal little clubs, even at the moment of their greatest triumph – because for Huddersfield and Barnsley, avoiding relegation from a sphere higher than their natural comfort zone is as good as it ever gets.

But now, a mere few weeks on from Leeds United’s nadir of crisis and despair, when those Toby Tykes were so happy and optimistic, things have changed and the pit boot is on the other foot.  Leeds United are safe – and apparently minted, with the potential to rebuild and ascend once more into the Promised Land. Meanwhile, Barnsley have gone, back into obscurity where they undeniably belong.  No more Cup Finals against Leeds United – they will have to settle for playing second fiddle to Sheffield’s junior club. They will face a new and bleaker financial reality as their already tiny crowds (except when Leeds came to town) dwindle even further.  Some gloomy and pessimistic “Tarn” fans are already predicting that it’ll take years to come back.  Let’s hope so.  Sentimental hypocrites aside, Barnsley will not be missed.

All their fans can do now is to prepare themselves for existence at a lower level, with fixtures against the likes of Rochdale, Scunny and perhaps York City. Those fans will still “hate Leeds scum”, but they will miss the brief taste of the big time that our visits provided, and they will yearn for the day that they might play us again.  From a Leeds United point of view, one less Cup Final Complex opponent will do us no harm next season – and it’s probable that we’ll have moved on up, long before Barnsley can hope to slither out of the lower league mire.  It’s all very satisfactory and enjoyable – and if that sounds cruel, then just cast your minds back to the fun the Tykes were having, quite recently, at our expense.

What goes around, comes around – and karma is indeed a bitch.  Suck it up, Barnsley fans.  You deserve it.

94 responses to “A Leeds View of Barnsley’s Demise: Karma’s a Bitch – by Rob Atkinson”