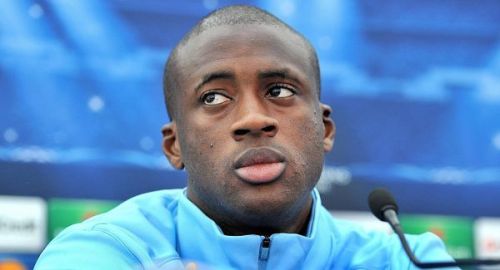 Touré in an incredible sulk

Desperate to deflect attention from talk of a sensational move for Ivory Coast midfielder Yaya Touré from Manchester City to Leeds United, the English champions have taken the unprecedented step of revealing proposed contract details to “Life, Leeds United, the Universe & Everything”.

In a move calculated to appease their traumatised star, Manchester City have drawn up a new contract for Yaya Touré. The midfield powerhouse had been “hurt” by the club’s failure to say “Happy Birthday” as he celebrated that milestone 31st year. Touré, it is said, was grievously offended by the lack of respect, cake and a bouncy castle to mark such an important anniversary.

Anxious to placate their iconic superstar the Champions have moved fast to put together a new package which should keep Touré at the Etihad until he grows up. Despite hints from the player’s agent, Dimitri “Meerkat” Seluk, that his client might pout, cry and storm out of City, slamming the door, the club itself is guardedly optimistic that the new deal will be a tantrum-breaker.

The details of the proposed 4 year agreement are as follows:

The new contract will remain on the table for the time being, as Yaya is off out to play with his mates in Brazil.  In the period before the contract is signed, all parties accept that Yaya will continue his present sulk, and that he will be pampered and cajoled as required until he is ready to be a good boy and sign on the dotted line.

Yaya Touré is 31 years and one week old.