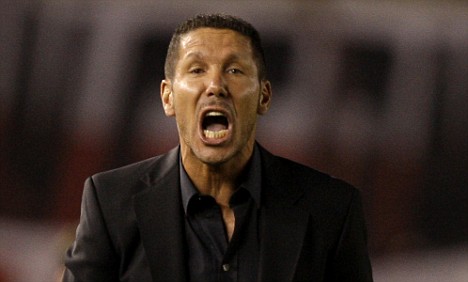 David Beckham must have permitted himself the slightest of malicious smiles in the wake of his former club Real Madrid’s Champions League triumph over city rivals Atlético, who were coached by Beckham’s World Cup ’98 nemesis Diego Simeone. Those of a certain age will readily remember how the wily Argentinian fouled Beckham, who petulantly kicked out at his antagonist instead of getting up and getting on with it.

Beckham was foolish, but Simeone had exploited the situation to his best advantage, admitting later that he feigned injury from the kick in order to get the England player sent off.  That’s exactly what happened, and the gallant ten men of England ended up going out on penalties in a familiar hard luck story. The unfortunate if misguided Beckham was vilified at home for his immature reaction to Simeone’s deliberate provocation, something he took years to live down.  Surely he must have harboured some resentment ever since?

If he has, then that resentment might just have had the edge taken off it at the end of the Champions League Final in Lisbon at the weekend.  Leading 1-0 deep into stoppage time, Simeone’s Atlético team were cruelly pegged back by an equaliser in the 93rd minute.  In extra time, Real’s class told as they ran out 4-1 winners – all of which proved a touch too much for the temperamental Simeone, who completely lost it on the touchline and appeared to be trying to get at the referee or others on the pitch who had offended his sensibilities.

For Beckham, it must have felt like the ultimate pay-off.  He’d had quite a bit of his own back for the disaster of ’98 by scoring a penalty against Argentina to defeat them 1-0 in the group stages of the 2002 World Cup, which would prove to be Simeone’s last appearance on that exalted stage. But to see one of his former clubs in Real inflict such a hammer-blow on his old enemy must have been a moment of great satisfaction – human nature being what it is.

Simeone, who has had great success this season as his team won la Liga, consigning Real to the ignominy of third spot, felt this reverse as a bitter blow to which he clearly reacted bitterly.  It’s almost certain that he will face UEFA sanctions for his unseemly display as Atlético’s defeat was confirmed – and the way in which the baser end of his nature was revealed will long be remembered by those who were queuing up to praise him in advance of the Lisbon final.

It had even been suggested in that run-up to the game that a film should be made of the rise of the Madrid underdogs, with Burt Lancaster playing the part of coach “Cholo” Simeone.  Quite apart from the fact that Lancaster would find this a difficult role to play, on account of having been dead these past 20 years, it may now be felt that he wasn’t in any case an appropriate actor to portray Cholo’s complex mixture of passion, slyness and thuggery.

As to who possibly could play this demanding role – a cross between former Leeds United stars turned film actors Vinnie Jones and Eric Cantona might just be ideal, if impossible to find outside of this blog’s imagination.  It’s just a thought, after all – but apart from the errant Argie portraying himself, I just can’t think of a better candidate.