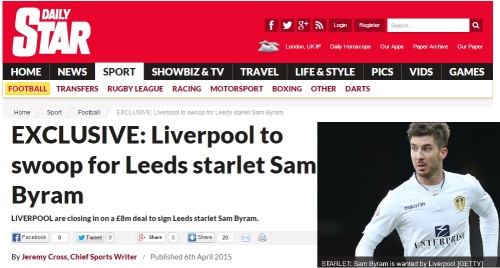 The weekly award for Most Outrageously Crap Made-Up Story About Leeds United, keenly fought over by the entire cadre of gutter press tabloids, has this week been awarded to the Daily Star – even though it’s only Monday. The judging panel decided that it was so unlikely anyone would come up with a worse effort this week, than that dreamed up by clueless Star hack Jeremy Cross, it was safe to award the trophy – a pile of pig ordure tastefully crafted in finest pewter, to the ridiculous yet amusing sports scribbler.

The story, based on zero evidence and fraught with inaccuracies, was deemed to be in the finest traditions of tabloid journalism for those reasons alone. The fact that the piece, which centred on young Sam Byram as the player the Star wish to unsettle, was illustrated with a picture of team-mate Luke Murphy, was the clincher for the award. A spokesman said: “The brilliance of making up a highly unlikely shot-in-the-dark story about one player, accompanied by a picture of a quite different player, was well appreciated by the awards panel. We’re seriously considering inducting Jeremy Cross into our legendary Salon des Incompétents Hall of Tabloid Fame, for services to base hackery.”

Following a hasty correction, the original picture of Luke Murphy was replaced by one of Byram, around whom the Cross fantasy had originally been spun, disappointingly detracting somewhat from the brilliant effrontery of the piece. However, this craven piece of backtracking was not thought sufficiently cowardly for the Gutter Hack Award to be withdrawn.

Sadly, the winner was unable to accept his award in person, as he was busy rifling through the dustbins of an England U-21 International for his next made-up “scoop”. In the absence of Jeremy Cross, the trophy was picked up by his faithful assistant, Jeremy Mildly-Annoyed.

The Daily Star is regrettably not available from newsagents, as they prefer more serious publications – like The Sun – but it can be obtained wherever budget toilet paper is sold.