Leeds United 0, The Idiots In Charge 3   – by Rob Atkinson

You can’t count on the love, Massimo, my friend

Nil Three at home, then. Not good but, in the context of what is now a dead rubber of a season, not disastrous either. Not on the face of it, anyway.

It’s when you set out to look at the factors behind this defeat that the blood pressure starts to elevate towards danger levels. For once, I’m not here to blame the officials – though they undoubtedly played their incompetent and over-zealous part. I’m not even here, as I frequently have been, to lambast the Football League. My concerns are a little closer to home at present.

Looked at a day or so in advance, this was a game that Leeds United should have been looking to win, in order to maintain their recent goodish run, with a view to taking some momentum and supporter goodwill into summer – whatever that may hold in store for us (apart from another Ashes mauling at the hands of the Aussies). It was a winnable game because, let’s face it, Blackburn always should be, to start off with. And then there was the matter of their forthcoming FA Cup replay against Liverpool. A team with that in the offing, and Wembley awaiting the winners, could perhaps be expected to be a little distracted and therefore, you’d have thought, ripe for the taking advantage of.

And, really, any game at home or away should have been winnable on this weekend of tragic memory. It’s 15 years on Sunday since we lost two of our number, brutally murdered in Istanbul.

For those 15 years, we’ve expected nothing less than total commitment from any Leeds team facing a fixture around this time. It’s about respect, which should act so as to enhance the standard level of professionalism and commitment we always look for. Any team facing Leeds on or about April the 5th should expect and be given a very hard time. It’s only right.

The ingredients were therefore in place for what should have been a Leeds performance to be reckoned with. But professional football is a game of fine margins, and any extraneous influence can act so as to reduce the chances of any team’s success on a given day. This week just gone, with quite appalling timing, the Leeds United powers that be have chosen to drop bombshells right into the middle of weekend preparations. A respected Assistant Coach, hardly in the job five minutes, has been suspended and told he has no future at Leeds; the Head Coach has apparently been told not to select the leading scorer due to unwelcome incentive provisions in his contract (so why did they agree them in the first place?) – and now that same Head Coach is having doubts about whether or not he can really carry on in charge. It’s difficult, he says – with admirable understatement.

So, whether or not the ref and his assistants are open to criticism, whether or not Blackburn Rovers performed above expectations, whether or not our team were below what we might have expected with the anniversary of Taksim Square imminent – the fact is that the people in charge at Leeds United, the chief among whom should not be influencing matters at all, currently – being banned – these people supposedly in control and acting in the club’s best interests have comported themselves like a bull in a china shop, smashing their way through the delicate business of preparing for a game without any regard for team or management morale. Those are not the actions of responsible owners. Those are the actions of clueless idiots.

Having stayed loyal for longer than was, with the benefit of 20-20 hindsight, either wise or reasonable – especially in the face of some bizarre decisions over the course of a bizarre season – this blog has had to perform an uncomfortable volte face. The events of this week have not, of themselves, caused any sudden, out of the blue 180 degree about-turn. Rather, they have been the last straw, the one that finally broke the camel’s back.

I can no longer stick up for Massimo Cellino and his cohorts. It’s all just become too ridiculous and humiliating. We’ve got a Hartlepool fan – a Hartlepool fan, for Christ’s sake – referring to us as a crisis club on Soccer Saturday. And it’s hard to do more than feebly protest that Jeff Stelling should move out of his glass house before throwing any stones. But he’s right. We are a crisis club – safety from relegation notwithstanding. How could we be seen as anything else? The leaders of the club are set fair to make us untouchable by any respected football professional in the game. If Redders were to walk – who would want to move into such a hands-tied, hamstrung job? Not anybody that, in an ideal world, I’d care to nominate.

Today, we lost a football match and had a lad sent off. It’s happened before, it will happen again. At the moment, those bare facts represent the very least of our worries. We’re now at the stage where more and more people, some of whom might be expected to have an apoplectic fit at the sacrilegious idea of a re-branded Elland Road, are now openly welcoming the prospect of new owners who might well do just that. That’s how desperate we have become; that’s the barometer of the urgent desire for change – yet again.

I should have realised the way things were going when I published a spoof article for April Fools’ Day, claiming that a Russian oil mogul was buying Cellino out. It got over 25,000 views, so it must have half-convinced some people. And, in the spirit of All Fools’ Day, I got some good-natured abuse for such an outrageous lie. But what I also got was a lot – a lot – of wistful responses, saying if only it were true, etc. That’s not the sign of a happy support – and it was a big enough sample to make me to think it’s a fair indicator of the current mood. Right now, if Red Bull were to march in and paint the whole stadium some god-awful shade of the devil’s colour – you get the feeling that a lot would simply sigh and say, get on with it, then – see where we go. That’s a shocking state of affairs.

For now, we simply have to blunder on, and hope that this season peters away without too much more in the way of humiliation. The Blackburn game doesn’t matter, of itself. Nor, to be honest, does a tough-looking fixture at Wolves on Bank Holiday Monday. It’s the factors behind the Blackburn result, and behind whatever might happen to us at Molineux, that are of real concern at the moment. I think it’s right and fair to lay the blame for this 0-3 defeat squarely at the door of the owners, whatever else might have gone wrong. And I feel the same way about the Wolves game. If we do well, I’ll praise the lads and the manager. If we get – as I fear – a proper seeing-to, I’ll be blaming the suits.

After a long struggle to stay loyal, and with the way I feel with all that has happened this week – and with Jeff Stelling’s non-ironic words buzzing in my head – that’s just the way it is now for this once but no longer pro-Cellino blog.

Another of those mind-boggled moments this morning, when I saw the picture above. Is this for real? Can anyone really be so stupid, vicious or just plain wicked as to pose that tweet on this weekend, above all others? It would be crassly insensitive at any time – on the 15th anniversary weekend of the murder of Chris and Kev, it simply defies belief.

It’s not automatic simply to assume that Wesley Sneidjer – a player who, as far as I’m aware, has no particular grudge against Leeds United – is having some sort of warped go at the club or the fans. He may well simply be exhibiting a Kewell-esque level of dim stupidity, or lack of thought and understanding. In common with so many footballers, Sneijder may not be exactly overburdened with brains. Even so, this is a low and horrible thing to become involved with, at this particular time, as we prepare to pay our 15th anniversary tributes to our murdered brothers.

And the thing is – someone involved is well aware of the implications and the back story here. Footballers don’t do anything on their own beyond, in some more advanced cases, tying their own shoelaces. There’s an army of marketing people, advisers, agents, scum like that. Somebody knows all too well the effect of that tweet on the Leeds United world. They’ll also be well aware of the amusement it will afford to fans of certain clubs who view this kind of thing with sick and moronic relish. Marketing and publicity are arts without a soul or a conscience. If they can sell their product by appealing to the very worst in the malign minority, then they’ll do it – and they’ll do it knowingly – and to hell with the feelings and hurt of those directly or indirectly affected. That’s a kind of evil in itself.

All of that might make us a little more tolerant and understanding of the comparatively harmless phenomenon of mere stupidity, as exhibited that time by Chuckle Brothers Keys and Gray – or indeed by our one-time hero turned traitor and hate figure Harry Kewell. It’s just odd, don’t you feel, that this particular sort of “stupidity” generally manifests itself to the detriment and insult of Leeds United. You don’t get similar “errors of judgement” being made where Man U or Liverpool are concerned – or do you? You tell me.

And please – if anyone is of a mind to justify any of this crap by saying “Well, you lot sing about Munich” – spare me. I’ve heard it all before. It’s not even true, these days – and even if it were, that’d be no reason to heap misery on the heads of people who will be mourning this weekend, remembering loved ones who went to see a football match and never came home. You don’t visit the sins of the idiot minority upon innocent heads – not if you’ve a brain in your skull or any human compassion in your heart, you don’t. So leave it out, if you’re of a “mind” to send such rubbish in. It’ll only get binned anyway. 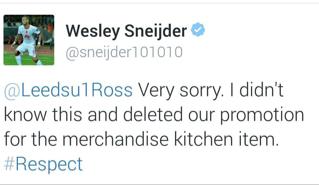 …turns out he didn’t know

Wesley Sneidjer, unknowingly it seems from the above, has provided the ammunition for a lot of evil morons out there to make what was always going to be a hard weekend for many into something much more hurtful and upsetting yet. I hope he really is suitably contrite. An apologetic tweet was the least he could do, and the removal of the offending item is a real bonus. But the fact remains that there was full awareness somewhere behind this; people seeking to capitalise on hatred and murder. And for those all-too-well-aware smart guys behind it – well, let’s just hope that they eventually find out there’s something in Karma after all.