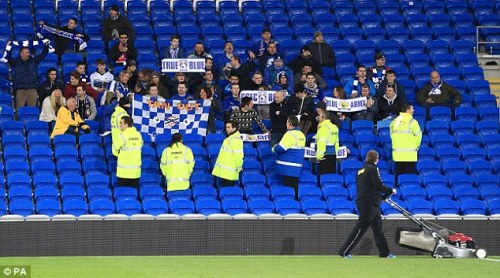 Too soft to go to Leeds: massed Cardiff fans safe and well-guarded at home

Prior to this weekend, it had been thought that the seasonal award for “Scarediest Fans in the Championship” would have gone to the stalwarts of Millwall FC, after their entire away following for the recent defeat at Elland Road turned up on a skateboard and spent the match, pale of face and quivering silently, high up in the West Stand.

However, it has now emerged that the followers of Cardiff City have somehow contrived to out-chicken even those tragically faint-of-heart Millwall “supporters”, by bringing a grand total of zero fans to their away fixture at Leeds United. The trip to LS11 is generally accepted as the acid test by which other Championship clubs can measure their fan’s moral courage or lack thereof. Millwall achieved a rating of “lily-livered“, which was expected to see their supporters crowned “Most Frit 2014/15“. But the Cardiff score has taken them into the realm of the spineless, with a provisional rating of “Soft as an embryo jellyfish“.

A spokesman for the Bluebirds Travel Club, Dai Arrear, confirmed that there had been absolutely no appetite at all for a tough trip North. “The guys are staying in the Valleys, isn’t it,” he quavered, nervously. “They didn’t fancy it, see. So they’re stayin’ yer, boyo, where it’s a bit more peaceful, like.”

The response at Leeds was one of frank puzzlement. United’s away allocation is invariably over-subscribed and the club take a vociferous following with them, even for a midweek “bubble” match. “We thought that clubs like Millwall and Cardiff would return the compliment,” said one baffled Leeds “Barmy Army” regular. “It’s most upsetting and really a bit rude. We always plan a warm welcome for our visitors, as we invariably receive around the country ourselves. To have not one single fan representing you at an away match – it’s ridiculous. Shameful.”

Millwall fans will be relieved to have avoided the unwanted title of “Softest Cissies in the League” in what is expected to be their last season at this level for some time. But the fact remains that both of these clubs trade on what seems now to be an entirely unmerited reputation for exuberant feistiness. It is to be hoped that both will do better in their respective leagues next time around. Millwall are expected to be in League One for the 2015/16 season, and it may well be that trips to Barnsley and Sheffield United will be easier on their jumpy nerves than the Elland Road ordeal.

Cardiff should have the chance to redeem themselves next time around and may well be encouraged by the thought that, having achieved a zero away following for this weekend, at least things can’t get any more embarrassingly shameful than that, next year.

For now, though, they will remain objects of ridicule, laughed at for being “as scared as David Camoron bottling a live debate with Ed Miliband“. Whether that rather severe judgement seems a little harsh is open to some doubt. But the once-notorious “soul crew” – long prefixed with the letter R in and around Leeds – do seem to be bang to rights on a charge of moral cowardice – and that’s not something they’d be proud to sing about in the Valleys this week.