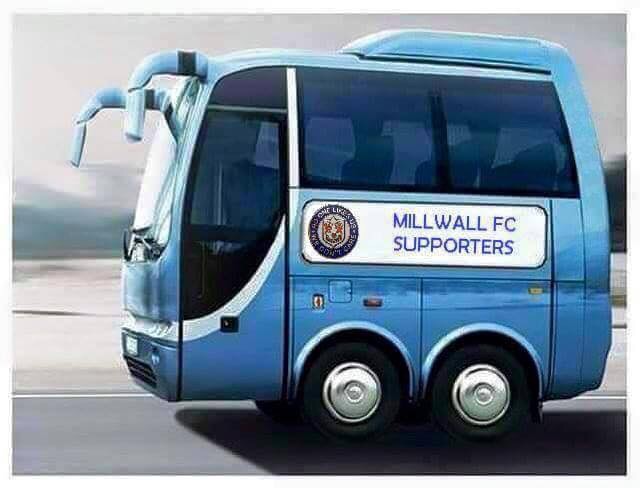 When you bid a fond farewell to someone, it normally means you regret they’re going; that you’ll miss them and eagerly await their return. Leeds United fans have made that kind of farewell often enough – various Elland Road heroes have left us over the years, with varying degrees of regret or relief on both sides.

The fond farewell we’re bidding to Millwall FC, however, is a horse of a different colour. This farewell is one we’re glad to be making. It’s a case of “off you go, chaps, and don’t hurry back”. The Lions probably will be back at some point; we shall have to hope that by that time we’ve moved onwards and upwards ourselves, so avoiding the need to sully our boots in competition with such a very horrible club.

For Millwall, let’s face it, have been a blight on the Championship ever since they dragged themselves up to this level. They have conducted themselves in a less than admirable fashion, certainly off the field and in the stands, where they continue to be followed by a rag-tag bunch of racists and knuckleheaded thugs, who disgrace themselves at every possible opportunity. We at Leeds are familiar with the sickening glee that has accompanied their Turkish favours, so blatantly – even proudly – displayed, every time Leeds have been visitors to their Meccano ground.

This eager desire to make fun of murder and loss is what has distinguished Millwall fans from almost every other set of supporters in the country – Man U being one possible and unsurprising exception. Maybe it’s a southern thing, then – but you don’t get that sort of stuff from many other southern sets of fans – not even Spurs.

Millwall’s visits to Leeds haven’t been anything like as troublesome, mainly as they’ve largely bottled that particular trip North, turning up in dribs and drabs that make an embarrassing mockery of their much-vaunted F-troop reputation. The excuse always offered is that those fixtures have been “bubble matches” events heavily policed with fan travel controlled and tickets issued in return for vouchers. It’s the kind of arrangement that makes away support more difficult, certainly – but not impossible by any means.

Leeds have been affected by such measures – but it hasn’t stopped us taking the usual large numbers to places like Cardiff. Millwall’s recent average at Leeds has been in the order of a couple of dozen who sit shivering, high up in the stand – a sad indictment of a supposedly scary away support. The flip side of this coin is the effect on a game’s atmosphere; on the other hand, it’s preferable to having buses smashed up and your stadium befouled by some fairly uncivilised visitors.

Twitter last night was aglow with supporters of other clubs, jubilant at Millwall’s fall from grace. That says a lot about the way their particular brand of “support” is distasteful to other fans. It was somehow appropriate that it should be Rotherham United who hammered home the final nail in the Millwall coffin by beating Reading and ensuring their own safety – despite a three point deduction that has made Millwall’s failure look narrower than it really is. But Rotherham will take keen pleasure in administering the fatal blow to a club whose fans reverted to type when, shortly after a tiny band of them witnessed defeat at Leeds, a rather larger mob rioted as their favourites lost at Rotherham’s New York Stadium.

Millwall’s relegation is entirely deserved on merit; they’ve clearly been one of the three worst teams in the league, and their demotion is probably a week or so overdue. Their fans also do not deserve to be mixing it with some of the elite clubs in the game; their proper level is where they’re now returning to, and the likes of Barnsley, Burton Albion and Shrewsbury must be wished the very best of luck in dealing with the invading reprobates.

Millwall will not be missed by Leeds United, nor, I believe, by most other clubs in the Championship. May their stay at a lower level be long and unrewarding – and may their supporters reflect that, in the misery and hurt of relegation, they are reaping now what they have been sowing for far too long.

This entry was posted in Football, Leeds United and tagged League One, Leeds United, Millwall FC, relegation. Bookmark the permalink.