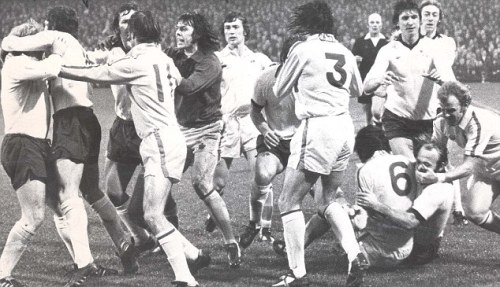 Norman stops Frannie’s lip by putting a hole in it

There’s never been a shortage of feeling in matches between Derby County and Leeds United – not since the days when it was Clough versus Revie, anyway. In the years that the two Middlesbrough lads locked horns at either Elland Road or the quagmire that was the Baseball Ground, those feelings tended to run deep, and often spilled over into epic violence, with both sets of players going at it with relish. The pictures above are fairly typical of a Rams v United clash in those far-off, halcyon days – certainly the players of each club felt a deep and mutual rivalry, and to say that the matches were keenly contested is to show a talent for understatement.

Off the field, the situation was somewhat less mutual. Derby County hated Leeds, alright – no doubt about that. But Leeds fans of that era were well aware of their beloved team’s pre-eminence over most if not all others – so the attitude towards lesser clubs (i.e. just about everybody) tended to be one of lordly indifference. The few exceptions to this rule included manchester united and, to a lesser but still vitriolic degree, Chelsea. These two were accepted as deserving of hatred, despite their obvious inferiority on the field. But the rest, busy Leeds-haters though they might be, tended to get ignored. Naturally, this did not make the Whites any more popular around the country. Spurned haters are just as hotly resentful as spurned lovers, if not more so.

Derby were a case in point back in the 70s, and it’s a situation that persists to this day. They do have a neighbourly loathing for Nottingham Forest, made the more bitter because the comically-nicknamed Tricky Trees got second and better use out of County’s discarded Clough/Taylor axis. Geographical proximity and the Cloughie factor make this mutual antipathy as real as most. But Derby hate Leeds with an almost equal passion – and, frustratingly beyond measure for their fans, it’s entirely unrequited – which really does get under the skin of your average Ram.

The history between the two clubs over the past couple of decades has been a tale of two long periods of dominance, one for each side.  First Leeds had a spell when they found they could toy with Derby as a cat does a half-dead mouse, exacting the maximum in malicious pleasure by torturing them, before dispatching them mercilessly. This was a period of acute suffering for a Leeds-hating County fan. One season, we knocked them out of both cups on their own ground, with the FA Cup win being from two goals down. On another occasion, we gave them a three goal start at Elland Road, before storming back to win 4-3 with Lee Bowyer notching a last-gasp winner before an ecstatic Kop. Later that season, we went to the incongruously named Pride Park and leathered the home side 5-0. It was not a good time to be a Derby County fan.

Then, things turned round for Derby; in a period that coincided with United’s dramatic fall from grace after “living the dream”, Leeds simply could not buy a win against the Rams. Defeat followed defeat – though at a time when most teams were beating us with monotonous regularity, the sting of each loss was not noticeably worse than those against most other teams. For Derby, though, it was like a renaissance – they were beating Leeds, for the first time in years – and they did not particularly care that this was not a Leeds of any special vintage or calibre.

The fallow period against the Rams, though, appears to be coming to an end. Firstly, we managed to avoid defeat in a late-season encounter at Elland Road. Then, last season, each team enjoyed a comfortable 2-0 win at home; honours even. Tomorrow’s first Derby-Leeds clash this season will, as usual, be Cup Final day for every Ram. They will be aching to beat us, yearning for the three points as a child yearns for Christmas. It will be very much business as usual for Derby fans, and Leeds United will have to be wary of the intense desire and expectations of the home fans, factors that can certainly inspire a side.

But tomorrow is also Cup Final day for Leeds – and not in any ersatz or theoretical sense as experienced by County followers. Leeds, being a centre of sport unrivaled anywhere else in the country, boasts widely-renowned teams in three sports, with Yorkshire CCC at the summit of the County Championship in cricket, Leeds United showing signs of revival as their glorious history positively demands – and in Rugby League, Leeds Rhinos has long been the team to beat. Tomorrow, they take the field at Wembley in the Challenge Cup Final, with the unfancied Hull Kingston Rovers in opposition. This is not a sentiment that every Leeds United fan will share, but – this being my blog to do with as I wish – I will be hoping and praying that my beloved Rhinos can confirm what the form guide suggests will happen, and bring the Challenge Cup home to Headingley.

Saturday is about two Cup Finals and two Leeds teams. My fingers are crossed that Derby’s prayers go unanswered and that they are left thwarted again, as in the good old days. But, should United stumble to a first defeat of the season, I’ll still manage to keep a smile on my face – as long as Sir Kev‘s warriors do the business at Wembley and achieve the first part of a Rhinos treble.

All Leeds, aren’t we?