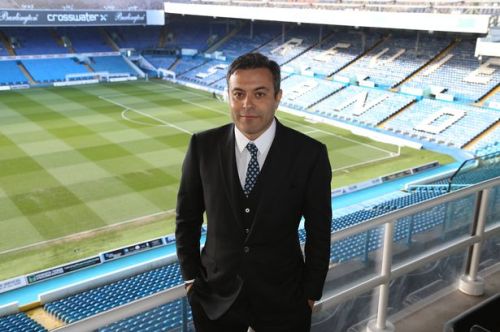 Radrizzani – master of all he surveys

Suddenly, there’s a feelgood factor about Leeds United, one that I’ve long predicted would come about when – and only when – the club became free of Massimo Cellino. Only when the maverick Italian was gone would we be able to look ahead with optimism. Only then could we start Marching On Together again, instead of being hopelessly disunited. And now it’s finally happened – Cellino has departed from Elland Road, a harmful and divisive influence whose supporters could see only good in him, and whose detractors could see only bad.

Whoever was right – and the truth, as ever, was probably somewhere in the middle – it was this dramatic polarisation of opinion in the support base that was so bad for Leeds. A support divided against itself could not be wholeheartedly behind the club. Now, the issue dividing us is gone, and it must be every United fan’s fervent hope that we can all start singing once again from the same hymn sheet.

New sole owner Andrea Radrizzani has certainly got off on the right foot, and we will expect him to maintain his positive outlook. For the first few days of his tenure, taking up the option on Garry Monk‘s extra year, with a longer-term deal to be discussed, would have been fine on its own. Add to that tying down one of the most exciting midfield prospects in the country to a four year deal, and we appear to be cooking with gas – because Ronaldo Vieira is every bit as hot a prospect as his famous names would suggest. And then, the cherry on the icing on the cake for this momentous first week of Radrizzani – it would seem that the club will once again own its spiritual home of Elland Road “by the end of the summer”.

That stadium purchase timescale lacks the immediate impact of Cellino’s “off down the ATM to get the money to buy the ground on Day One” promise. But the difference is, of course, that Radrizzani will probably deliver on his less sensational claim, whereas Cellino’s soundbite was just the first of many he failed to bring to fruition. Any Leeds fan will tell you it’s always felt better when our home was our own – it’s a reassuring prospect to look forward to and, at last, we can look forward with confidence.

And the summer as a whole is looking a lot brighter than previous summers have turned out to be, irrespective of the amount of sunshine we get. Radrizzani has stated that he is “here to make history, not money”. That’s a very sensible and realistic plan for any owner; making good on it is something else, but the intentions are spot on. It’s rightly said that the only way to make a small fortune out of football is by starting off with a large one – but the owner who has his eye on making history will inevitably find that financial rewards accrue also. Just getting into the Premier League would yield a bountiful harvest, as either Huddersfield or Reading are about to find out. The difference is that, when it’s Leeds United’s turn, there will be a new force in the top league capable of building on the financial bounty to make a mark in the game.

These are exciting times, as witness the flood of season ticket purchases for the next campaign. United have hit 15,000 already, before the old season is actually finished. That’s an impressive performance compared to other recent years, and a sign of the new feeling around the club. What divided us has gone, what has always united us is still alive and kicking; that big club buzz of an awakening giant.

Good luck, Andrea, and all your new backroom staff. As for the future – bring it on. The way things have started, it should be one to relish.