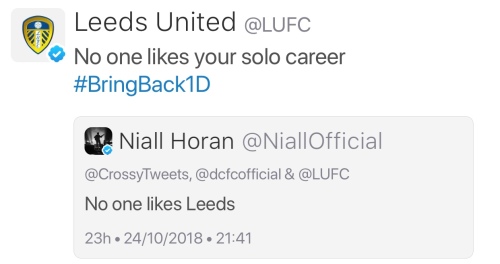 In the latest twist to the ongoing dispute between renegade Championship club Leeds United and the football authorities, the FA are set to charge the Yorkshire giants over what is being seen as their online bullying of former One Direction member and current solo nonentity Niall Horan.

This latest spat started when Horan remarked on Twitter that “No one likes Leeds”. The United media team, in the name of fun lolz and bantz, responded with “No one likes your solo career” and the hashtag #BringBack1D – upon which the 25 year old Irish millionaire broke down crying and contacted the FA.

An examination of this issue could persuade Leeds to utilise the classic “libel defence” against any charge arising out of the Twitter exchange, ie that their statement was true and no one does like Horan’s solo career. After all, his original X Factor audition was as a solo artiste, and he was eliminated (although Louis Walsh liked him, allegedly).

Derby County fan Horan, in an emotional statement to the football authorities, claimed that he was “deeply hurt”. His remark had been “innocent”, he insisted, adding “Anyway, no one does like Leeds. They don’t, they don’t!“, before stamping his feet and flouncing off, muttering about “Poor Franny and that thug Hunter” and “that spawny 4-1 win at Pride Park”.

When asked about their Twitter riposte to Horan’s tweet, Leeds United would only comment “We should make it absolutely clear, this was just a joke on our part; we’re not really advocating that One Direction should re-form. God, no”. However, the FA’s notorious Boy Band Compliance Unit are said to be taking a dim view of United’s attitude towards one of their fave solo stars, and are likely to relegate the Whites to the Conference with immediate effect.