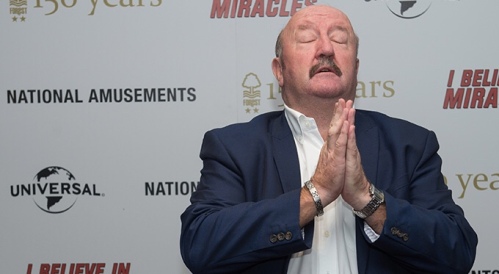 Former Leeds United captain Kenny Burns has added his voice to the chorus of disapproval over Kemar Roofe‘s late equaliser against Notts Forest at the weekend. Leeds had been trailing for most of the game, despite dominating play, when Roofe struck with time running out to secure United the point which was the least they had deserved. But Burns was unhappy, and has been quoted as saying that Forest were “robbed”. I use the term “has been” advisedly.

Burns, of course, served Forest with some distinction in the late seventies, before sealing a move to Elland Road in a £400,000 deal in 1981. His main claim to fame in the white shirt is helping get Leeds relegated in 1982, and it would seem that he’d rather forget his time at United, preferring to adopt the “whinging ex-pro” role for the Nottingham local rag. In this capacity, he has apparently set himself up as judge and jury with a Notts Forest bias, bleating at length about what he clearly sees as cheating.

The man at the centre of the row, Roofe himself, remains unrepentant, pointing out that it’s the referee’s job to spot any infringements and rule accordingly. It does seem rather ironic that those of a “Tricky Trees” persuasion, including it would appear Sky TV, should be squealing about robbery, when their team almost blagged three points from a game in which they’d been totally outplayed.

But there you go. As anyone would confirm who saw Burns play, he may not be the best judge of fairness on a football pitch. Chalk up another professional Leeds United hater who’s just had to suck it up since last Saturday. The very best of hard cheese, too.

This blog will be keeping a close eye on future words of wisdom from Kenny Burns – particularly in the wake of any situation where Notts Forest benefit from a debatable ref call, like this one, for instance. But – being all too familiar with the blinkered hypocrisy of the Burns type of pundit – we won’t be holding our breath…