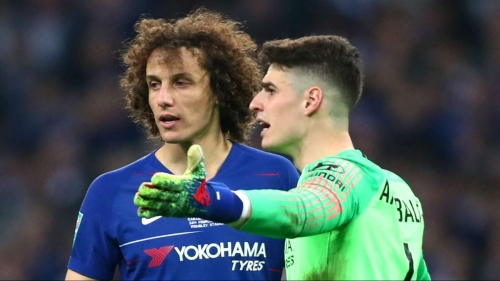 Today isn’t the first time I’ve felt a bit sorry for Chelsea, even though as a Leeds United fan, it’s in my DNA to despise them, and I normally manage that quite well. But I sympathised when they lost a Champions League Final on penalties to you-know-who, after outplaying them during the game itself. As loud as were the celebrations the length and breadth of Devon that night, I was gutted for the Bluescum. It was a question of which is the greater evil – no contest.

Today, though, I felt sorry for them at Wembley in defeat to Man City, even though I wanted City to win, naturally. I think everyone knows what happened, with the Chelsea goalkeeper, whose name I can’t be bothered to look up, refusing to come off when his number went up for substitution near the end of extra time. The lad put himself first and his manager Maurizio Sarri nowhere, showing a total lack of respect for his team-mates in the process. The outcome seemed incredible, but the player remained on the field, and his team duly went on to lose to City, with the young lad (Kepa Arrizabalaga, that’s his name) diving over one he should have saved. Coach Sarri cut a forlorn figure as he followed his defeated team up the Wembley steps, and it’s difficult to say what his future now holds. But it seems fair to say, despite his post-match attempts at smoothing things over, that he was hung out to dry by a young lad who needs to learn, and learn fast, that what the boss says, goes.

A lot of what was missing today at Wembley for Chelsea, quite apart from that vital element of respect for the coach, was a bit of on-field leadership. Now my club, Leeds United – although our squad is infinitely less costly and talented than Chelsea’s – has that quality of leadership in spades, both on and off the field. In the first place, none of our players would even think of defying coach Marcelo Bielsa – and in the second, there’d be no shortage of volunteers to point out, not so gently, the error of his ways to any player daft enough to try it. In today’s game, only David Luiz made some sort of half-hearted attempt to set a young player back onto the straight and narrow, and it wasn’t nearly enough.

A great example of what I’m talking about occurred during yesterday’s win over Bolton. Leeds were awarded a penalty during the first half (check the records if you don’t believe me) and, in the absence of regular spot kick taker Kemar Roofe, there were three contenders to grab the ball. Patrick Bamford was the man who got to it first, but Pablo Hernandez was quite interested, and tyro Tyler Roberts was positively insistent. Roberts was prepared to make an issue of it when, from the back, Luke Ayling came steaming into the area and grabbed Tyler by the scruff of the neck to usher him away and let Bamford get on with it. I’m sure that Pontus Jansson and Liam Cooper et al would have intervened if necessary, but Roberts wisely yielded before things got that serious. The penalty was converted, and they all lived happily ever after.

That Elland Road penalty incident didn’t directly involve the coach, but it does demonstrate the importance of players showing some leadership and solidarity on the pitch, when all the manager can do is holler from a hundred yards away above the noise of a 35,000 crowd. On-field leadership is the eleventh commandment as far as football is concerned, and Chelsea grievously lacked it today. The rest of the team, faced with such blatant defiance of the manager, should have been frogmarching their arrogant young keeper off – because once the boss’s authority is compromised, it’s a slippery slope downwards. Luiz apart, the Chelsea players simply stood by and watched. Clearly, some sort of damage limitation script was agreed for the eager Sky interviewers afterwards, but the fact remains that there are big problems at Chelsea, problems that they seem to lack the essential character to deal with.

In the circumstances, I fear for Sarri, whose authority now appears to be shot through. But, for me, he can hold his head up high; the fault lies with a young professional who has set himself in defiance of his boss, as well as the senior professionals, Luiz apart, who failed to enforce their manager’s will on the field. To me, going into a penalty shoot-out just minutes after that scene of disgrace and confusion, Chelsea were certs to lose, and it was no surprise that they did, missing their first penalty and then seeing their rebellious keeper dive over one that he should have saved. Justice was served, it seemed, for everyone except poor Sarri.

Incidentally, this sort of thing has happened before, and in circumstances surprising to those who were so quick to claim that what happened to Sarri would never have happened to Alex Ferguson. Because Ferguson was the Man U manager in 1991, when they faced Sheffield Wednesday at Wembley in the League Cup Final. Les Sealey, since sadly deceased, was the Red Devils keeper, and he sustained a deep knee gash for which they wanted to sub him – but the hotheaded Sealey refused to be subbed, getting almost violent with the member of the coaching staff trying to see him off the pitch. Wednesday went on to win 1-0 with a goal from John Sheridan.

It’s not often that I look at a major final, and at the situation of a major and majorly rich, honour-laden club like Chelsea, and end up with my appreciation of the way my own club is run so greatly enhanced. But it happened today. Chelsea could learn a lot from the way things are done at Leeds – but I wish only the best for their beleaguered coach Maurizio Sarri, whatever fate now has in store for him.

4 responses to “Chelsea Need Some Leeds Style On-field Leadership, but Sarri Should Hold His Head High – by Rob Atkinson”