A last minute winner for Lee Bowyer’s Charlton Athletic condemned Sunderland to at least one more season in League One, and ensured that the first two playoff finals, at least, panned out as per my personal requirements.

It had been good to see Newport depart on the return journey to Wales with tears in their eyes and tails between their legs. Quite apart from having had a soft spot for Tranmere since their Cup exploits under John Aldridge, I’ve not yet forgiven Newport for our FA Cup humiliation a year or so back. Call me bitter and twisted, but that’s just the way it is.

How much more riddled with spite and vicious nastiness am I then with regard to Sunderland, who have been living off their fluke FA Cup success against Super Leeds ever since 1973? Much, MUCH more, that’s how much. The fact that one of my Whites heroes of the past few decades, Lee Bowyer, was a direct beneficiary of the Mackems’ inadequacy simply made a sweet occasion all the sweeter. I’ve frankly hated Sunderland for all the time I’ve been a Leeds fan, despised Bob Stokoe, and celebrated every time we’ve beaten the Wearsiders, as we usually do. They keep going back to Wembley, and they keep failing. They’ve done it twice this season, and I’ve loved every minute.

Now all I need is for Aston Villa to beat Derby tomorrow – with a few Fwankie tears thrown in, if at all possible. Really – is that too much to ask? 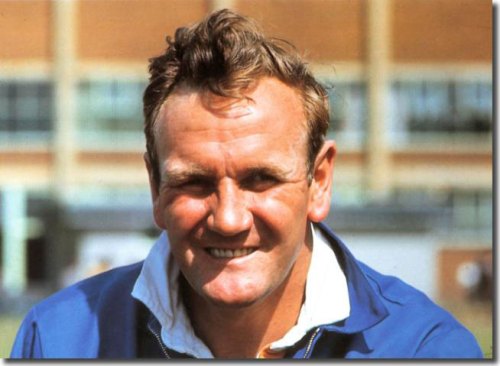 The Don of Elland Road – 30 years gone, but never forgotten

They say that great players don’t always make great managers, and Bobby Charlton is a stand-out example of that essential truth. His brother Jack, by common consent not anything like the player Bobby was, but ten times the bloke, was by far the more successful manager. Then again – he learned from the best.

And they will twist the argument around to show that average players can make great managers. We’re usually invited by a brainwashed and indoctrinated media to take Alex Ferguson as an example of this; my own choice would be Arsene Wenger, a deeply average player but a highly superior coach, tactician and innovator who made a significant dent in the Man U monopoly of the Premier League – despite the vast off-field advantages of the Salford club. Remember Wenger’s “Invincibles”?

But there are a select few examples of truly great players who went on to be truly great managers – the likes of Busby and Dalglish, for instance – and I will argue passionately to my last breath that the best of the best was Donald George Revie, who died of Motor Neurone Disease 30 years ago this very day.

Don Revie was an innovative, thinking footballer, the pivot of the famous “Revie Plan” at Manchester City when he was the first to exploit deep-lying centre-forward play to great effect as City hit the heights in the mid to late fifties. He was instrumental in the Wembley defeat of Birmingham City in the FA Cup Final of 1956, and also helped restore English pride after two batterings by Hungary – the Magnificent Magyars having trounced England 6-3 at Wembley and 7-1 in Budapest. Revie’s adapted attacking role helped the National team annihilate Scotland 7-2 and his reputation was made as a selfless team player who was adept at making the ball do the work while team-mates found space as he dropped deep, baffling the defences of the time.

Revie was clearly a thinker, and developed very definite ideas about the game during his playing career, ideas he would later put into practice to devastating effect as a club manager. It is undeniable that, during his thirteen years in charge at Leeds, he elevated them from simply nowhere in the game to its very pinnacle, preaching togetherness and the team ethic above all else. Respected judges within the game have described the football played by Leeds at their peak as unmatched, before or since. In the eyes of many, that Leeds United team were the finest English side ever, a unit of grisly efficiency and teak-hardness yet capable of football which was outstandingly, breathtakingly beautiful, intricate in its conception and build-up, devastating in its effect.

Here is the scale of Revie’s achievement: in an era before the advent of lavish sponsorship and advanced commercial operations, he built a club from the ground upwards – a club with an apathetic support, which had hardly two ha’pennies to rub together, and whose prime asset was a group of raw but promising youngsters. The way that Revie nurtured those youngsters, moulding them into a team of supreme talent and majestic ability, is the stuff of legend. In some cases, he had to ward off the threats of homesickness: a young Billy Bremner was determined to go home to his native Scotland and Revie arranged for his girlfriend to move to Leeds, helping the lad settle down. Sometimes he had to adapt a player from one position to another – Terry Cooper was an indifferent winger who was made into a world-class overlapping full-back. Examples of his inspirational and man-management skills are many; he wrote the modern managerial manual from scratch.

Revie raised almost an entire squad from the junior ranks through to full international status, but he also had an unerring eye for a transfer market bargain. He took Bobby Collins from Everton, and saw the diminutive veteran midfielder produce the best form of his career. He lured a disaffected John Giles from Old Trafford where he was an under-rated performer. Giles swore that he would “haunt” Matt Busby, the manager who let him go, and Revie enabled this vow to be realised, converting Giles to a more central role after the end of Collins’ first team career. Giles and Bremner would form an almost telepathic central midfield partnership for Leeds, carrying all before them over the muddy battlefields of Division One. Revie later described his recruitment of Giles from Man U as “robbery with violence”.

As the sixties wore on, the Don would add Mick Jones and Allan Clarke to his formidable squad while it grew up together in a family atmosphere at Elland Road. Rarely if ever before or since can a manager have been so involved in his team’s welfare and well-being; no mere tracksuit manager this. There would be flowers and chocolates when a player’s girlfriend or wife celebrated a birthday, a listening ear and helping hand whenever problems threatened to affect a man’s form. Revie was a father figure to his players for over a decade, forming a bond of mutual loyalty and respect that still sets the standard for enlightened management today.

Don Revie has been described in scornful terms by the ignorant, as a dossier-obsessed and over-superstitious manager, then again as a coaching genius by some people of insight and judgement, and as simply the best by his players who still survive from that amazing period of Leeds United’s dominance at home and abroad. He was perhaps too reliant on lucky suits and the lifting of gypsy curses, and other such supernatural preoccupations. He could maybe have let his team “off the leash” a little earlier than he did – when given full rein, they were next door to unstoppable. But it’s hard to hold the caution and superstition of the man against him; this was a time unlike today when livelihoods depended on a bounce of the ball, when results mattered in a bread and butter way. There were no cossetted millionaires then, no examples of young men who could pack it all in tomorrow and live in luxury for the rest of their lives. It all meant so much more in those days and the word “pressure” had real resonance.

The modern coaches have greats among their number, there’s no doubt about that. It would be invidious to single out names; after all, the media in a misguided fit of uncritical and commercially-motivated hero-worship have been busily engaged for most of the last three decades in dubbing “S’ralex” as the greatest ever. But the legend that is Don Revie can sit comfortably on his laurels, the man who – more than any other – took a sow’s ear of a football club and made of it a purse of the very finest silk which yet concealed a core of Yorkshire steel.

After a season in which a number of high profile managers have conducted themselves disgracefully by rabble-rousing in the media – and I’m thinking mainly of the two opposing managers for Monday’s Championship playoff final – it’s fitting that we can remember with fondness and immense pride a true managerial giant.