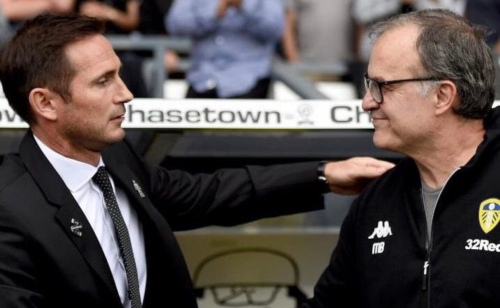 Fwankie and Marcelo, student and master

It’s the silly season, and the media’s favourite target, Leeds United, is – as usual – the subject of ever more ridiculous attempts at sensationalism designed to sell gutter rags or attract clicks on gutter websites. Among the more laughable lately have been the suggestions that United are after various superannuated Italian football pensioners, along with the perennial line that always comes out when a club with a Leeds chip on its shoulder signs a player. Yes, you know, the angle where said club has “beaten Leeds United to the signature” of whoever. Invariably, it’s one of the rare players we’ve not been linked with, have never heard of, and wouldn’t touch with the proverbial bargepole.

That mention of pensioners brings me on to the subject of Chelsea, who are hotly tipped to snatch media darling Fwankie Lampard from the clammy grasp of Derby County. The media line being peddled here is that Lampard’s move to Stamford Bridge would result in him having a Spygate-provoked tantrum at the merest suggestion that Dirty Leeds might have a Chelsea player under the covetous gaze of their transfer market binoculars. Fwankie just would not allow this, screech the media, because, you know, Spygate. And Bielsa. So it won’t happen and Leeds are doomed, these desperate hacks smugly conclude, before settling down to lick Fwankie’s boots and judiciously selected parts of his anatomy.

All very petty, all very predictable. And all, as usual, completely untrue. The fact of the matter is that any Chelsea player good enough to excite the interest of Bielsa would simply not be available. The reason for this is that Chelsea are subject to a two window transfer ban that will see them having to rely, to an extent, on youngsters they’d normally have farmed out on loan to assist in their development. But now these kids will be needed by Chelsea, so there’s little chance of anyone worthwhile being made available, QED. The only remotely plausible bit of this media fantasy – that Fwankie would be spoilt and petulant enough to block a transfer to Leeds because he’s basically a bitter child – need not concern us. Anyway, the Tearful One is going to have bigger problems on his plate, happily enough, through being hopelessly out of his depth in the top flight.

Roll on August, when the silly season makes way for the actual football season. Not that this will stop the media hating and sniping at Leeds – but at least we’ll have the odd game or two to distract us.