As Some Leeds “Fans” Have Demoralised Bamford, Is It Time for Some Big Kev Swagger? – by Rob Atkinson 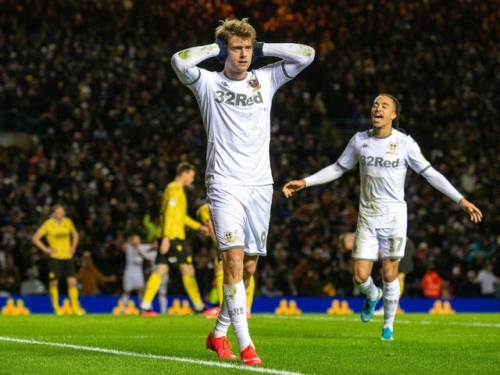 Bamford – trying to hear no evil

Even in the triumphant moments following his winner against Millwall in midweek, you could tell that Patrick Bamford has been got at by the relentless negativity and sheer destructiveness of a section of Leeds United’s “support” (for want of a more appropriate and descriptive word). Bamford had stuck away a diving header to complete the comeback from two down against one of our real bogey sides. His celebration was pointed – a strained, unsmiling face, ears covered in a defensive signal, not cupped in mockery. Despite his two goals, this was not a happy man. The famous Leeds United boo boys – mostly Twitter or other social media trolls, but there is a matchday gang too – might just be on the point of chasing yet another demoralised striker out of the club.

That would be a hell of a shame, but no real surprise, we’ve seen this sort of thing before. In Bamford’s case, I’ve been doing my best to blame online trolls, of which Leeds United have an ample sufficiency. But a picture of some vile graffiti aimed at our No. 9, daubed inside the South Stand by some witless moron, confirms that supporter stupidity is not confined to the Internet in all its various manifestations. Those critical of Bamford’s gesture might be described as “disingenuous at best”. Personally, I think that description has altogether too many letters.

Against Wigan this weekend, things didn’t go that well for anyone and, predictably, the self-appointed football experts were all over social media again, seemingly happy with the opportunity an unlucky defeat to a jammy goal affords them, and taking sideswipes at players and management alike, presumably in the name of constructive support. Such clowns don’t allow the fact that their knowledge of the game amounts to zero, to prevent them from having their vapid say and, once again, Bamford was the favourite target. Clearly, these bright boys and girls will not be happy until he’s relegated to the U-23s, at which time they can turn their fire on some other hapless individual.

Despite the fact that Patrick Bamford is a tireless worker, a goal scorer who never stops trying even when singled out for ritual abuse, someone without whom the side has usually struggled and who is clearly beloved of his team mates – despite all that, perhaps it’s time to take the spotlight off him for a bit. New signing Jean-Kévin Augustin is waiting in the wings, and – after a bit of indoctrination into the complexities of Bielsaball – he should be ready for his first team bow sooner rather than later. He also seems to be anything but lacking in confidence. Big Kev, as he’s known by some (and now by himself too, if you glance at his Twitter bio) could be the very man to allow Patrick Bamford some much needed “me time” during which he can get his head straight and rid himself of all the negativity and downright hostility some so-called Leeds fans seem to think it’s so cool to project. Lone man up front for Leeds is a big ask, and it may be that Paddy needs a bit of a break.

Not that I would presume to second-guess Marcelo Bielsa, it’s just that I hate to see a lad putting his body on the line match after match, only to be shredded by a few simpering idiots from the safety and non-accountability of their keyboards. It seems to me, from what I’ve been able to glean of Big Kev, that he may be a little more durable in the face of unqualified and clueless criticism. At the very least, he’d have a honeymoon period to allow him to settle in. Or so you’d hope.

I guess though that the famously steadfast Bielsa, who is actually starting to be questioned by some of these hard-of-thinking nonentities, will stick firmly to his own favoured approach – and he will know better than anyone else just how much or how little Bamford is being affected by the online chorus of disapproval. So far, Paddy’s reaction has been defiance, with a post-match comment about having a lot he could but won’t say, and maybe that should reassure those of us with the lad’s (and the team’s) interests at heart that he’ll be able to come through the slings and arrows being flung at him by the online Neanderthals. Let’s hope it stays that way, and that Bamford carries on with his job of shooting us to promotion.

But – if things do become intolerable – there is at least now an alternative. And I’d hope that Big Kev’s endearingly cocksure confidence, together with his evident desire to be at Elland Road and helping achieve Leeds United’s goals, will stand him in good stead if Mr. Bamford does eventually, temporarily, need to be taken out of the dumb clucks’ firing line.

54 responses to “As Some Leeds “Fans” Have Demoralised Bamford, Is It Time for Some Big Kev Swagger? – by Rob Atkinson”