Derby Well Aware of How to Beat Leeds: Concede a Penalty, Go Down to Ten Men – by Rob Atkinson

Genius Lampard, wondering how early to concede that penalty and go down to ten men

There are no flies on Derby County supercoach Frank Lampard. All season long, he’s been pointing out that anything Marcelo Bielsa can do, he can do at least as well, or even better. When Bielsa gave his Powerpoint presentation in the wake of Spygate, Lampard was swift to assure anyone who would listen that “we do that too”. And when Leeds United‘s coach earned plaudits for sportsmanship after insisting that Aston Villa be permitted to score an equaliser at Elland Road, Fearless Frank was there again, insisting that his team also stood back to let the opposition score, and pointing to the evidence of two league games against Leeds this season when they have politely conceded six goals in achieving zero points.

And now, it appears that the Lampard genius has identified the fatal weakness in the Elland Road psyche, whereby the Whites are quite incapable of avoiding defeat when the opposition concede a penalty and are reduced to ten men. Both Wigan and Ipswich have employed this crafty route to victory against Leeds, ridding themselves of their habitual uselessness to baffle the Whites into defeat. It’s a ploy that a man of Lampard’s ability will not have failed to note; stand by for a wild Richard Keogh swipe to bring down Kemar Roofe in the box as he bears down on goal early in the first leg at Pride Park. Red card, penalty – and it’ll be “job done”, as a certain former Rams manager might say.

I jest, of course. The thing is, though – in this crazy season, where the unlikely and the unimaginable have become the norm – something as daft as that could well happen. The only difference might be that it wouldn’t happen in Leeds’ favour. The Whites enter the playoffs at such a low ebb, you can’t help seeing your glass as half-empty, if not drained to the dregs.

Then again, they do say that the darkest hour is just before the dawn. It’s been a pretty dark, bleak month to finish off a dismal second half of the season, so the rosy glow of a new dawn for Leeds United might just be about to light up that far horizon, beyond which lies the Promised Land of the Premier League. You just never know.

Peter Bankes, the referee who has defied the Football League party line to award Leeds a controversial first penalty kick in well over a year, leading to their 2-1 victory over Queens Park Rangers, could now face being sent to Coventry for his sins (they play Luton Town at the Ricoh Arena next Saturday).

Games without a penalty for Leeds United now…

Worse, it is being suggested in some quarters that the errant official could be charged by the ruling body with high treason, an offence that carries a maximum punishment of “a fate worse than death”. When asked what that fate might be, a Football League spokesman would only grimace and shake his head in a deeply ominous fashion whilst mouthing the dread word “Millwall”.

Mr Bankes was not available for comment after the game, it being understood that he was closeted with QPR manager Schteve McClaren and being grilled about what Schteve was sarcastically calling his “X-ray vision”. A Leeds source told us that the referee’s room was closed and locked for an hour after the final whistle, with Mr Bankes eventually being spirited away to Football League headquarters where he is expected to face brutal interrogation over the next 72 hours.

A Leeds source told Life, Leeds United, the Universe & Everything “Our only regret is that we were hoping to have a joint celebration of our centenary in 2019 with maybe a timely penalty late in the season – today’s totally unexpected award has clearly scuppered that. But we’ll take it gracefully and move on. We’d been a bit worried about the actual penalty conversion, there was a bit of chat on the pitch because nobody could remember how it’s done. Every time Marcelo has suggested practising penalties in training, the lads have just fell about laughing. Luckily, Kemar stepped up and sent the lad the wrong way, but he admitted afterwards that he’d been a bit tempted to head it”.

Rumours that United are planning to place a Tourist Information sign on the penalty spot at the Kop End, denoting a site of major historical interest, cannot, as yet, be confirmed. 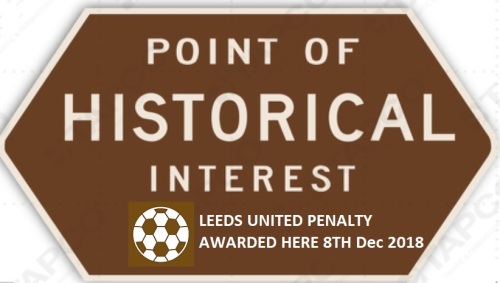 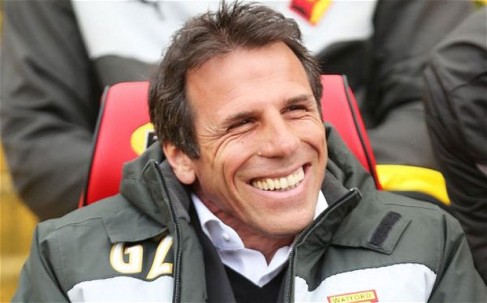 Given the incredible outcome of this game, it would be tempting to dismiss the first 94 of the 97 minutes as irrelevant. That would of course be the greatest injustice to a fine game which had already yielded three wonderful goals; first a brilliant finish from Matej Vydra as the ball dropped from behind him over his left shoulder for a terrific left-foot volley past the helpless Schmeichel. Then the reliable Nugent found space at the far post to rise and guide a great header just out of Almunia’s reach to level the match and put Leicester back ahead, 2-1 on aggregate. Half time, and it was “as you were” with City retaining the lead they’d gained in the first leg at the King Power Stadium.

As the second half progressed, Watford were hammering away and Leicester – although pressed back constantly – seemed to be coping relatively well. Home manager Gianfranco Zola knew he had to change things, and he acted to replace Lloyd Doyley with Fernando Forestieri. Within a matter of minutes, Watford produced a quite excellent team goal, Vydra playing an immaculate one-two with Troy Deeney to score his second from just inside the area. So, we were all square again, and the nearer the match edged to full-time, the more it looked as if an extra 30 minutes were inevitable.

The full ninety had already ticked by and the match was well into six minutes injury time when Anthony Knockaert made his fateful move down the Watford left flank. Showing trickery and strength, he shrugged off a foul challenge outside the box, but then as he progressed into the area, a much lighter touch felled him. As if in slow motion, referee Michael Oliver assessed the situation, failed to call it for the dive it was and pointed to the spot. Watford players were anguished and amazed, Zola on the touchline was clearly stunned, showing with every line of his being that he could see a whole season’s work going up in smoke right at the death. Knockaert placed the ball on the spot as Leicester’s travelling hordes prepared to celebrate Wembley, the penalty was hit low and down the middle but not with great force – and there was Almunia’s trailing foot to stop the ball. Still, Knockaert was closing in on the rebound, surely poised to hammer the ball into the net and finish the matter, but Almunia did it again, rising to his knees to flail an arm at the loose ball, deflecting it to a defender who gratefully belted it out of the area.

And now Lady Luck performed one of those graceful pirouettes for which she is rightly famed. As the Leicester players were still coming to terms with their failure to seal the tie, Watford showed no such distraction, playing the ball out to the right and flooding support into Leicester’s own penalty area. The ultimate end-to-end finale was playing out now, as the ball was crossed from near the right hand corner flag, beyond the far post where sub Jonathan Hogg beat Schmeichel in the air to head down precisely for the onrushing Deeney, who slammed the ball gleefully, unanswerably, into the Leicester net. 3-1 on the day, when it could so easily have been 2-2. 3-2 to Watford on aggregate, when that score had looked like being reversed in City’s favour. The Leicester players stood waiting for the restart as the pitch was cleared of jubilant Hornets fans, transfixed and disbelieving at the turn of events which had seen certain victory turn to catastrophic defeat. A few more seconds, and it was over.

Ironically, of course, if Knockaert had stayed honest and stayed on his feet instead of going down so easily, the game would probably have gone into extra time, and who knows what might then have happened. On such twists of fate are whole seasons decided, and karma had come to Knockaert in its cruellest form, landing the most clinical of knockout blows. He ended up in tears, wandering around the pitch after the whistle, uncomprehending as his desolate team-mates tried in vain to comfort him. Over the two games of this tie, it’s fair to say that Watford deserved to progress, so for once justice was done, and seen by millions to be done in the most dramatic and entertaining manner. But spare a thought for the hapless Anthony Knockaert, hero (albeit with feet of clay) to villain in the space of a few seconds as his world turned upside down. That’s life – and Leicester will continue their life in the Championship next season. Watford, meanwhile, march on con brio – full of confidence. They will now be optimistic of completing their Italian Job and winning promotion at Wembley.