Mirror, Mirror on the Wall, Who’s the Most Hypocritical “Leeds Fan” of Them All? – by Rob Atkinson 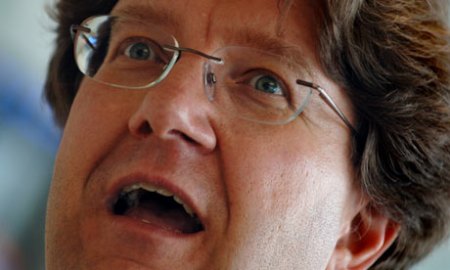 Whichever club you follow, you like to think that your fellow fans are, on the whole, jolly fine fellows – lads and lasses all. Equally, you hold dear the notion that the fans of “that other lot from ovver t’hill” (Man U, for any Leeds fan worth his salt) are a ridiculous bunch, amusing and repellent all in one, fodder for those of us who revel in laughing at the Pride of Devon.  This mind-set prompted me to write about Man U’s Top Ten Embarrassing Celebrity Fans, an article which was, I’m pleased to say, widely read and well-received. I’ve a Spurs version in the pipeline; I do like to pander occasionally to my own petty prejudices.

Every now and then, though, you come across such a repellent example of loathsome slitheriness among the ranks of your own beloved club’s supporters, that you just have to hold your hands up and say: “It’s a fair cop.  We’ve got a right one here.”  It’s happened to me, today.  I’m not talking about the vile Savile (indeed, I have a picture of him in a Liverpool FC shirt).  I’m talking about someone alive, kicking and doing very nicely for himself indeed, thank you.  Ladies and gentlemen, I give you Mark Byford: former Deputy Director of the BBC, new author, Leeds United fan, expenses claimant extraordinaire and enthusiastic proponent of what can best be described as the “Byford Brand” with a view to the ongoing feathering of his own already plush nest.

Mark Byford featured on BBC Radio Five Live just this morning, eager and ready to be interviewed about his first book which was inspired, so we’re told more than once, by a shaft of sunlight shining on the name of a soldier, Larry Byford, on a war memorial in America.  The coincidence of names led Mark Byford to research and write a book about the American Byford, fallen in conflict in Vietnam, along with the wartime experiences of his own father Lawry Byford.  A neat idea and doubtless quite moving.

The wisdom of Byford in sticking his head above the parapet at this particular time, though, might be questioned by some who feel he still has a little embarrassment to live down.  Mark Byford, after all, is the man who walked away from the loss of his job at the BBC with twice his contractual severance entitlement, so that he trousered a cool £1 million on top of his extremely generous final salary pension entitlement.  Perhaps he felt that this sensitive issue would be overlooked in the eagerness of the interviewer to help him promote his book.  Big mistake.

Victoria Derbyshire is one of those interviewers whose sweet and demure exterior belies her underlying instinct to harry her prey; at times like these she is more polecat than tabby.  In the past she has upset the likes of Jamie Oliver with her remorseless style, and when she interviewed her own Five Live boss about why he wasn’t moving to MediaCityUK in Salford when the station moved in Autumn ’11, The Guardian said: “Derbyshire’s grilling of the station’s controller Adrian Van Klaveren made Jeremy Paxman’s infamous interview with (BBC Director General) Mark Thompson look like a vicar’s tea party.”  Now, she sank her teeth into Mark Byford’s pale and exposed hide – and she simply refused to let go.  The basis of her line of questioning was simple: “Do you think you deserved your £1m pay-off?”

Try as Byford might, he was unable to shake Derbyshire from this persistent snap, snap, snap onslaught which in the end left him bloodied and bewildered as she watched narrowly from a neutral corner, fangs still bared, ready to renew her attack at any time. His quandary was clear: he didn’t want to be seen to claim he deserved the money, but he didn’t want to admit that it was undeserved, unjustifiable and contextually grotesque. The word “context”, ironically, was one coping strategy he brandished again and again, though with an amateurish petulance that defeated any attempt at calm or cool.  He was simply out-thought and out-fought, run to ground, his desired cosy “book-plug” interview metamorphosed before his horrified eyes into a pitiless exposé of his self-seeking greed and arrogance.

It was with mixed feelings that I listened to this interview.  At first, I didn’t identify the author being invited to promote his book with the grasping executive walking off into Austerity Britain with his £1 million wad.  I wasn’t even sure why I was taking against him so – perhaps it was the unctuous tone with which he spoke of heroism and duty, whilst all the time emphasising the hooks and links a writer likes to employ to make his work more readable.  Only when Ms Derbyshire switched from plug facilitator into attack mode, did I make the connection – and then I just had to marvel at Byford’s willful resistance to the notion of “moral wrongdoing”, subtly advanced with all the finesse of a battering-ram by the merciless Victoria – as opposed to strict legal and contractual rights and wrongs.  And, blindly, blunderingly, he kept on using this word “context”.  Millions out there must have been wondering – if context is the thing, then in the context of austerity, painfully slow national recovery and widespread suffering, especially at the unregarded bottom of the pile – how on earth can such an obscene level of severance pay, on top of a sleekly fat pension, possibly be justified?

Which is what, time and again, from every direction, try as Byford might to avoid it, he was being asked – and refusing to answer.  Because there is no answer that amounts to justification.  And it turns out that there is much more for Byford to justify, if he possibly could.  A litter of extravagant expenses claims drifts in his wake, going back years – the man has a sleaze quotient an MP might envy.  His new book uses the loss of an American soldier in a long-ago conflict as its prime mover.  I wonder if the soldier’s family will benefit from its sales?  I do hope so.  The e-book edition – which is, after all, just a stream of bits and bytes flowing smoothly from the ether, production overheads negligible – is ambitiously priced at an eye-watering £17.72.  Clearly, somewhere along the line, Byford is still feeling the pinch – or maybe he feels that the Byford Brand commands a unit price of that order, for a first book too, simply because, well, it’s the Byford Brand.

When Lord Birt, outgoing Director General, favoured Byford as his successor, the Governors in their wisdom chose Greg Dyke instead.  Our hero put a brave face on it, and joked away the pain, claiming still to be friends with the man who pipped him.  “He supports Man U and I support Leeds United, and that’s the biggest problem we will have – he supports the worst team in British football and I support the best.”  All good knockabout stuff, and a laddish tone calculated to appeal to the LUFC fan in the street. But for once, I think the BBC got it absolutely right to prefer the Man U fan to the man who claimed as far back as Leeds University days to follow Leeds United – though acquaintances detected no passion for the club in him and suspected that it was a front for his research into criminality among football fans.  As with so much of his subsequent life and career, it would seem that – even back then – Mark Byford was mainly concerned with what was best for Mark Byford and his nascent Brand.

He’s frankly not the sort of bloke I care to have associated with my beloved Leeds United AFC – and nor is he the sort whose pockets I’d wish further to line by purchasing any book he writes.  I happen to think that the singularly undeserving and opportunistic Mark Byford has done quite well enough for himself already.

9 responses to “Mirror, Mirror on the Wall, Who’s the Most Hypocritical “Leeds Fan” of Them All? – by Rob Atkinson”