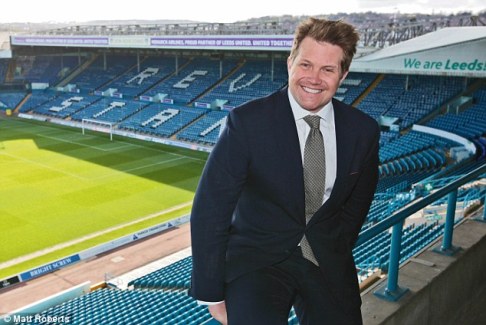 After the initial flurry of excitement this morning – when first Twitter went into one of its periodic #LUFC meltdowns after David Haigh promised “great news” today and then the reliable Phil Hay confirmed it was a major investment that was being talked about – things have developed further.  First, Leeds United themselves confirmed that they had granted a period of exclusivity to an English consortium who would be making a significant investment, to be in place in time for the January window.  This in itself hardly came as a surprise to those of us who had thought Lucas Radebe’s earlier expression of interest would get things moving.  But the Leeds United statement made it expressly clear that the consortium does not involve ex-players (no Lucas) or ex-owners (no Smurf).  Phil Hay then tweeted that the United board are keen to have Lucas Radebe involved with the club, in an ambassadorial role.  Good move, though apparently it’s news to The Chief. Phew.  Busy morning.

Now though, we have an interesting expert opinion from sports lawyer Richard Cramer of Front Row Legal.  He feels that today’s news is clearly positive, but will not necessarily translate into giving United the freedom of the transfer market as early as January. Leeds United, thinks Mr Cramer, seem to be under-capitalised and need money to keep going. This view might well be supported by David Haigh’s own recent injection of a “seven figure sum” in the last week.  On the face of it, that would seem to be a superfluous move if Haigh had reason to expect that major investment would be coming into the club.  But if, as Cramer says, Leeds are still relatively strapped for cash to meet running costs – then maybe Haigh’s million or so was intended to bridge the gap between now and the completion of the consortium’s injection of further capital.

This is not to say that a bucket of cold water has to be poured all over this morning’s excited speculation about “daring to dream”.  While we may not be looking at blowing the rest of the league out of the water in this coming transfer window, it is still probably the case that Brian McDermott will have options in January, and will be able to flex a little financial muscle.

Mr Cramer feels that it is when the Financial Fair Play rules kick in and start to bite that Leeds will truly come into their own.  At that point, clubs will perforce be looking to shed players and reduce expenditure in order to comply with the regulations.  It will be a time when the “naturally big clubs” – including Leeds, naturally, because there are none bigger outside the Premier League – will have a distinct advantage because of their superior income streams.  So Leeds would benefit from operating in a buyers’ market; the cream would rise naturally to the top.

Whether and to what degree this somewhat more favourable scenario would still be warped by the parachute payments of relegated Premier League clubs remains to be seen. I’ve said before that, in any event, I’m not all that convinced about the motivations behind Financial Fair Play – but let’s face it, if in the short term it helped get Leeds back up to the top flight, I’d drop principled reservations of that nature like a hot brick – as I suspect others would also.

It’s going to be an interesting several weeks between now and the end of the January 2014 transfer window.  Will the identity of those involved in this English consortium be revealed?  Will Lucas hop aboard as Ambassador-in-Chief?  Will we be able to chuck our weight around in the transfer market?  My request has already gone up the chimney to Santa – delayed presents this year, please.  Tom Ince from Blackpool and Kevin Doyle from Wolves.  That would do nicely I think, though there will be many, many opinions and we won’t know the thoughts of the only man who counts until Mr McDermott has completed any deals he manages to get done.

Today’s news though is an overall positive, even if it isn’t going to be such a massive boost in the short term.  “Jam tomorrow” is still better than “Pie in the sky, by and by”. The signs are good for the continued revival of our club over the next couple of years or so, with a realistic chance of being back where we all know we belong, back at the top, somewhere in that time frame.  Now that is a dream worth daring to dream.