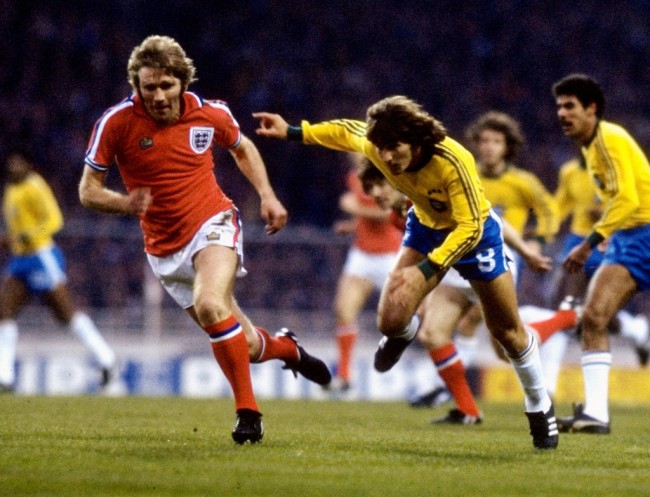 Very happy birthday wishes today for one of my late seventies heroes, probably still one of my favourite ever United players, though his stay was relatively brief and the team he graced was not of that vintage which lit up Elland Road only a few years earlier.  Tony Currie had been the idol of the Sheffield United fans at Bramall Lane, making over 300 appearances for the Blades in a nine-year spell after starting out at Watford.  But he played arguably his best football at Elland Road between 1976 and 1979, winning the bulk of his England caps in that period and inspiring a declining team in Leeds to three semi-finals.  What an option he would have been as part of the great Revie squad – one of the few players I can think of from the post-Revie era who could have held his own in that auspicious company.

Currie made his debut for Leeds United on a sunny August afternoon at Elland Road against newly-promoted West Bromwich Albion.  Coincidentally, Johnny Giles – whose mantle Currie was meant to assume as the creative heartbeat of Leeds – was in the opposition side that day as a 2-2 draw was played out, United coming back from two goals down.  It was my first solo trip to Elland Road and I was right at the front of the Lowfields as over 40,000 packed the ground.  I can vividly remember Paul Reaney right in front of me, looking up and shouting “Tony!” as he played a perfect ball up the line towards the Kop End for Currie – it was the first time I’d realised what a shouty place a professional football field was.  For some reason, that image is burned on my mind; it could have been yesterday. 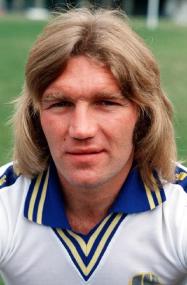 As his Elland Road career progressed, Currie achieved cult status with the Leeds fans.  The chant of “Tony, Tony Currie” was a hymn of adulation to a flamboyant and gifted star – you always thought he was just about to do something special and unforgettable and, of course, he frequently did. One speciality was the volleyed pass out to the wing, invariably finding a wide player in space, the ball dropping perfectly into his path and United were on the attack.  To watch Currie run with the ball, doing that deceptive little shimmy of his to take him past a defender, leaving the guy for dead as he moved upfield, is not something that any Currie fan will forget.  Whilst he was at Leeds, he scored a couple of his most spectacular goals in an England shirt, to my intense pride.  But he frequently had his shooting boots on for United too – who can forget that legendary “banana shot” against Southampton in 1978?  For my money though, one of his finest goals was against Arsenal at Highbury on the opening day of that season, a searing shot into the far top corner from wide right, struck with the outside of his foot and giving the startled keeper no chance at all.  Liam Brady had already scored a wonder goal for the Gunners, but Currie’s superb strike took the honours on the day in another 2-2 draw.

Three losing semi-finals are all that Tony Currie had to show for his time at Leeds, but he provided so many golden memories and is rightly regarded as a legend by those of a certain age who were fortunate enough to see him strutting his stuff for Leeds.  He was an imperious player, a character on the park and a genuine, massive talent who really deserved to play for a team right at the top to crown his career with trophies and medals.  I wouldn’t have begrudged him that, but I was crushed when, with his wife wanting a move back to London, Currie left for QPR in 1979.  It was a bad move for him, though he did get to play in a Cup Final, even captaining Rangers in their losing replay against Spurs in 1982.  But his marriage didn’t survive anyway, and you just wonder how things might have turned out if Currie has stayed at Leeds – although that late seventies decline may have been too steep even for the talented Tony to prevent.

Tony Currie at Leeds was the classic example of the right man at the wrong time; in a better United side, he’d have shone even more because the gifts he had were tailor-made to complement those of the stars that had started to fade or had left the club by the time TC joined.  As it was, we may well have had the best of him during that golden three-year spell, although Sheffield United fans still hail him as their best-ever player.  It was to Bramall Lane that he eventually returned after his playing days were over, working in community roles for the club he’d served so well before moving to Leeds – and even starring as himself in the movie “When Saturday Comes” alongside Blades fanatic Sean Bean.